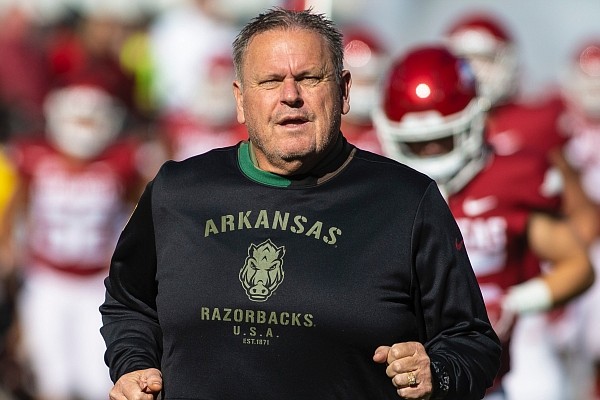 • On Ed Orgeron and LSU: I'm not saying it's right about coaches being fired early, but it's hard on the kids, the fan base and the coaches. It's happening faster now because of the early signing date. Texas Tech hired a coach and it'll be difficult for him between now and then. The kids need to be in mind first and what's best for them.

• The last time Pittman experienced an LSU night game was in 2015 when he was the offensive line coach at Arkansas. He said everyone is expecting the crowd to be lively. There will be a big emphasis on crowd noise in practice this week.

• On penalties: I'm sure people will disagree with me, but on holding, you're probably going to get a couple of those on both sides each game. It's the stuff like when we pick a pass and we hit somebody behind the play that we have to cut out. And then the false starts and offsides penalties, those are coaching. We have to get that fixed. Ones where we forget the snap count, those hurt.

• I've got a strong belief in Arkansas. We came here to try to win football games the best we know how. Going to LSU at night and being favored in Year 2, I probably, honestly, didn't expect that.

• On Larry the Bowling Ball: I sent someone out to find a bowling ball. I sent him to a bowling alley and it was $20. It had the name Larry on it. I thought it was awesome. I told Hunter Yurachek before the game that if we win we were going to bring Larry out. The thing about that is, I said it was like a Super Bowl personally, for me, but I don't know what that's like. I know about the Rose Bowl and national title game. Our locker room celebrated in a big way the other night.

• On Cam Little: Him consoling the Mississippi State kicker after the final miss shows you what kind of kid he is. I'm glad he is on our team. It says a little bit about him.

• LSU's defense: Their nose guard is really good. We've got a nice matchup against him with Ricky Stromberg. I love their linebackers. A lot of talent over there. They'll run a little bit of 4-man line, a little movement and they'll rock one way or the other. Doing a little more zone stuff out of that movement. They had a great blitz package against Alabama. You didn't know where they were coming from. They put Bryce Young in some hot situations. I think they had another week to prep for that game, but they played well. Looked like a top 10, top 5 defense against Alabama.

• The LSU offense wants to establish the run. They're a big counter team. They love that play, and they should. I love the right guard. They have 4 of their 5 offensive linemen back. They have a couple of backs, too, who are quick. No. 21 has got that Ole Miss-type back to him. He can make you miss in a phone booth. They'll run some fly sweeps and a lot of nakeds with Max Johnson.

• On LSU's blitzes last week: We have to speed up our offense a little bit. We were playing a touch slow last weekend. If we can speed up, we can get them out of those packages and looks a little bit. They looked like a fresher, better team with those blitzes.

• On Max Johnson: He's a competitor. His dad played at Florida State, I believe. He's got a really good arm and enough mobility to get away from you. He's capable of scrambling. I remember him out of high school. We tried to get him at Georgia. He's smart, running the offense well and is getting better. They brought in another quarterback against Ole Miss and he proved he can throw it, too. He's maybe a little more mobile than Johnson, but Johnson is playing good ball.

• On the offensive line vs. Mississippi State: I think they all graded out in the mid-to-low 80s. I believe Myron Cunningham may have been the one who got to 85. We dock guys on the line for false starts and things like that.

• On the Golden Boot and rivalry with LSU: I don't know if we'll talk a lot about the past games. There is a trophy and we'd like to have it. It's a wonderful trophy that was here 2 of the 3 years I was here before. I'd like to have it.

• We have a couple of coaches, just two, who will go out and recruit in Louisiana this week.

• LSU's run defense against the Crimson Tide: The stats can be a bit skewed when you factor in sacks. But they were all over the place against Alabama. They played excited. Orgeron had his team rolling.

• On Dominique Johnson's 17 carries: We needed to do what we did with him. We talked Sunday about what could be his max load. I don't know that there's an answer. I think 17 or more is the number if you're going to run the ball 40 times. KJ Jefferson ran it 11. Johnson was running pretty good at the end of the game. We'd probably give him a few more.

• You hire coaches to help you win games and you recruit players to help you do that, too. It's all of us that is helping us win. The pay raise is a neat thing for Jamie and I.