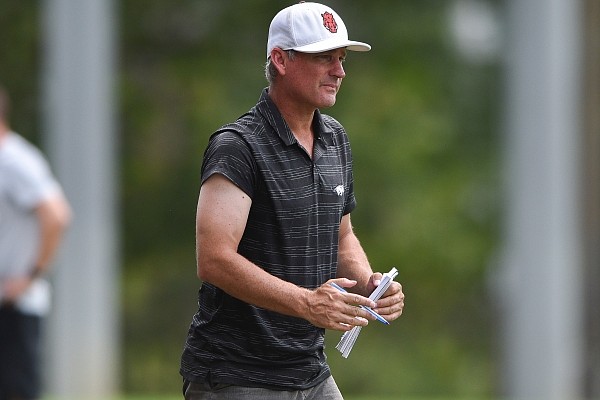 Second-seeded Tennessee blanked top-seeded Arkansas 3-0 at Orange Beach, Ala., handing the Razorbacks their sixth consecutive loss in the tournament final.

Arkansas (16-4) claimed its third consecutive regular-season SEC crown and defeated LSU and Auburn by a combined 7-2 score to reach its sixth consecutive title match. However, the Razorbacks were shut out for just the second time this season.

The Razorbacks have now lost to six different teams in their six tournament final losses.

Arkansas, ranked fifth in the United Soccer coaches poll and fourth in the RPI, will now await where it will be seeded for the upcoming NCAA Tournament. The selection show will streamed today on NCAA.com beginning at 3:30 p.m.

Tennessee, which lost 3-1 to Arkansas in Fayetteville during the regular season, was outshot 17-15 by the Razorbacks. But the Volunteers (18-2) had the 7-4 advantage on frame and notched their 10th shutout of the season.

Tennessee, the East Divsion champions and ranked 10th nationally, withstood an early onslaught by the Razorbacks and got a goal by Wrenne French on a header off a corner kick with just two minutes left in the first half for a 1-0 lead.

Arkansas fired five shots in the first 13 minutes, but managed two the rest of the half. The Volunteers outshot Arkansas 11-7 in the opening half and 3-1 on frame and settled for the 1-0 halftime lead.

The Razorbacks had a great scoring chance early in the second half, but Tennessee goalkeeper Lindsey Romig was up to the task. She turned away shots by Kiley Dulaney and Taylor Malham in the 50th minute.

Tennessee, which won the tournament for the first time since 2008, increased the lead as Jaida Thomas, who was named the tournament MVP, scored just a minute later. Thomas, an All-SEC second-team selection, added an assist on Tennessee’s final goal by Hannah Tillett in the 68th minute.