It's anyone's guess which LSU team will show up Saturday 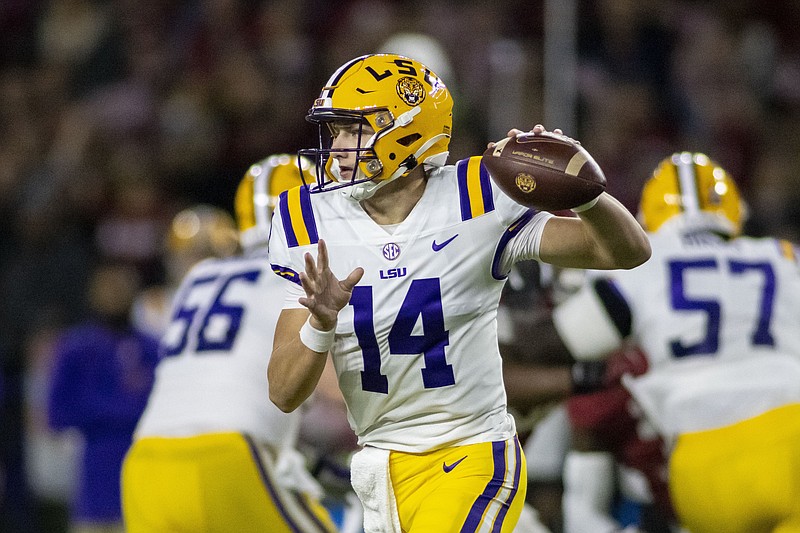 LSU quarterback Max Johnson (14) throws on the run during the first half of an NCAA college football game against Alabama, Saturday, Nov. 6, 2021, in Tuscaloosa, Ala. (AP Photo/Vasha Hunt)

No one, absolutely no one, knows which LSU team will show up Saturday night in Baton Rouge to play the Arkansas Razorbacks.

Usually a night game in Death Valley is something opponents had nightmares about.

Now no one knows if the team that lost to Kentucky by three touchdowns or the one who almost beat Alabama will be on the field.

For sure Ed Orgeron doesn’t know.

Since Oct. 17 — when he agreed to leave the Tiger ship without a fight, to take his $17 million buyout and go away quietly — he has not been in control of the football program.

Many have written that he wasn’t since the 2019 national championship changed him.

They cite things like him not knowing his own players were holding a peaceful march last August, a demonstration he not only didn’t know about but that he asked where everyone was for practice while the march was going on.

That he hired assistant coaches after phone interviews, not face-to-face questions about how they could make LSU better.

That three months after winning the championship with his family at his side, he filed for divorce after a 23-year marriage and soon after was dating someone more than 30 years younger than him.

A former LSU athletic official said, “He’s just not the same person he was in 2019.’

The Orgeron who coached Ole Miss appeared at the season opener this year at UCLA when he challenged a Bruins fan to come down and say that to his face. He called the person, “wearing that sissy blue shirt.”

That Orgeron met his Rebels team by ripping off his shirt and challenging anyone to wrestle.

That Orgeron seemly matured and became the man with the plan when he went 15-0 with LSU in 2019.

Now it looks more like he caught JB lightning in a bottle.

Joe Burrows, a transfer from Ohio State, became a NFL first-rounder under the tutelage of LSU passing game coordinator Joe Brady, who left after one year to return to the NFL.

Since that glorious ride two years ago with Burrows and Brady, the Tigers are 9-10.

Long before the Tigers had some injuries, back on opening day of this season, they lost to UCLA 38-27 and it wasn’t as close as the score. The Bruins are 5-4 on the season.

Apparently, though, Orgeron’s team has not realized that the guy they committed to play football for, the guy they expected to make them better and play for national championships, has quit them.

The Tigers held Bama to 308 yards of offense and just 20 points.

Did that rejuvenate the Tigers or was it their final maximum effort for the coach who is saying all the right things but has already announced he’s taking next year off?

It is highly unlikely Orgeron will ever be the head coach of a Power 5 program again.

It is likely the crown has been too heavy.

In a roguish way, Orgeron is likable. A guy who grew up tough, got tougher and even though he left Larose, La., decades ago, it never left him.

Until that Sunday morning a little more than three weeks ago when he accepted the buyout, no one would have believed he would leave his dream job without a fight.

Instead of ripping off his shirt and saying, ‘Make me leave,’ he shook hands on a buyout with five games left on the schedule provided they let him stand on the sidelines and do the news conferences.

His official date of departure is Dec. 15 with the first of several $2.5 million pay days. The total will be paid over the next two years.

One day, the players who trusted him won’t anymore. Until then, no one knows which LSU will show up Saturday night.