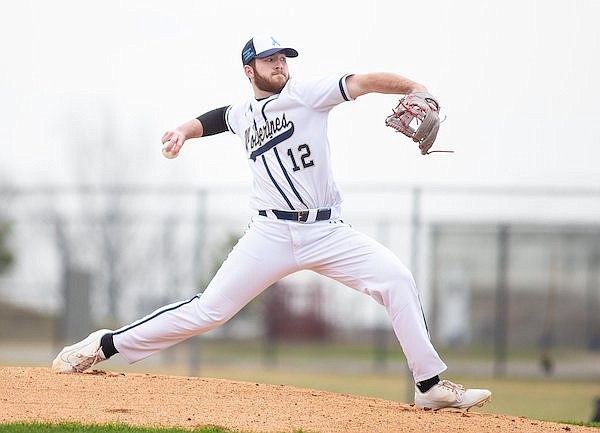 Bentonville West pitcher Aaron Arnold throws during a game against Bentonville on Monday, March 22, 2021, in Centerton.

CENTERTON — Aaron Arnold admitted he felt every emotion possible between the time he verbally committed to play baseball at Arkansas and when he finally signed his national letter of intent with the Razorbacks.

“It was scary, fun — all the emotions you could think of — all at one time,” the Bentonville West standout said. “Now it’s just craziness and being blessed. I thank my coaches and teammates every day for it.”

Arnold signed with Arkansas during Wednesday’s ceremony with five of his West teammates at the school’s lecture hall, about 15 months after he verbally committed to the Razorbacks. He becomes the second Wolverine player to sign with a major NCAA Division I school as Joey Aden signed with Ohio State 2 years ago.

He mostly pitched last season for the Wolverines as he finished 2-5 with 51 strikeouts, 30 walks and a 3.26 ERA in 34.1 innings. He also spent some time as third base and hit .329 with two home runs, three triples and three doubles and 24 RBIs, but he wants to spend his time at Arkansas on the mound.

“It’s the hometown team, and I feel like everybody there will treat me right,” Arnold said. “I feel like I can get the best out of that program development-wise — mentally, physically and all the above.”

Arnold envisions a time when he can become a starting pitcher at Arkansas, but he said he’s willing to come out of the bullpen or even be a closer if necessary if it will help him to reach another level. He considers himself an “energetic pitcher and somebody that can change the game and bring energy to the game.”

He will try to do with a number of pitchers in his repertoire. Arnold said he’s capable of throwing a two- and four-seam fastball, as well as a changeup, curve and slider.

“He’s done a real good job of coming in here and developing,” West coach Chip Durham said. “I’ve been with Aaron since he was 7 years old and played on a travel team. And we put these kids through a lot — probably more than other high school teams do — but it’s all about development.

“We try to get the most out of these kids, and when they leave they are playing to the best of their abilities as they move on. We’re proud of Aaron, and he knows we have a goal this year. This is big, but our goal is also big. We hope Aaron can be a big part of that if he gets locked in and does what he’s supposed to do.”