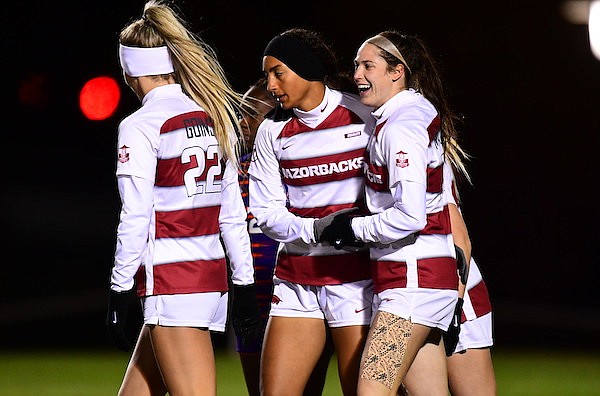 Arkansas midfielder Taylor Malham (right) celebrates with teammates after scoring a goal during an NCAA Tournament game against Northwestern State on Friday, Nov. 12, 2021, in Fayetteville.

FAYETTEVILLE — Taylor Malham deflected a cross into the side netting in the fourth minute to give Arkansas the lead, and the Razorbacks dominated Northwestern (La.) State 5-1 on Friday in the first round of the NCAA Soccer Tournament at Razorback Field.

In a one-sided first half, Arkansas scored four goals on 17 shots and did not allow the Lady Demons to sniff the goal box. The Northwestern State defense suffered a catastrophic eight-minute stretch during which it allowed the Razorback advantage to balloon from 1-0 to 4-0.

In the 18th minute, Emilee Hauser corralled a loose ball at the top of the box and unleashed a left-footed strike past the diving keeper’s outstretched hands. Three minutes later, Parker Goins whipped a service across the face of the goal and Anna Podojil converted a point-blank header. Ava Tankersley capped the first-half onslaught with a precisely placed shot into the bottom-right corner that froze the keeper.

“It was super important for us to capitalize on those chances,” Goins said. “Unfortunately, we were only able to put away one goal in the second half so it was key that we finished those first-half opportunities.”

Northwestern State (12-6-2) pulled one back on its first shot of the game in the 53rd minute. Defender Natalee Henry scored on a header from a cross by her twin sister Nicole Henry. The Razorbacks answered with a left-footed finish inside the 6-yard box from freshman Van Fitch.

“Being up a 4-0, we let our foot off the gas a little bit,” Arkansas coach Colby Hale said. “I think that is pretty normal. It is not up to our standards, but it is human nature.”

Arkansas goalkeeper Hannah Warner was relieved by junior Payton Woodward after facing two shots through 70 minutes. The backup keeper did not see any action in her 20 minutes.

Hale utilized all 22 players at his disposal. He emphasized the importance of having an experienced team and having the younger players gain playing time in important matches.

“When you are playing a postseason match there can be some nerves,” Hale said. “I think this not being their first one was very important.”

After the match, the Northwestern State players joined the Razorback players in appreciating the fans who braved the cold weather. The announced attendance was 1,097.

“I know this team, not just the seniors, really appreciated this moment and we are going to remember this for the rest of our lives,” Northwestern State goalkeeper Acelya Aydogmus said.

The Lady Demons were surprised by the number of supporters at Razorback Field.

“I am used to just seeing the parents in the stands, but I think we did well to handle it,” Northwestern State forward Olivia Draguicevich said.

Draguicevich came into the game with a team-high 12 goals but could not muster a shot against the Razorback defensive line.

In his postgame press conference, Northwestern State coach Stuart Gore was complimentary of the Razorbacks.

“That team is a machine,” Gore said. “They are a team that nobody wants to play. The way I look at it is that we tied the second half, so I will take that.”

Up Next Arkansas is scheduled to host Virginia Tech in the second round of the NCAA Tournament next Friday at Razorback Field.