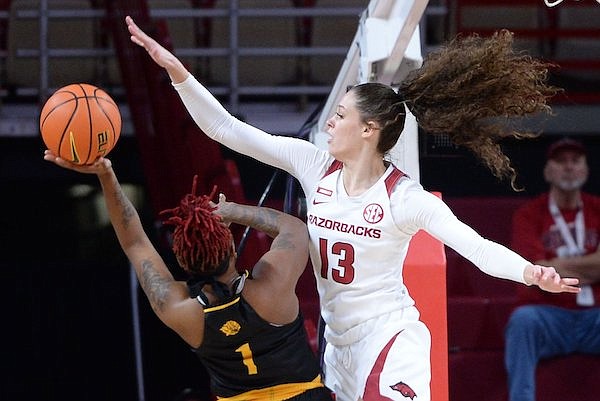 Arkansas guard Sasha Goforth (13) reaches to block a shot Friday, Nov. 12, 2021, by UAPB guard Tyeisha Juhan (1) during the first half of play in Bud Walton Arena in Fayetteville.

FAYETTEVILLE — University of Arkansas women’s basketball team is known for offense, but its defense sparked a second-quarter run that helped the Razorbacks take control en route to a 96-53 win over Arkansas-Pine Bluff on Friday afternoon in Walton Arena.

The Razorbacks (2-0) led 18-13 after a quarter, but held the Golden Lions without a field goal for more than five minutes to start the second quarter to key an 18-1 run that turned the game into a blowout.

The young Arkansas team, which includes five true freshmen, got off to a slow start as the Golden Lions brought aggressive OVERSET FOLLOWS:defensive pressure. But Amber Ramirez, the team’s lone senior, said the Razorbacks found their groove in a 31-point second quarter as Coach Mike Neighbors talked to them between quarters about looking for the open teammate more.

“We just came out with a lot of energy, let our defense lead to our offense, got easier shots I feel like,” said Ramirez, who was one of five Razorbacks in double figures with 11 points — including 3 three-pointers. “He [Neighbors] was emphasizing when you drive to the basket, they’re all collapsing and we got some more kick-out threes, more open layups.”

The Razorbacks collected a pair of offensive rebounds to start the run as Sasha Goforth cashed in a three-pointer. But Barnum followed with three consecutive baskets in transition off UAPB turnovers. She ran the floor and took nice feeds from Daniels and Ramirez on the first two, then got the steal and finished herself on the third for a 27-13 advantage.

Daniel finished the flurry with a three-point play — converting a layup off another UAPB turnover and adding the free throw. Joyce Kennerson broke the scoreless streak by hitting one of two free throws at the 6:24 mark, but the Razorbacks added six more before Sade Hudson scored in transition for the Lady Lions’ first field goal of the quarter to make it 36-16 with 4 minutes, 31 seconds left before halftime.

Neighbors said the defense was what got his team going.

“Obviously, we tend to play better when we can play in transition,” Neighbors said. “It got us some transition opportunities, got us a little bit of separation and then it really started to click. That was a good quarter for us. It was definitely spurred on by the defense.”

Arkansas led 49-22 at halftime and pushed the advantage to 76-32 after three quarters.

The Razorbacks enjoyed plenty of balance offensively, led by Barnum and redshirt freshman Elauna Eaton with 15 points each. True freshman Samara Spencer, who was making her first start, added 14, while Sasha Goforth and Ramirez chipped in 11 each.

Hudson was the lone player in double figures for the Golden Lions (0-2).

The 6-0 Eaton hit four three-pointers and added a team-high seven rebounds for the Razorbacks.

Neighbors said Eaton, who missed last season because of a knee injury, could flourish in a role coming off the bench. He even made a comparison to Kelsey Plum, who was an All-American for him at the University of Washington and was named the WNBA’s Sixth Player of the Year this past season for the Las Vegas Aces.

“She continues to be a spark,” Neighbors said. “She rebounds the ball really well for us. In a gym like today where it wasn’t as packed, she’s talking all the time. She’s really vocal. Her teammates in the lineups that she’s in thrive around that. She’s in the right spots defensively an awful lot of the time.

“She’s really given us a punch. I watched the WNBA season. I watched Plum all the time and Plum doesn’t start. A lot of their games it would be a close game and then that rotation would come in … and then pow, all of a sudden, it’s a 12 or 15-point game. If she [Eaton] will settle in and have that role with her and Amber … those two kids have given us an awful lot at that position.”

Arkansas hits the road for the first time this season as it will face No. 2 Connecticut at noon on Sunday. The Razorbacks knocked off the Huskies 90-87 a year ago in Walton Arena.