What Sam Pittman said looking ahead to Alabama week 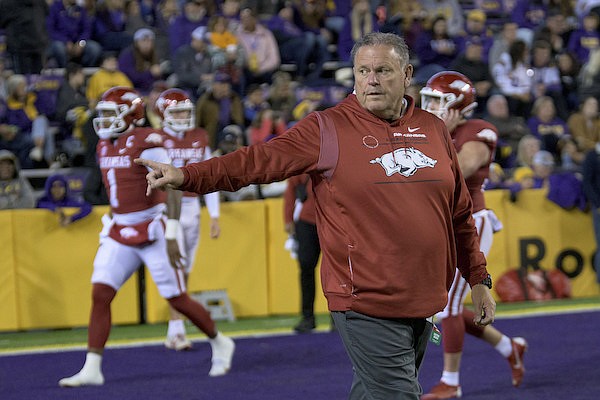 • Pittman said Alabama pass rusher Will Anderson is a major difference maker who will be a focus this week.

• Pittman said there are a few offensive lineman at Alabama who he tried to recruit to Georgia, but lost the recruiting battle.

• Pittman called Nick Saban "the best coach in the nation and has been for a long time."

• Pittman said he thought defensive back Myles Slusher and defensive tackle John Ridgeway played well at LSU. He said the linebackers "were everywhere" and played "outstanding."

• KJ Jefferson took the game over at LSU, Pittman said. It was a difficult game because LSU brought so many blitzers.

• Pittman said receivers have to be more aware of what is going on.

• Pittman said Kendal Briles did a good job of adjusting to a slide protection for Jefferson, but said the Razorbacks can't go ahead with always having a tight end chipping against the opposing team's best pass rusher.

• Pittman is frustrated with the pre-snap penalties. He said they are trying in practice, but it's not getting fixed.

• Pittman said Alabama's style is not to blitz like LSU did.

• Pittman said the Razorbacks' blocking in space has to get better, whether it is a lineman downfield for a receiver on the edge.

• Pittman said he "likes where the program is headed" in light of winning its seventh game. He said in the SEC West there are no easy games. "It's not necessarily about the number of wins over what the expectations, to me it's about how you're playing. Is the team playing hard? Do you have a chance to win. Sometimes the ball doesn't bounce your direction and you played a good football game."

• Pittman said Mississippi State and LSU were "very physical" the last two weeks. He said Arkansas was physical in those games, too.

• Pittman said "you have to get into a fist fight" to beat Alabama, referencing the physicality the Crimson Tide show.

• Pittman said Rocket Sanders is beat up. His snap count was low vs. LSU.

• Pittman said he thinks Arkansas has a chance at Alabama. "The No. 1 think you have to do to go beat a team is believe you can do it."

• Pittman remembered the 2014 Arkansas-Alabama game when he was the Razorbacks' offensive line coach. Arkansas lost 52-0 to Alabama the year before, but in 2014 the Razorbacks lost 14-13. He said the biggest difference in those two games was the 2014 team believed it would win.

• On Bumper Pool, Pittman said he is well prepared and plays hard. He referenced Pool's earlier comment about the linebackers being so good they feel they have to beat the others to the ball. He said that was what it looked like happened at LSU.

• On Treylon Burks being left off the list of Biletnikoff Award semifinalists, "He would win it if I was voting....I would say if you ask our opponents he's the real deal and worthy of being on that list."

• Nathan Parodi will do some work today after not being able to play at LSU. He was in concussion protocol.

• Pittman said he is relieved the Alabama game is not at night because of the short turnaround to Missouri the next week.

• On Trey Knox's unsportsmanlike penalty, Pittman said Knox should have gotten out of that situation. "All (talking) does it get penalties. He knows that and thinks the same."

• On the football and basketball teams being ranked simultaneously for the first time in nearly 23 years, Pittman said, "I think it's pretty good for Arkansas." Pittman said he hasn't been able to follow the basketball team much to this point, but will once football season ends.

• Arkansas is still mathematically eligible to play in the SEC Championship Game, along with several other SEC West teams. Alabama can clinch the division with a win this week. Of still being in the mix, albeit a slight chance, Pittman said, "To still be alive in Week 11, it's hard to do and I'm happy we have that opportunity."