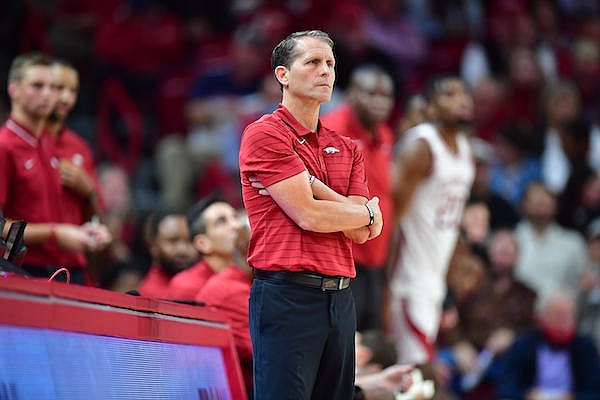 Arkansas coach Eric Musselman is shown during a game against Mercer on Tuesday, Nov. 9, 2021, in Fayetteville.

A very happy Eric Musselman got the opportunity Monday to discuss his latest two signees and Arkansas' heralded five-player class.

"As a college coach, it's graduating your players and getting them ready for the real world,” Musselman said. “It's winning, it's attendance and it's recruiting. You kind of have those five pillars that all of us are striving for.

“It's great company to be in. It's hard to be in the top 10 let alone in the top three or four or whatever. I think the big thing is you want those players, when their time is up, (to have) developed properly and go on to have great careers. I'm ecstatic with each of them.”

Musselman is overjoyed to have all five players signed in the Nov. 10-17 early signing period rather than waiting until the April 13-May 18 late signing period.

That was not the case with Musselman’s banner 2020 signing class that included Arkansas products Moses Moody, Jaylin Williams, Davonte “Devo” Davis and Khalen “KK” Robinson and was ranked fifth nationally.

“I thought the class with Moses, Jaylin, Devo and KK, I thought that was a phenomenal class,” Musselman said. “Didn’t know if we would get four guys of that quality in the same class, but maybe two or three.

“But to have this class of the group of guys talent-wise, but also as people and then to have them sign (early) ... you go back in time, Devo was the only one that signed early.”

Musselman said signing the players early gives way to he and his staff having more interaction with the players.

“It allows us to have a more in-depth relationship,” Musselman said. “There is a limit to only see the guys seven times if they are not signed. And we were about up on a couple of them, and so this changes (things). We can see their games. We can talk about them.

“I think it’s important moving forward both for the player and for us that it’s more than just (a) verbal commit, because there's things pertaining to the rules that we're now able to do some more things with like watch them unlimited (times). They can come on campus during dead periods. There's just a lot of little things people don't realize.”

Smith had a public ceremony on Saturday before a packed crowd at JJ’s Grill on Dickson Street in Fayetteville.

“Nick is a special, special player,” Musselman said. “He was as good as any player at the highest, highest level of AAU. I don't think there was anybody at the guard spot, I don't think I saw anybody even close to him at times confidence-wise, being able to go from an off guard to a point guard.”

Smith joins Walsh, ESPN’s seventh-ranked player in the 2022 class, to give the Razorbacks two 5-star prospects and top 10 players nationally.

“Jordan, it is just incredibly exciting to watch Jordan play,” Musselmam said.  “He's electric. He can play a lot of different positions.”

Ford is ranked as ESPN’s 68th-best player in the country.

“Derrian is a guy that's so strong, so explosive,” Musselman said. “I think each guy we have now in this class possesses something special that makes them unique to our system."

“I think to keep the three in-state guys was really important,” Musselman said. “All three talented, all three bring a different dimension. They’re all three from in-state, but all the guys are important, but five of them have significant importance to us.”

"I think each recruit, they've got their own little story, your own little relationship,” Musselman said. “The relationship with Derrian and his parents was pretty consistent throughout the whole thing.

“The relationship with Nick is really unique. He was kind of quiet, but as soon as he came on that visit, our relationship just completely changed in a positive way where the comfort level of he and I talking and his conversations with the staff (improved)."

Musselman was surprised with the Smith transition.

“I don't know if I've ever seen a relationship go in such a quick, positive way,” Musselman said. “Sometimes, conversations when you're recruiting, some of them are great, some of them are a little more trying to pull things out of them.

“Talking to Nick right now is as comfortable as I could be talking with anybody. Same with Jordan. All of them really. Those two guys, it's pretty easy, free-flowing conversation, as it is with Barry and Derrian and Joseph and all the guys."

While Arkansas will still look for transfers in the future, Musselman says he is having a sea of change in how he goes about it.

“That’s why this class is what it is, because we understand the significance,” Musselman said of signing five high school players. “Transfers, quite frankly, are being completely over-recruited right now. There’s a lot of mistakes in the transfer market — a lot. It wasn’t that way four years ago, but now, a lot of Power 5s are going after transfers that probably aren’t Power 5 players, to be completely honest.

“The high school market, we made a conscious effort a year ago to let everybody else go chase transfers and let’s try to get involved with some of these high school guys. I’m happy we did it that way, to be honest.”