Ford's hometown turns out for signing 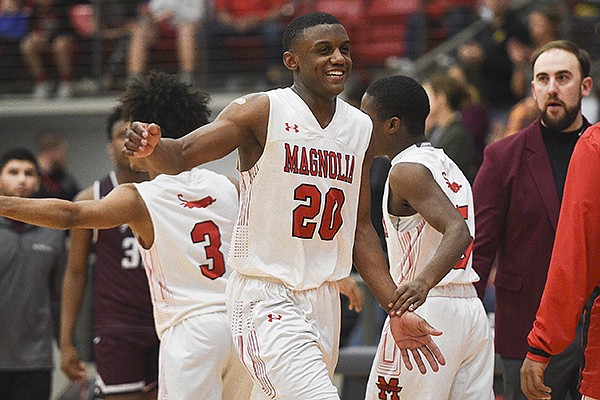 MAGNOLIA — Magnolia was brimming with joy during Sunday’s signing ceremony of ESPN 4-star shooting guard Derrian Ford as he signed his national letter of intent with the University of Arkansas.

Several hundred supporters filled the seats of the new $8.5 million Magnolia Performing Arts Center. Being about 20 minutes from the Louisiana border, the town does have some LSU fans, but the majority of the population cheers for the Hogs.

“Ninety to 95% love Arkansas,” Magnolia basketball Coach Ben Lindsey said. “It’s a big deal here. You see a lot of Panther Red, but you see a lot of folks out here in Razorback Red, too.”

Family, friends and other supporters started filing into the building about 30 minutes before the start of the ceremony.

Ford, 6-5, 205 pounds, signed with the Hogs over more than 20 scholarship offers from schools like LSU, Baylor, Kansas, Alabama, Auburn, Florida, Vanderbilt, Ole Miss and others.

Magnolia superintendent John Ward and the community are proud of the Ford they know off the court.

“I think I treasure more the off-the-court Derrian, as much as I do on the court,” Ward said. “It all gets put into perspective when you realize how good of a young man he is. His athletic ability is special and him choosing to stay here when he had opportunities to go other places, just speaks highly of his character and how much family means to him, how much home means to him and we could not be more proud of him.”

Ford, who has a 4.0 grade point average, excels in everything he’s involved with, including an internship at the Performing Arts Center.

“He kind of manages this building,” Ward said. “Takes care of it. He’s take such a sense of pride in this facility just like in everything he does in life. Watching him perform in choir, he has the same work ethic, the same drive, the same determination in choir as he does on the basketball court.”

Magnolia has produced former Razorback linebacker J.J. Jones, who played for the Hogs in 1996-2000 and former Arkansas infielder Matt Goodheart. It’s believed Ford is the first Panther to sign with the basketball Hogs.

“He’s the most highly-decorated player that’s ever come out of Magnolia,” Lindsey said. “We’ve had some really good ones to come through here, but you’re talking about the Gatorade Player of the Year in the state of Arkansas. So for a town of 11,000-12,000 people, that’s a pretty big deal. He’s a generational talent in a town like that.”

While the town is elated Ford is a Razorback, Lindsey said it was expected.

“I think most people here couldn’t imagine him going anywhere else,” Lindsey said.

Ward said the community would’ve supported Ford regardless where he attended college, but signing with the Razorbacks was a plus.

“We were ready whatever color Derrian had on,” Ward said. “We’re glad it’s Razorback Red. Everyone was excited for Derrian.”

Ford led Magnolia to the 2019 and 2020 Class 4A state titles as a freshman and sophomore while being named tournament MVP both seasons.

Lindsey said his favorite Ford memory is when he received a text from him prior to the 2020 state tournament when the Panthers finished 26-0.

“I wake up at 3:30 in the morning from a text from him,” Lindsey said. “Basically he’s telling me he won’t let us lose and he’s going to win it for me. He’s going to make sure we win it and he’s good to do it for me.

It was kind of like in ‘Hoosiers’ with Jimmy Chitwood when he said, ‘Give me the ball, Coach. I’ll make it’. That was kind of a moment for me when Derrian basically said. ‘Coach, I’ll make it.’ And he did.”