Highlights from Eric Musselman's first radio show of the season 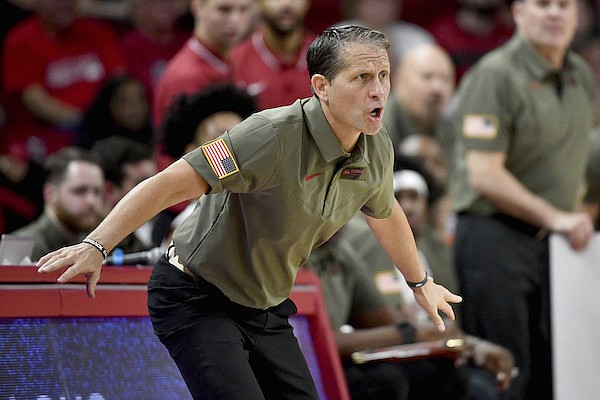 Arkansas coach Eric Musselman reacts to a call against Gardner-Webb during the first half of an NCAA college basketball game, Saturday, Nov. 13, 2021, in Fayetteville. (AP Photo/Michael Woods)

The Razorbacks (2-0) have beaten Mercer and Gardner-Webb in the regular season, following close exhibition victories over East Central (Okla.) and North Texas. Musselman said the last few games have been focused on “plugging holes” identified in the preceding games.

“It was rebounding at first, so we’ve taken care of that the past few games,” Musselman said. “It was shot selection, sharing the ball, (then) we come out and have more passes than we have since I’ve been a head coach (vs. Gardner-Webb).

“Now we’ve got one glaring weakness and that’s defending the three ball. We’re at the bottom of the NCAA defending the three through two games. Same drills we did two years ago when we led the nation in defending threes, so we’ve just got to keep working at getting better at some of our defensive principles.”

Musselman spoke highly of Arkansas’ next three opponents, beginning with Northern Iowa, which is scheduled to play the Razorbacks in Fayetteville on Wednesday at 7 p.m.

“I think they’re the most veteran team in all of college basketball from an experience standpoint, playing at the same place,” Musselman said. “We cannot bring our B- or C-game and expect to win. If we don’t bring our A-game they’re going to do what they do every year, which is upset somebody and come away with a big win.”

The 16th-ranked Razorbacks are scheduled to play Kansas State next Monday at the Hall of Fame Classic in Kansas City. Arkansas will play either No. 10 Illinois or Cincinnati the following day.

“All three teams that we would potentially play are resume-building type games,” Musselman said.

Chuck Barrett, Arkansas’ play-by-play voice and the host of Musselman’s radio show, pointed out he had been impressed with the Razorbacks’ ability to go on runs in each game so far, such as a 27-5 run to close the first half of the Gardner-Webb game last Saturday that put Arkansas ahead 42-26 at halftime.

Musselman said when it comes to runs, he draws on the words of his late father Bill Musselman, a former college and NBA head coach.

“He always felt like there were three runs in every game. Can you control two of the three runs?” Musselman said. “If your opposition has a scoring run, how do you keep that at an 8-0 run instead of a 16-2 run? One word I would use with our team so far in a small body of work is spurt-ability, if that’s even a word.

“We have the ability to kind of score in spurts. We’re still trying to figure out how we can play better first halves, but I would rather come out with a win and have a good second half than come out in the first half and fade at the end of the game.”

On multiple occasions, Musselman said the Razorbacks have yet to identify their leaders this season.

“The leadership in the locker room is really, really important,” Musselman said. “When I watch our football team...when I watch Bumper Pool, I watch Grant Morgan, I watch KJ (Jefferson), those guys are keeping the team together. You can just see it sitting in the stands, you can see their leadership.”

Musselman said graduate transfers Justin Smith and Jalen Tate were strong leaders last season when the Razorbacks went to the Elite Eight of the NCAA Tournament. He said he would have loved either player to return this year, but encouraged both to go pro because it was in their best interest.

“I knew our locker room was under control,” Musselman said. “If I got discombobulated, lost my mind in a game, I knew Jalen and Justin could keep that team and tell them, ‘Ignore Coach. Do this and this and we’ll be fine.’ We don’t really have that right now.

“Jaylin Williams is doing a great job of being a leader, Devo (Davis) has got it, but those two guys are just sophomores….Au’Diese Toney (a transfer from Pittsburgh) spoke up after the last game in the locker room, which I thought was really good. That’s part of becoming a team is figuring out who’s going to become our leader and who’s going to keep our locker room as a tight-knit group.”

Later, Musselman added: “We’re not there yet as far as who’s got the locker room, who’s going to be outspoken. You never know much about your team until adversity hits, whether it’s adversity during a game or adversity postgame. And then once that happens, how does everybody kind of react to that?”

Musselman said he and his coaching staff are still trying to identify roles for this year’s team, including starting roles.

Musselman said he has seen growth from the returning players, including Williams and Davis.

“We’re asking those guys to step up their game and go kind of from the passenger seat of the car to the driver’s seat,” Musselman said. “There is a process to all that and I think you’ve seen that through 80 minutes of basketball.

“We pride ourselves on trying to recruit players who are big into PD — player development — and who want to get better and expand their games. It’s probably not the right program for you if you don’t want to work and spend time on your own to get better. Certainly during the summertime, the offseason — we don’t even want to call it offseason; to us it’s training season. Our guys take great pride in getting in and doing (work) on their own…so it’s really up to the individual player to expand his game.”

Musselman’s first show aired live from inside Bud Walton Arena to an audience of only students. During a Q&A session he was asked about his impressions of coaching in the SEC.

“I was an assistant coach seven years ago at LSU and I didn’t think it was that difficult to win on the road, quite frankly,” said Musselman, who was hired as Nevada's head coach after one season with LSU in 2014-15. “I know this sounds weird, but I thought the Mountain West (Conference was more difficult) — it’s near impossible to win at San Diego State; their student section walls literally rock. Wyoming’s hard.

“But now things have changed. When I was in the SEC as an assistant at LSU, basketball, quite frankly, was a semi-afterthought at some schools. That’s not the case now. You can go up and down the SEC and every coach at an SEC program is known nationally — surprisingly maybe more than football. There are some football coaches in the SEC that people in some parts of the country don’t know who they are.

“When we play these teams, the resources that have put into basketball the last five or six years, the coaching hires — the league office wanted basketball to be as good as any conference….It’s a great, great league. I actually think the SEC is the best college basketball league right now, by far, and when you start talking about talent and you look at the number of first-round draft picks the last two years, it is the best league in college basketball.”

In response to another student's question about fitting into the history of Arkansas basketball, Musselman relayed a conversation with rapper Snoop Dogg, who was in Fayetteville for a concert the week before.

“He said, 'I remember the UCLA-Arkansas game (in the 1995 NCAA championship),' and he started talking about the players and he knew play-by-play what happened," Musselman said. "He said Coach (Nolan) Richardson was one of his favorite coaches.

"Snoop’s from Long Beach, California, and here we are talking 15 minutes. His bodyguards are trying to throw me out and Snoop’s like, ’No, I want to talk Arkansas hoops.’”