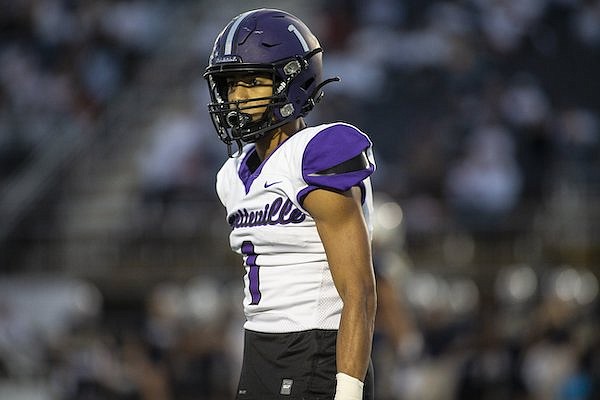 Fayetteville receiver Isaiah Sategna is shown during a game against Bentonville West on Friday, Sept. 24, 2021, in Centerton.

FAYETTEVILLE — Once upon a time Fayetteville’s football team was 2-2, had lost Arkansas linebacker pledge Mani Powell to a season-ending injury and was facing the challenge of a tough 7A-West Conference slate.

The prize for doing so was a bye in the opening round of the state playoffs for Fayetteville (8-2), which will return to action Friday night when it hosts Cabot (8-3) in a second-round game at Harmon Field.

“It’s like I have told people all season, we have some great seniors that are really doing a great job leading our team,” said Fayetteville coach Casey Dick, a former Arkansas quarterback from 2005-08. “There is a lot of experience at a lot of different positions from playing in the previous years. We couldn’t be happier with those kids.”

Both teams are coming in off of wins over Springdale Har-Ber, with Fayetteville knocking off the Wildcats 49-14 two weeks ago and Cabot routing them 53-7 last week.

The game will match two of the state’s most exciting players in Sategna and Cabot’s Braden Jay, who has 1,125 yards receiving and over 400 rushing this season.

Sategna, a 4-star prospect who flipped his pledge from Oregon to Arkansas earlier this month, has caught a state-leading 68 passes for 1,353 yards and 14 touchdowns.

“He’s had an electrifying year and has done a great job in a lot of different phases,” Dick said. “I think he has doubled his yardage from last season and has gotten better from his junior season to senior season, just like he did from his sophomore to his junior season. He really understands the game, his skillset and how to use it.

“He is just electric after the catch.”

Dick compares Sategna to two of his former Razorback teammates.

“He is kind of a cross between Joe Adams and Greg Childs where after the catch he is really fast and physical,” Dick said. “You just never know what is going to happen with him.”

In its game with Bentonville, Fayetteville fell behind 21-7 in the opening quarter before rallying for a 42-34 win.

“I think our biggest weapon this year has been our offensive coordinator Coach Wilkinson," Sategna said. “He draws up all the plays and we have the tools to score a lot of points and get a lot of yards. We also have the best quarterback in the state in Bladen Fike, plus our running back Omar Murray has been looking really good and receivers like Jalen Blackburn, Hayes Robinson and Dylan Kittell, who have stepped up when I’ve been double and triple teamed. They have all just been ballin’ out.”

“We started out playing really tough competition and I am glad that our coaches set it up that way,” Sategna said. “Our starters have not been playing more than two-and-a half quarters lately so we are really gelling and playing the best football it has all year.”

Powell tore his ACL and meniscus in Game 4 this season, but has been locked in as a player-coach since then, according to Dick.

“He’s been crushing rehab and is way ahead of the schedule where somebody should be,” Dick said. “He hasn’t missed a day of practice. He has been out there helping coach our kids, interacting in every way. He knows he is part of our team, part of our family from Day 1. He has done a great job of maintaining that connection.”

“I’m done (playing) until I am a Hog, but rehab has gone well and the goal is now just to get back for the Hogs,” Powell said. “Basically in rehab, I have been getting the strength in my quad back and healing after the surgery.

“I also tore my meniscus, but in walking terms, I will be able to walk with crutches in three or four weeks. As for playing, I should be able to dot that by the time spring practice rolls around.”

Powell has tried to become an extra coach during his injury.

“I want to say these are the times that define how much you love the game,” Powell said. “I could’ve easily stopped coming around it just because of the injury. I make sure I stay around as much as I can. It teaches you taking bad things and turning it into something positive.

“At the end of the day, injury or not, I want the team to be great and I still have goals for the team, and just me knowing injury or not, I need to stay around and help out with the goals.”

He is excited about being a Razorback despite the injury.

“I will say I feel the same exact way,” Powell said. “Basically with the injury, I’m not saying I’m forgetting about my team and what I got going on right now, but I got my focus on right now being ready as a Razorback.

He transferred from Canton (Ohio) McKinley after committing to the Razorbacks in June.

Powell had 81 tackles, 14 tackles for loss, 4 sacks, 2 forced fumbles and 7 quarterback pressures as a junior.   He was named to the first team of the Division I All-Ohio football team by The Ohio Prep Sportswriters Association.

Powell is still happy he made the move.

“It’s always good being in a new place and starting a new beginning,” Powell said. “It turns out this place is everything I thought it would be. I love it here. It’s definitely a place I can see myself being successful.

"The most important thing is the people and the environment turned out to be everything I thought it would be, plus more.”