Razorback signees learn it's got to be the shoes 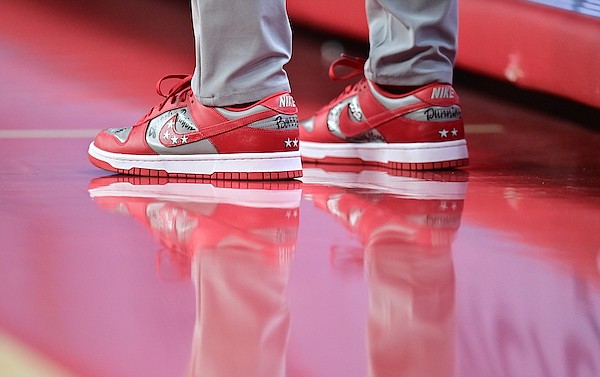 Names of Arkansas basketball signees are shown on the shoes of coach Eric Musselman during a game against Northern Iowa on Wednesday, Nov. 17, 2021, in Fayetteville.

Thinking outside the box is in the DNA of University of Arkansas Coach Eric Musselman and his staff when it comes to recruiting, and one of the latest ideas might be the best yet.

Musselman announced on Tuesday the shoe theme of the Razorbacks’ Wednesday night game against Northern Iowa would be the 2022 signing class and the five names of the historic class printed on the shoes.

The idea got rolling when director of internal operations Riley Hall sent a text to director of recruiting Michael Musselman last Thursday morning.

“He said, ‘What if coach had our signee’s names printed on the shoes for a game.’ and he put the eyeball emojis, and I said ‘Yes, I like that idea’,” Musselman said.

The shoes were sent to Marla Burleson, and the Hogs received them on Monday.

“Coach Muss opened them in front of some of the staff,” Musselman said. “They came out great. She did a great job with them. She kept it real simple.

“We text a picture out to some of our signees and got a good response and decided to put it out on Twitter.”

“The shoes are very tough,” Pinion said. “I’m very excited that he got shoes like that. It is incredible the way Muss does things to set himself apart from the rest of the coaches in college basketball.”

ESPN 5-star small forward signee Jordan Walsh of Branson Link Academy felt honored after seeing what Musselman and the staff did for him and his future teammates.

“The shoes are some of the toughest I’ve seen and the fact my name and my future teammates are also on there makes it that much more special,” said Walsh, who’s ESPN’s No. 7 national recruit.

Burleson, who last year retired from coaching track and field, volleyball and basketball after 30 years, is an art teacher at Riviera (Texas) Kaufer Early College High School. She had a painting business on the side and has seen shoe painting becoming more and more popular.

She’s done 14 shoe projects, including one honoring military veterans for Musselman since August with more yet to be revealed.

“I like working with him because he says I want this logo and then he just lets me kind of do what I feel,” Burleson said. “I enjoy doing that, so I’m able to do my own creative thing.”

“Just shows the love that coach Muss is already giving the incoming freshmen,” Ford said. “He’s different than other coaches. I felt like I was at home when I was on campus.I’m excited to play for the program. I’m ready to go to work whenever I get there.”

Gatorade Alabama Player of the Year and signee Barry Dunning of Mobile (Ala.) McGill-Toolen Catholic was ecstatic after seeing the shoes.

“It is an honor and an exciting moment,” said Dunning, an ESPN 4-star small forward. “Shows how much Arkansas basketball program is built with the foundations of family and togetherness. Also shows us how important we are to the program. Also that Coach Musselman and the Razorback staff swag is untouched. Woo Pig.”

The shoes also caught the attention of two top Razorback targets in the 2023 class.

KJ Lewis of El Paso (Texas) Chapin is an ESPN 4-star shooting guard and the No. 48 overall prospect in the nation for the 2023 class. He was impressed with the shoes.

“Shows how much he [Musselman] cares about his recruits,” Johnson said.

The shoes has received attention from the national and local media.

“We were just talking about it [Tuesday night] before we left about there’s probably some college head coaches sitting there going, ‘Why didn’t we think of that?’” Michael Musselman said.