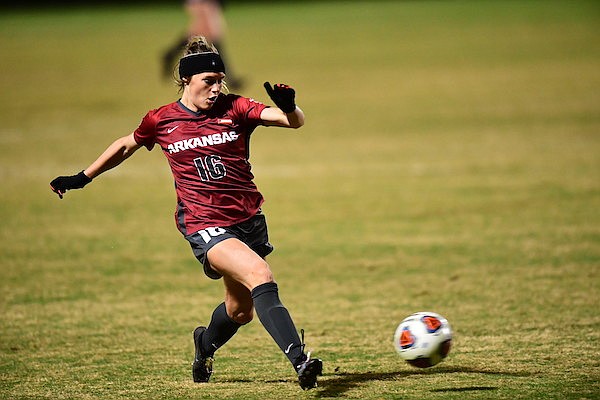 Arkansas' Anna Podojil chases down a ball during an NCAA Tournament game against Virginia Tech on Friday, Nov. 19, 2021, in Fayetteville.

FAYETTEVILLE — Forward Anna Podojil scored in the fifth minute for the first of three Arkansas goals and the Razorbacks shut out Virginia Tech 3-0 in the second round of the NCAA Tournament on Friday at Razorback Field.

Arkansas (18-4-0) will play Notre Dame on Sunday at 4:30 p.m. in Fayetteville in the Sweet 16. The Fighting Irish won 4-3 in penalty kicks over Purdue on the same field Friday.

Podojil, a first-team All-American last season and a former track star, displayed her speed as she raced past the Hokies’ back line and smashed a 20-yard half-volley over the head of Virginia Tech goalkeeper Alia Skinner, who had come off her line. Podojil leads the Razorbacks with 15 goals despite missing three games this season.

“Whenever we get that early goal, it just gives confidence to everyone on the field,” Podojil said. “We are at our best when we are scoring early and often.”

Arkansas also scored a goal in the opening minutes of a 5-1 victory over Northwestern (La.) State in a first-round game. Virginia Tech coach Charles Adair said his team was aware of the Razorbacks’ ability to hit the long ball, but they still could not stop it.

“They like to put you under pressure with those balls over the top and we did not manage the chaos very well,” said Adair, whose team ended its season with a 12-6-2 record.

The Razorbacks dominated possession in the first half and out-shot the Hokies 15-1 through the first 45 minutes. Skinner kept her team within striking distance with multiple acrobatic denials.

“She made some huge saves for us,” Adair said “The score could have been even worse (without her).”

The Razorbacks made the most of their set-piece opportunities to widen the scoring margin early in the second half. In the 53rd minute, Parker Goins delivered a corner kick into a crowded penalty box and Reagan Swindall rose above everyone to head it into the net.

Three minutes later, Swindall booted a free-kick from the defensive third of the field and Kiley Dulaney flicked the ball onto a streaking Goins, who tucked the ball safely to put the Razorbacks ahead 3-0.

“Before the game, we focused on exploiting their backline,” Podojil said. “We knew there was going to be a lot of space in behind and we could take advantage with our pace.”

Adair credited the more than 1,500 spectators for influencing the game on a chilly night.

“I don’t think the girls are used to playing in that type of environment,” Adair said “This is a difficult place to play. That is why they are undefeated at home.”

For Arkansas coach Colby Hale, the victory was a bit of revenge for the double-overtime loss the Razorbacks suffered to the Hokies in 2018 in Cary, N.C.

“We knew this one was going to be different,” Hale said.

Hale dismissed any concern of fatigue when the Razorbacks play again Sunday, despite playing a physically demanding high press style.

“We did it in the SEC Tournament,” Hale said. “It is the third game (in a short time) that causes us problems, but we are built for this.”

After two overtime periods, the Fighting Irish downed the Boilermakers in penalty kicks (4-3) to advance to the third round of the NCAA Tournament.

Emily Matthews got things started with an early goal in the sixth minute off an assist from Sarah Griffith. However, the Notre Dame defense settled in and kept Purdue off the scoresheet for the next 104 minutes before the penalty shootout.

Notre Dame (14-5-2) leveled the score in the 28th minute when Olivia Wingate finished a pass from Sammi Fisher.

In the fifth round of the shootout, a shot by Purdue’s Chloe Woodbeck was saved and senior defender Brianna Martinez converted her attempt to send the Fighting Irish to the Sweet 16.

At a Glance: Arkansas 3, Virginia Tech 0

Notable: This is the second Sweet 16 appearance for the Razorbacks and the first since 2013….Arkansas has never made it past the third round of the NCAA Tournament….The Razorbacks have won all 10 home games this season.