Arkansas vs. Notre Dame in the NCAA Soccer Tournament: How to watch, forecast, notables 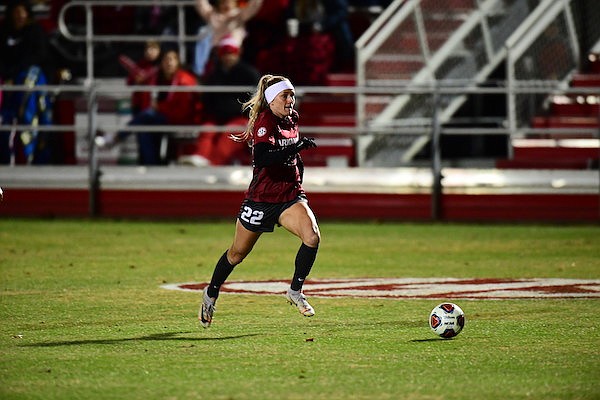 Arkansas' Parker Goins (22) chases a ball during an NCAA Tournament game against Virginia Tech on Friday, Nov. 19, 2021, in Fayetteville.

TELEVISION The game will be streamed on SEC Network-Plus and can be accessed via WatchESPN.com or the ESPN app (carrier login required).

WEATHER According to the National Weather Service, Sunday evening will be mostly clear with a high of 58 degrees and a low of 32 degrees in Fayetteville.

NOTABLE The winner will advance to play Rutgers or TCU in the national quarterfinals next week. The loser will be eliminated....Arkansas was 1-2 and Notre Dame was 0-3 against common opponents this season — North Carolina, Duke and Missouri....Arkansas midfielder Bea Franklin played in 15 games and started four times as a freshman at Notre Dame in 2019....Arkansas assistant coach Sammy Scofield was a four-year starter and senior captain as a player at Notre Dame from 2011-14....Arkansas defeated Virginia Tech 3-0 on Friday to defeat an ACC team in the postseason for the first time. The Razorbacks were previously winless in five games against ACC teams in postseason play....Notre Dame defeated Purdue 4-3 in penalty kicks Friday to advance. The game was tied 1-1 at the end of regulation and overtime....Notre Dame went 7-3 in ACC play this season....Since 2018, the Razorbacks are 34-3-2 on their home field....Arkansas has only advanced to the third round of the NCAA Tournament once, in 2013 when the Razorbacks lost to Duke...Arkansas is hosting a third-round game for the first time.