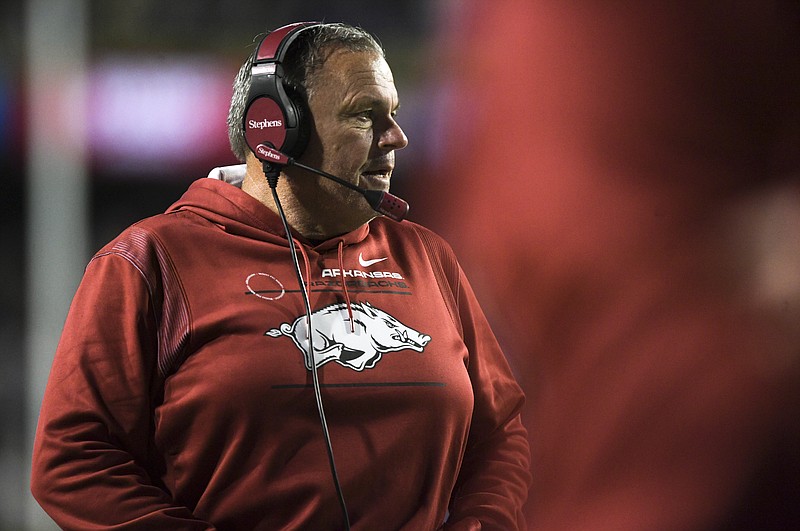 Arkansas coach Sam Pittman is shown during a game against LSU on Saturday, Nov. 13, 2021, in Baton Rouge, La.

The previous football coach at Arkansas had a college degree in mathematics, but it didn’t really help Chad Morris.

That translated into only four wins in two years and a relationship that soured and imploded quickly.

Current Razorbacks coach Sam Pittman has flourished in a similar time frame, winning 10 games in two seasons. And at least three more games are on tap this year.

Because of that, he is happy to have some math of his own to do to make next season's roster the best 85 it can be.

It will be a bit of a chore as there are some covid seniors this season who have a year of eligibility left, but will count against the 85 limit next season when they did not in 2021.

“You might be a little more selective of who you ask to come back, because basically you are saying is he worth a freshman coming in or a (transfer) portal spot coming in to ask him back, because it counts toward your 85,” Pittman said.

Factoring into that equation is also the knowledge there are somewhere around a dozen Arkansas 2022 commits on track to be early enrollees.

That includes all three linebacker pledges in Shiloh Christian’s Kaden Henley; Duncanville, Texas, standout Jordan Crook; and Fayetteville’s Mani Powell, whose knee injury rehab is on schedule to have him ready for spring practice with the Razorbacks.

Pittman may even bring some of the early enrollees in for Arkansas’ bowl practices.

“I am considering that,” Pittman said. “Obviously they have to pay their on way here, so it would be more of the local guys that we would do that with. It just depends on what bowl we get and what date.

“Is it worth bringing a guy in for two or three practices? I’m going to say yes, because we can get some of the medical things done when they still get in here. Then there will still be some acclimation to where they meet different people and understand a little bit and just be more comfortable when they get back. That would have a lot of value to it, too.”

Pittman reiterated his stance on building his program with high school prospects.

“I have said it many times that I believe 80, 85, 90%, somewhere in that range, should be high school kids," he said. "If you are going to build a foundation, you need to do it off of high school kids. Maybe closer to 80%, but you have got to have a few where you can go out to the portal if you lose two or three linebackers. You may need an opportunity to get a young great one out of high school or go into the portal.”

Pittman noted his staff does have a system that helps the program facilitate which players would be worth checking on.

“We have our portal board, but I am not going to share that, because it would seem negative toward the kids we have,” Pittman said. “But we have a portal board where we think if we have three or have five scholarships or whatever it may be, we would go to that area first.”

Putting together the portal board is a group effort, he added.

“We have several, more than just somebody,” Pittman said. “We have a few that if we feel they are like our caliber, SEC caliber, then we get an evaluation from our recruiting department and it is moved on through the process.

“The portal, usually, if they are very, very good, goes pretty fast, so you have to be rolling on that as fast as you probably can. The problem with it is that there is over 4,000 kids in the portal now.

"(There are) a lot of kids going in and not being able to get out.”