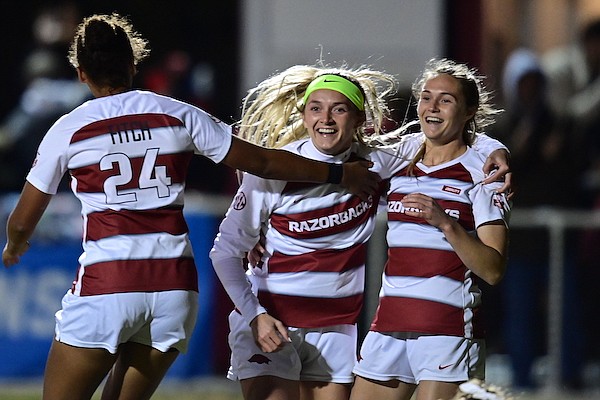 FAYETTEVILLE — Arkansas will play in the quarterfinals of the NCAA Soccer Tournament for the first time in program history.

The Razorbacks defeated Notre Dame 3-2 in a thrilling match Sunday evening in front of 1,579 at Razorback Field.

Taylor Malham scored the game winner for Arkansas on Sunday with a spectacular solo effort in the 78th that wowed both coaches.

“That third goal was just a fantastic shot,” Notre Dame coach Nate Norman said. “She got every single bit of that ball.”

Malham received the ball at the corner of the box, surveyed her runners in the middle and opted to unleash a rocket past the diving keeper. After the ball hit the net, Malham — overwhelmed by excitement — jumped into the arms of her teammates.

The jubilation was short-lived as the team went back to business after the restart. Notre Dame (14-6-2) had a corner kick and penalty appeal in the closing seconds but was unable to equalize the match for a third time.

“When they scored their goals, we just had to calm down and keep fighting,” Malham said. “I think we did a good job of staying focused and finishing out the game.”

The Fighting Irish managed to tie the game twice. Coming into Sunday, Notre Dame was 13-2 in games when it scored twice.

“To get two goals and not win the game is very tough,” Norman said. “I am so disappointed because the season ended but I also have this feeling of pride about how we battled.”

Arkansas scored within 10 minutes for the third consecutive postseason game when Malham guided a bouncing ball into the net off a long throw-in from Parker Goins to put the Razorbacks ahead 1-0. Malham has a career-high nine goals this season despite playing in a defensive wingback role.

The first Notre Dame goal came off a turnover in midfield. Fighting Irish forward Korbin Albert made a quick move around one Razorback defender and gave Arkansas keeper Hannah Warner no chance as she laced a shot into the net from distance to tie the game 1-1 before halftime.

A flooded-box strategy paid dividends for the Hogs in the 54th minute when Goins was able to latch onto a cross. She headed the ball directly into the ground and it bounced over the outstretched hands of Notre Dame goalkeeper Ashley Naylor to give Arkansas a 2-1 lead.

“I think they are honestly the best team in the country at being in the box and getting in front of people to flick balls,” Norman said.

The Fighting Irish found an equalizer through a quick counter-attack breakaway finished by Olivia Wingate to tie the game 2-2 in the 63rd minute.

Arkansas coach Colby Hale credited his super-senior veterans like Malham and Goins for keeping the team composed through the ups and downs of the match. Hale expressed pride in his team’s unprecedented success, but emphasized the Razorbacks are not content.

Arkansas will hit the road for the first time during its tournament run when it plays Rutgers (19-3-1) in the Elite Eight on Friday at 6 p.m., Central in Piscataway, N.J.

The Scarlet Knights are the top seed in their bracket and defeated TCU 5-4 in penalty kicks Sunday. The Arkansas-Rutgers winner will advance to the College Cup in Santa Clara, Calif., which begins Dec. 3.

“They came back for a reason,” Hale said. “They want to compete for a national championship. We are going to Rutgers and (will) give it our best shot.”