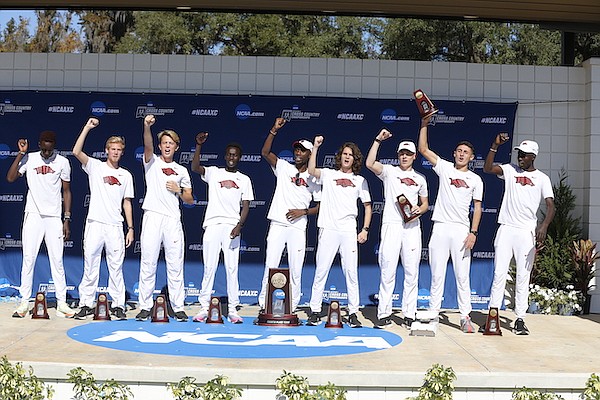 Arkansas runners are shown at the conclusion of the NCAA Cross Country Championships on Saturday, Nov. 20, 2021, in Tallahassee, Fla.

The University of Arkansas men’s cross country team made it back-to-back fourth-place finishes at the NCAA Championships.

The Razorbacks, ranked No. 9 going into the race, took fourth with 195 points on Saturday at Florida State’s Apalachee Regional Park in Tallahassee, Fla.

It was the 22nd time the Razorbacks’ men’s team finished in the top four and 38th time in the top 10, including 11 titles with the most recent in 2000.

“I continue to be proud of this team,” said Arkansas men’s Coach Chris Bucknam, whose Razorbacks won the SEC title. “They gave it everything they had and we beat a lot of schools today.

“We’re amongst the top four in the nation, and you can’t take that for granted.

“That’s a great experience for our student-athletes to compete for a national title. Although we came up short on that, it’s a huge performance for our guys to get on the podium and have three All-Americans.”

Luke Meade, an All-American for Arkansas last year when he finished 38th, missed this season after suffering an ankle injury while rock-climbing in the summer.

“We suffered a blow before the season even started with losing Luke,” Bucknam said. “Our guys never flinched. We moved forward with the team that we had and gave it a great run.

“I know the future is bright with our indoor and outdoor teams. We have more titles to shoot for moving forward.”

Arkansas State University’s Lexington Hilton set a new personal-best time of 30:13.0 while competing as an individual. The junior from Green Forest finished 105th overall, giving the Red Wolves their best-ever performance at the championships.

Arkansas’ women’s team was led by junior Lauren Gregory, who took 19th in 19:46.2 in the 6,000 meters race and earned All-American honors in cross country for the first time.

Sophomore Isabel Van Camp was an All-American for the Razorbacks by taking 37th in 19:54.7 despite losing a shoe during the race.

“Isabel had one shoe come off at 4,500 meters, so she ran with one spike and one sock the final 1,500 and made All-American,” Arkansas women’s Coach Lance Harter said. “That was really impressive. She was not going to be deterred.”

“Krissy started a little slow early, but she passed 134 people from the 1,000 mark to the 6,000 mark, which is remarkable,” Harter said. “That takes a special gift to be able to do that.

The Razorbacks, who won their ninth consecutive SEC championship, had their 16th top 10 finish nationally, including the 2019 title.

“To get eighth in the nation, there’s a lot of people who wish they could do that once in their career,” Harter said. “Some of our freshmen that we were really counting on to help weren’t able to run because they were hurt when they came in.

“The people that we ended up being able to take to the starting line, I thought they competed really, really well.

“We’re excited because we know we have an outstanding team for indoor and outdoor track.”