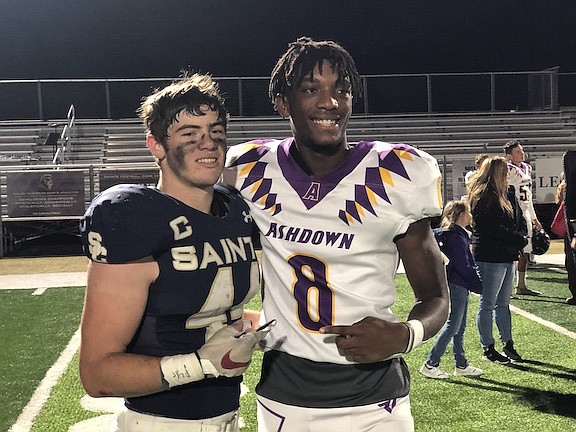 Moments after Shiloh Christian’s 21-0 victory over visiting Ashdown in a Class 4A state playoff quarterfinal last Friday, two future Razorbacks took time for some sportsmanship that included an embrace, a chat and some pictures.

Shiloh Christian senior linebacker and 2022 Arkansas pledge Kaden Henley (6-2, 220) and Ashdown junior tight end and 2023 Razorbacks commit Shamar Easter (6-5, 225) are both as well thought of off the field as they are on it.

“(Easter) is a great player and person,” Henley said. “Our conversation after the game was more about the game, how we respected each other and can’t wait to be on the same team.”

Easter feels the same way about Henley, whose 11-2 team has won its last eight games and now travels to Rivercrest (9-2) for a rematch of last year’s state title game, which the Saints won 58-20.

“He is a good player, a great athlete and a better person,” Easter said.

Count Ashdown coach Matt Richardson, whose team finished 8-3 with losses to a trio of top-5 teams, as a fan of both players.

“Shamar is a selfless human being, an unselfish young man who gives everybody else credit, and when he does something wrong he takes accountability,” Richardson said. “That is what the University of Arkansas is going to get. They are going to get an unbelievable leader and an unbelievable human being. Just a great person.”

Easter had 4 catches for 25 yards and 3 punts over 50 yards, including a 64-yarder, before leaving in the third quarter with concussion-like symptoms.

Henley had double-digit tackles, an interception in the end zone late in the fourth quarter to preserve the shutout, a touchdown run and lined up at quarterback once and threw a pass to starting quarterback Eli Wisdom during the contest.

“Oh, my goodness, he was everywhere,” Richardson said of Henley. “Great player, 100% great player who looks like an SEC linebacker. He is going to fit right in to what (Arkansas defensive coordinator) Coach (Barry) Odom does there and he will be a great player for us, for the Razorbacks, and it is going to be nice to be able to root for him. He was all over the field. Makes a lot of plays.

“He was also very polite. As an opposing coach, he spoke to us and was very polite and his behavior on the field was great. He just seemed like a very good young man. He showed great character and is going to be another one to root for.”

Arkansas linebacker commits Henley, Mani Powell of Fayetteville and Jordan Crook of Duncanville, Texas, are all set to sign in December and enroll at Arkansas in January.

“It's going to help us so much,” Henley said. “Not just the snaps we're going to get in spring football, but just getting adjusted to this college schedule, that's going help a lot, too.”

Easter had 34 catches of 544 yard and 5 touchdowns this season for Ashdown despite drawing lots of attention.

“I looked out there one time last night and we had two guys out and they had five guys over there to cover them and I was like, ‘My goodness,’” Richardson said. “We have had to find different ways all season to get him the ball and we’ll need to do an even better job at it next season.

"He had a great year blocking-wise, receiving and big play-wise.”

The attention was definitely there early in the season.

“The first four games of the season, I think Shamar had six catches and maybe like eight targets, because defenses were double-teaming him,” Richardson said. “He never said a word. I talked to one of the other coaches in our conference and he had a running back and his dad was mad that he wasn’t getting enough touches.

“I told him to tell them that No. 8 (Easter) might be the best sophomore in the country and he only had eight targets in four games and he hadn’t said a word and that is because our kids are selfless."

“My boys up there, they’re doing fine,” Easter said. “Montaric and DayDay (Bishop), them are my brothers up there. Love them boys. They are doing well.”

“It’s been good,” Easter said. “We are trying to get as many people as we can to come up there.”

Henley’s pick was an athletic leaping play in the end zone.

“It was about fourth-and-6 and we were expecting pass there. I don't remember what we had on, but we had on some type of pass blitz or something,” Henley said. “I saw boot and I saw drag and I was the backside backer, so I was just trying to get under the drag and we had pressure up front and the guy threw it to me.”

Shiloh Christian's offense gets a lot of credit for its high-scoring ways, but the Saints’ defense has been stout as well.

“I mean, we've got some guys and they're committed,” Henley said. “We had a whole different game plan this week and we switched up a lot of things. We had a real linebacker playing the three-technique and he's a stud. We switched up a lot of things and we just trusted the coaches no matter what and they had a great game plan and we just executed it.

"They've got some dudes on their side and we're very blessed to come out with the victory, because that's a great football team.

Henley is looking forward to the trip to Rivercrest for a road playoff game, which has been rare for the Saints.

“I mean, it's going to be fun,” Henley said. “I remember Crossett. (My) sophomore year when we went down to Crossett and the atmosphere was crazy. Those people are great people and they were great guests to us and I remember walking out there and it's so loud.