Wagner plans to return for '22 season 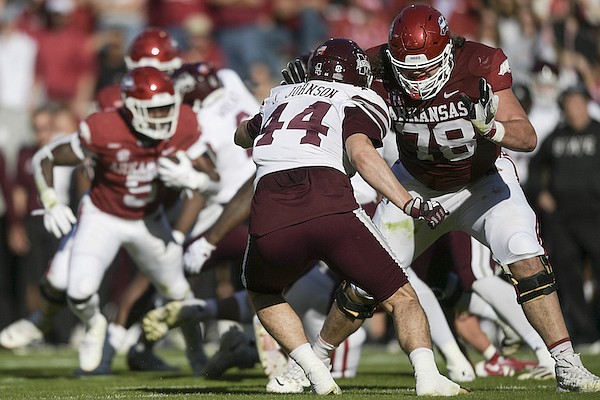 Wagner, a 6-9, 330-pound redshirt senior, has one year of eligibility remaining due to the NCAA’s decision to allow a free year to players who were on the roster during the covid-19 disruption in 2020.

Wagner has been the Razorbacks’ starting right tackle since midway through the 2020 season. He missed three games after undergoing surgery on a finger in October, but returned for Arkansas’ game against Mississippi State earlier this month.

He has started 26 games in his career. He signed with Arkansas in February 2017 and has played for three coaching staffs.

“Dalton’s a really cool guy,” Pittman said. “He told me he’s going to come back, and I asked him a week or two ago. He went through finger surgery and all those different things, and he just said, ‘Coach, I told you I was going to come back and that’s what I’m going to do.’”

During an appearance on Pittman’s radio show last week, Wagner spoke highly about his time as a Razorback.

“Fayetteville has become a new home for me and it’s a special place here,” said Wagner, who grew up in Spring Grove, Ill.

Pittman has said he is trying to talk multiple players into returning for another season, including defensive lineman John Ridgeway and linebacker Bumper Pool.

Pool is the Razorbacks’ leading tackler this season with 107, including 7.5 for loss. Ridgeway, who transferred from Illinois State earlier this year, has 34 tackles, 4 tackles for loss and 2 sacks, and earlier this month was invited to play in the 2022 Senior Bowl.