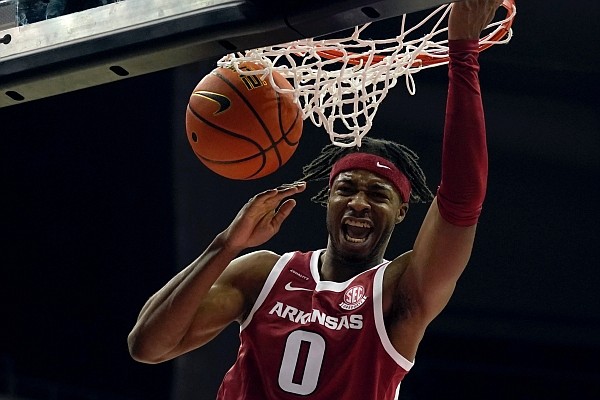 KANSAS CITY, Mo. — A handful of takeaways and observations from No. 13 Arkansas’ 72-64 victory over Kansas State on Monday:

• Stanley Umude may be Arkansas’ X-factor

In three consecutive games now Umude has pieced together some impressive stretches of play on both ends of the floor. The Razorbacks’ win over the Wildcats marked his second straight outing in which he scored in double figures.

It certainly feels like after Monday night that he is on the verge of a breakout performance. And once he gets into a groove scoring the ball, Arkansas can elevate from a really good team to a great one.

Playing alongside a number of other viable scoring options and high-usage players, it seems like he has had to work a bit harder to get his buckets. What is encouraging, though, is that he is not pressing too much, getting great looks offensively and takings shots well within his skillset.

With each midrange jumper he hits, you can see his confidence rise and him playing with a bit more bounce in his step. And Umude already has plenty of bounce, evidenced by the ease with which he throws down dunks after receiving drop-off passes in the dunker spot.

Umude, too, is fueling his offense through defense. His steal on a Kansas State baseline out of bounds play was terrific in terms of anticipation and athleticism, and it led to a huge dunk.

I’ve been impressed lately with his lateral quickness defensively and ability to keep his man in front when tested off the dribble. Umude is also doing some valuable little things — deflections, remaining vertical when contesting interior shots — on that end that will go a long way in him seeing more time in the lineup.

He has a block in each of the last two games and three steals in that time. If he can limit his turnovers, Umude will be tough to sit.

When an Arkansas shot goes up and bounds off the rim, there is a good chance Toney will be in the vicinity, scratching and clawing to gift the Razorbacks an extra possession.

In his Arkansas debut against Mercer, he matched a career high with five offensive rebounds. Against Kansas State, he grabbed six and helped the Razorbacks finish with a 16-8 edge in second-chance points.

Toney is a unique player in that he plays bigger and taller than his 6-6 frame. He simply outworks many of the opposing team’s frontcourt players, and they struggle to neutralize his athleticism with sound box outs.

Toney can twice get off the floor quicker than a lot of forwards can once, and that gives him an advantage when trying to corral 50-50 balls. His instincts on the glass are off the charts and his activity likely wears on his matchups over the course of a game.

According to KenPom data, Toney has grabbed 12.5% of Arkansas’ missed shots when on the floor. That figure ranks 139th nationally and seventh in the SEC.

You would be hard pressed to find a player in college basketball right now, too, who is a better off-ball cutter than Toney.

• The Razorbacks played with some swagger

Particularly in the first half Monday, Arkansas played with more attitude than it had at any point in its first three games.

The opening 20 minutes, Eric Musselman said, was as strong of a stretch as one of his Razorbacks teams has played. Arkansas was tenacious on defense, on the glass and showed plenty of emotion in its first game away from home.

During one impressive sequence there were three “wow” moments. It began with Jaylin Williams’ block of a Kansas State layup, then JD Notae delivered a behind-the-back pass to a running Au’Diese Toney, who finished a layup through contact.

Toney was assessed a technical foul in the game for taunting. Honestly, I didn’t mind it. He was working hard around the rim and made sure his matchup knew he had come to play. Message sent.

Toney is one of the more fiery players on Arkansas’ roster, and I think that can rub off on teammates in a positive way. The emotion he shows throughout games is part of what makes him him.

Davonte Davis, who has not had the offensive start to the season that many envisioned after a big finish to his freshman year, took after Toney in a sense and showed a great deal of intensity after hitting a tough runner off the left block in the second half.

He also finished a layup with some flair in the first half, placing his right hand on the back of his head as he put the ball on the glass with his left. Arkansas’ bench was loving it.

I found these moments to be largely positive. The Razorbacks were feeding off the large Arkansas contingent in the arena and embracing the moment at high points.

Arkansas’ 7-3 forward has started three consecutive games since his opening-night DNP. And on Monday, for the second time in that stretch, he made a big impact.

Vanover was terrific in the first half especially, finishing with 10 points and 4 rebounds prior to halftime in his 12-plus minutes. Arkansas outscored Kansas State by nine points in that run.

He was ultra-aggressive in the lane and vastly more physical when going to the rim than we’ve seen at times in the past. Vanover put a lot of pressure on the rim, and the Wildcats didn’t have much of an answer for that outside of fouling him.

“I thought Connor was great,” Eric Musselman said. “Drawing nine free throws attempted, rolling to the rim hard with high hands, I thought he did a great job for us offensively.”

His activity on the interior led to two quick fouls on Kansas State big Kaosi Ezeagu around five minutes in. Vanover drew five fouls in the win.

He also hit 8 of his 9 attempts at the line. Entering Monday, the most free throws Vanover had attempted in a game in his career was six.

Defensively, he tallied one block in the second half. Vanover has five blocks over the last three games, making it his best three-game shot-blocking stretch since he recorded five against Missouri, Florida and Alabama in February.

Notae, the Razorbacks’ leading scorer, had his first rough outing of the young season on Monday, hitting only 4 of 17 field goal attempts and 2 of 10 looks beyond the arc to go with 5 turnovers.

However, he had the team’s top plus/minus figure at plus-10 and led with 5 assists.

His best moment of the game, outside of the behind-the-back assist early and the steal along the sideline opposite Arkansas’ bench in the first half, came around the eight-minute mark of the second half. Kansas State’s fans were finally into the game.

The Wildcats had pulled within 56-47. Notae quickly recognized a mismatch with 5-8 guard Markquis Nowell defending him and essentially walked him down to the left short corner.

Notae’s strength allowed him to get to the exact spot he wanted, and he calmly sunk a floater over the shorter Nowell. Arkansas went back up 11 and momentarily quieted the crowd.

He had been struggling, but that was a great, pro-like offensive moment from him.

Later, with just more than four minutes to play and the Wildcats within 60-52, he again hushed their fans with a tough runner off the left block, widening the gap. Two of his four scores in the game were very timely.

Notae was out of control with the basketball a handful of times, and he has to be better than three second-half turnovers in a fairly tight game. The player-control fouls late need to be eliminated, too.

He tried to do way too much on a number of possessions.

Notae’s game, though, is well-rounded enough that he can impact the game even when his shot isn’t falling. His scorer mentality allows him to flush the last offensive trip, missed shot or turnover and continue to create. Big buckets can be a result of that fearlessness.

Defensively, he finished with three steals, pushing him to 14 over four games. Eric Musselman is going to live with some less-than-ideal shots as long as he is engaged on that end.

According to KenPom data, Notae’s steal percentage (5.5) ranks 44th nationally. That is a great number.