Arkansas' quick start was too much for K-State to overcome 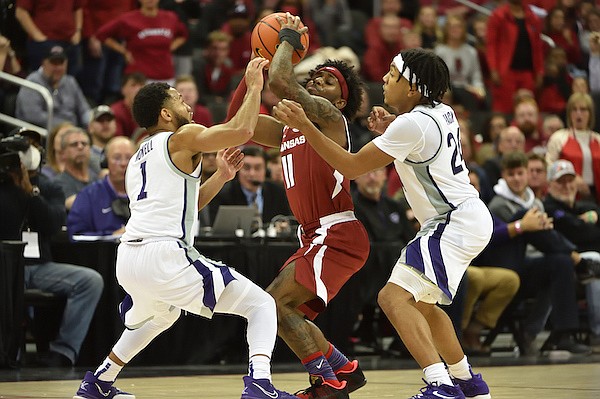 It wasn't something the Razorbacks had done this season.

But Arkansas jumped out to an 18-point first-half lead before fending off the Wildcats 72-64 in the nightcap of the Hall of Fame Classic in Kansas City, Mo.

“They came out and attacked us, they were in attack mode their pressure was, you know, really good," Weber said. "It disrupted us. I guess sometimes at halftime, you take a deep breath and figure it out.”

Kansas State (2-1) outscored Arkansas 40-30 in the second half of a game that both teams shot 3 of 22 from three-point range.

“We just attacked them with the points in the paint in the second half,” Weber said. “ If they're going to pressure us, we just said we got to go at the hoop. I didn't think we went at the hoop in the first half. We  settled and were 0 of 10 from three in that first half, settled with some empty possessions, and then hopefully you know took care of the ball a little bit better in the second half.”

Arkansas came into the game as was one of the nation’s 10 worst at defending the three, while Kansas State was in the top 50 in shooting from beyond the arc.

Chris Lykes and Connor Vanover both had 14 points for Arkansas with Lykes going 10 of 10 late at the free-throw line to put the game away.

“At the end, we just said, ‘Double (Lykes) and make somebody else bring it up.’ But that’s easier said than done,” Weber said. “ He is very, very quick. He was the one that had the ball and you have to give him credit. We put a lot of pressure on him and put him in some tough situations and he was able to keep his poise. He might have lost it one time, but several other times we had no choice but to foul him.”

Weber saw the 7-3 Vanover as a major factor in the first half for Arkansas.

“Connor Vanover, I thought he was really a key for them in the first half; ends up 14 points, five rebounds," Weber said. "Just a very efficient plus-9 on the plus-minus. So he definitely got the advantage over our bigs.”

Au’Diese Toney added 13 points and 9 rebounds, JD Notae 11 points and Stanley Umude 10 points on a night when the Razorbacks went 27 34 from the line to offset 21 of 58 from the field.

“Real intense game, very physical game," Weber said. “Sometimes it's hard to play that way and shoot the ball, relax like you need to."

Weber lamented falling down too many points early.

“You know, make another open three somewhere down the line that could have given us a given us a little better chance, but you know we knew they were going to be good we knew it would not be easy and now you got to move forward," he said. "And you got another very very good team in Illinois tomorrow.”

Kansas State and Illinois, where Weber once coached, play in the consolation game Tuesday at 6 p.m.

“They got their butts kicked you know they're going to come ready to play," Weber said.