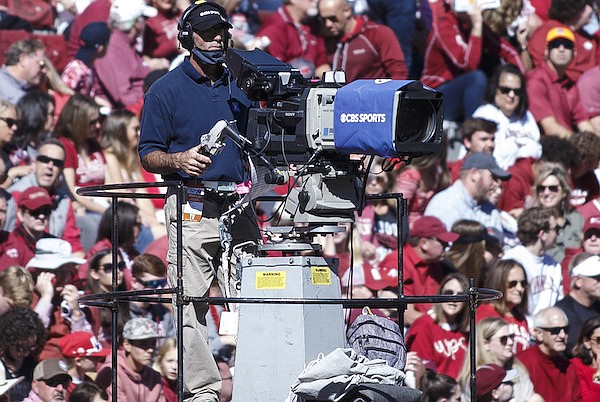 A CBS camera operator is shown during a game between Arkansas and Auburn on Saturday, Oct. 16, 2021, in Fayetteville.

The game on CBS averaged nearly 5.5 million viewers, with a peak of more than 7.4 million during the fourth quarter, according to the network.

The CBS audience edged ABC’s broadcast of the Ohio State-Michigan State game, which averaged 5.3 million viewers. According to ShowBuzzDaily.com, those were the only games to average more than 5 million viewers last week.

The 5.5 million average was the highest for an Arkansas game since the Razorbacks defeated Kansas State 45-23 in the Liberty Bowl on Jan. 2, 2016, when ESPN averaged more than 7 million viewers, according to archived TV figures at SportsMediaWatch.com.

The Arkansas-Alabama game had the 15th-largest audience for a college football game this season, according to SportsMediaWatch, and the sixth highest for a game on CBS.

Alabama has played in front of CBS' two biggest audiences this year. The Crimson Tide's 41-38 loss at Texas A&M on Oct. 9 averaged 8.3 million viewers, and Alabama's 31-29 win at Florida on Sept. 18 averaged 7.9 million.