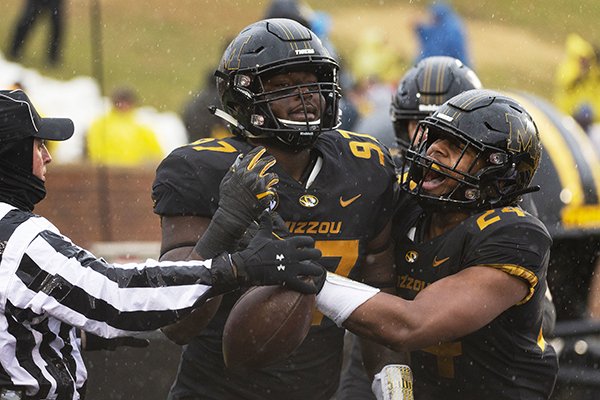 Missouri's Akial Byers, left, celebrates with teammate Terez Hall, right, after Byers recovered a fumble in the end zone during the first half of an NCAA college football game against Arkansas Friday, Nov. 23, 2018, in Columbia, Mo. (AP Photo/L.G. Patterson)

Should he ever forget, two stark reminders loom Friday — reminders the Arkansas coach he once worked for forgot. What Bret Bielema forgot came at Pittman’s 2020 expense in Columbia, Mo.

Friday in Fayetteville it could make Pittman pay yet again.

As Bielema’s 2013-15 Arkansas offensive line coach, that bred within Pittman all the more.

Sure, Arkansas is a small state. Razorbacks coaches must recruit beyond Arkansas.

Pittman did, recruiting stars spanning from Florida to California.

But he certainly appreciated the Arkansans he coached and the Arkansas-born All-Americans he watched from the 1970s through Warren’s Treylon Burks today.

Bielema and staff, with Pittman gone to Georgia, forgot in 2016. They didn’t avidly recruit Fayetteville defensive lineman Akial Byers. They forgot in 2017, not even enthusiastically encouraging Fayetteville receiver Barrett Banister to walk on.

Both play for the Missouri Tigers coming Friday to Reynolds Razorback Stadium off five consecutive successes over Arkansas. Both played roles in Mizzou’s last three.

In 2018, Byers recovered a fumble for Mizzou’s third touchdown in a 38-0 rout, and in last year’s 50-48 victory made three tackles and broke up a pass.

“Probably,” Pittman replied with wry understatement. “They’re good players. I can’t really speak on what happened in recruiting when I wasn’t here, but we don’t want to let our good ones leave the state and especially go play for a team that we would consider a rival.”

Much of Arkansas in general, and the Horton family in particular, didn’t seem to sit well with since-fired athletic director Jeff Long.

If that figured in Arkansas’ preference not offering Banister as a preferred walk-on, Arkansas long pays the price. Banister walked on at Mizzou, then earned a scholarship much at Arkansas’ on-field expense.

Turns out from Arkansas, walk-on All-Americans Brandon Burlsworth and Grant Morgan outplayed much of the alleged Texas best.

To Arkansas’ regret, that somewhat applies to Barrett Banister, too.