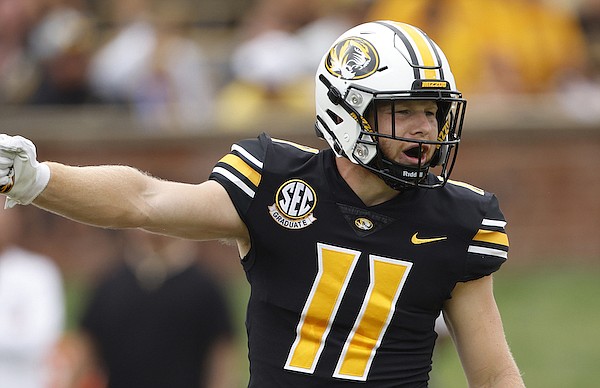 “I grew up at that stadium,” Banister said. “Still have a lot of memories there. I can hear the announcer’s voice in my head right now.”

Byers, like Banister, was a standout player at Fayetteville High School.

“I always went to the Arkansas games when I was younger,” Byers said. “I was a Hog fan at one point.”

Banister and Byers will be on Frank Broyles Field instead of in the Razorback Stadium stands when Missouri plays No. 25 Arkansas on Friday.

Byers is a defensive lineman and super senior, playing his fifth season after the NCAA granted an extra year of eligibility to players because of covid-19.

“Obviously, those guys are going to be excited to play,” said Missouri Coach Eli Drinkwitz, who grew up in Alma. “Fayetteville High School is a stone’s throw away from Donald W. Reynolds Razorback Stadium. So I think there will be some extra nerves there, but they’ve played a lot of football games.”

There was a time when Banister and Byers hoped they would play for the Razorbacks.

Banister took the opportunity to join Missouri as a preferred walk-on, meaning he was assured of a roster spot when he reported for preseason camp as a freshman in 2017. Barry Odom, in his second season as Arkansas’ defensive coordinator after four years as Missouri’s head coach, put Banister on scholarship as a sophomore.

“Coach Odom gave me the opportunity of a lifetime to be able to play in the SEC, play against teams that I grew up watching,” Banister said. “I’ll forever be grateful to him for that.

“Then when Coach Drink came here, he still trusted me to keep me on scholarship.”

Bret Bielema, Arkansas’ coach from 2013-17, offered Banister a chance to try out as a walk-on the following spring.

“That just wasn’t something I was looking to do,” Banister said. “I thought I had proven in high school football that I was a good enough player and deserved a preferred walk-on spot.”

Odom took a tip from quarterback signee Taylor Powell, also from Fayetteville, and reached out to Banister.

“To be honest with you, if [Arkansas] had given me that preferred walk-on spot, I probably would have been there,” Banister said. “But I’m grateful that I ended up here.

“I think God got me in the right place.”

Byers was a 4-star recruit, but a late academic qualifier — after the national signing date — and Alabama pulled a scholarship offer. Bielema didn’t offer Byers because he wasn’t qualified.

When Byers qualified academically, Missouri came through with an offer. Arkansas showed late recruiting interest, Byers said, but he already was committed to Missouri and Odom.

“It’s always personal for me and I’m sure it’s personal for Barrett because it’s our home state,” Byers said. “They very lightly recruited both of us, and we take it personal when we play those guys.”

“I think whenever somebody says that they don’t want you and they don’t think you’re good enough, whether they inherently meant that or not … it put a chip on my shoulder,” Banister said. “It’s been motivation for me throughout my whole college career.”

“Barrett Banister is a young man who came here and has earned everything that’s been given to him, including a scholarship,” Drinkwitz said. “He’s been Mr. Dependable and has embraced his role, no matter what it was.

Byers has played in 51 games with career totals of 81 tackles, 9 tackles for losses of 39 yards, 2 fumble recoveries and 1 forced fumble.

In Missouri’s 38-0 victory over Arkansas in 2018, Byers recovered a fumble in the end zone for a touchdown.

“Scoring my first touchdown against my home state was just crazy,” Byers said. “It’s been a journey. I just wanted to stay the course, always get better each day and help my team win.”

“I just think about his durability, how much he’s played, and then the fact he came back this past year,” Drinkwitz said. “He really committed himself to our football team and being a leader.”

After Tennessee beat Missouri 62-24 on Oct. 2, Drinkwitz fired defensive line coach Jethro Franklin and promoted analyst Al Davis, a former Razorback, to coach the position. Drinkwitz also tore up the depth chart and said players would have to work to win their spots.

“After the Tennessee game, with the changes I made, Akial on Sunday came to my office and was just asking how he could help,” Drinkwitz said. “He was disappointed in how everything was going, and he wanted to know how could he help, and how could he lead.

Banister said Byers has been resilient throughout his time at Missouri.

“I think Akial has just been consistent in his attitude every single day and he showed up for five years now with a smile on his face ready to go to work,” Banister said. “No matter what his job was, no matter what his role was.

“He’s someone that has been a really, really good player for us and a big part of why we’re successful.”