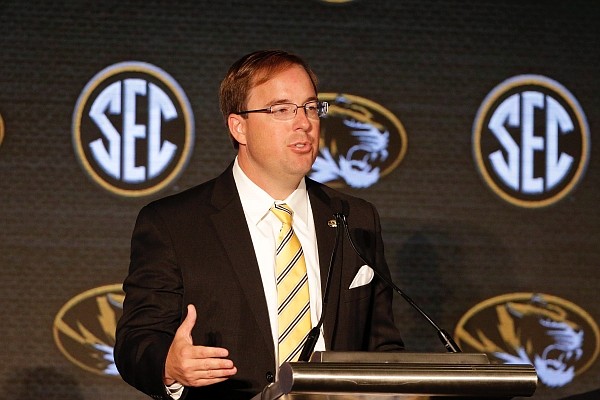 Last summer at SEC media days, when all the coaches were happy, undefeated but cautious, Missouri football Coach Eli Drinkwitz took a cheap shot at the Arkansas Razorbacks.

“I kind of like the rivalry we’ve got with Arkansas,” Drinkwitz said. “I don’t remember the last time they beat us, so I kind of like that one. The Battle Line Rivalry, it’s pretty good for us. I think we’ll just keep that one right now. That’s a good one.”

It was uncalled for and unnecessary.

Indeed Arkansas has lost five consecutive to the Tigers.

Drinkwitz was the head coach for one, last season when they scored 27 fourth quarter points to win 50-48.

Before that he was Appalachian State for one season as the head coach and before that was an assistant coach far from the borders of the Show Me State.

The main reason it was an unneeded cheap shot is Drinkwitz chose to coach Missouri over Arkansas.

Apparently he didn’t care if he grew up in Alma, that his family lives there or that the Razorbacks wanted him.

He either thought the rebuilding was too big of a job or that he couldn’t get it done, and that could make life tough for him in his home state.

Since he was so far away for four of the past five years, maybe someone should explain to him that for two years before Sam Pittman readily accepted the challenge of rebuilding the Razorbacks, the head coach was Chad Morris.

Morris lost to every SEC team during his two seasons, not just the Tigers.

The year before that, when the dye had been cast the previous season, Missouri won 48-45 and Bret Bielema was fired coming off the field. His undoing started the season before, when the Razorbacks were outscored 21-0 after leading 24-7 at the half.

Several of my colleagues around the country who graduated from Missouri texted after the Drinkwitz shot and asked if Pittman had said anything to upset the Missouri coach.

Nope. Pittman had kicked off the final day and Drinkwitz went last.

Pittman was Pittman, honest and open and admitting he was a little nervous.

Drinkwitz took the stage like Chris Rock at an improv theater.

His first season, the Tigers went 5-5 and had two wins against SEC Western Division teams, Arkansas and LSU — and we all know the tide was going out on Ed Orgeron.

Not comparing here, but anyone who watched last year’s Arkansas-Missouri game knows there may have been a trophy, but there were no bragging rights.

It was anyone’s game.

Drinkwitz’s shot at Arkansas even got the attention of his mentor Gus Malzahn, who first hired him at Springdale High School and later at Auburn.

Malzahn told Trey Schaap in an one-on-one interview for 103.7 The Buzz that he might remind Drinkwitz that he will have to go home and visit family sometime.

Pittman could care less what was said. He isn’t about bulletin board material, but about preparation.

There is a lot on this game in Fayetteville on Friday, though.

Arkansas is 7-4 and trying to play into a Florida bowl which would give it exposure in the Sunshine State and national TV.

Missouri is 6-5 and trying to play themselves out of the Birmingham Bowl, which is played on Tuesday, Dec. 28.

They have had two common opponents, both lost decidedly to Georgia (like everyone else) and the Razorbacks beat Texas A&M 20-10 and Missouri lost at home to A&M 35-14.

Should be a great game, whether the Missouri coach thinks so or not.