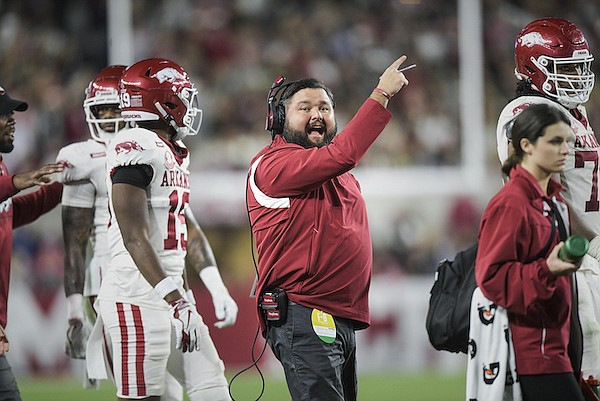 Arkansas offensive line coach Cody Kennedy yells instructions during a game against Alabama on Saturday, Nov. 20, 2021, in Tuscaloosa, Ala.

Arkansas Coach Sam Pittman praised Kennedy and the offensive line in a social media post Tuesday: “So proud of our offensive line and the Joe Moore Award recognition that is well deserved. They are a close group and work extremely hard. Coach Kennedy has done a fantastic job as well!”

“Coaching is about a lot of things, but one of them is can you get your players to play hard and do you know what you’re talking about, and he does both of those outstanding,” Pittman said.

The Razorbacks’ most consistent starters on the line have been super seniors Myron Cunningham and Ty Clary, redshirt senior Dalton Wagner, junior center Ricky Stromberg and redshirt sophomore guards Brady Latham and Beaux Limmer. Cunningham, Latham and Stromberg on the left side have started all 11 games.

Kennedy came aboard as tight ends coach before taking over the offensive line in June following the departure of Brad Davis. Arkansas ranks second in the SEC and 13th in the country with 222.3 rushing yards per game heading into Friday’s regular season finale against Missouri.

That is Arkansas’ highest rushing average since the 2006 team racked up 228.5 yards per game behind All-American backs Darren McFadden and Felix Jones and Peyton Hillis.

The award, named after the long-time offensive line coach at Notre Dame and Pittsburgh, has been presented since 2015 by the Joe Moore Foundation for Teamwork.

The Razorbacks were also a semifinalist under Pittman, who was the Razorbacks’ offensive line coach at the time, for the inaugural award won by Alabama, which also claimed the trophy last season.

The list will be trimmed soon to five finalists, who will be invited to a two-day event in Little Rock on Dec. 6-7, with the winner being announced at a luncheon on Dec. 7.

Missouri has instituted a weekly injury report under Eli Drinkwitz, which goes against the grain of most current college coaches. The Tigers release their list each Wednesday in terms of playing status (out, doubtful, probable, etc.), though it does not specify injuries.

Arkansas Coach Sam Pittman has been particularly guarded about injuries, like many of his peers.

Though the Razorbacks have plenty of players with aches and soreness, their list is short this week. Receiver Treylon Burks is likely to play with an injury to his upper right side. Cornerback Hudson Clark (concussion) is also likely to play.

The list is longer for Missouri, which will put out its official list today. The Tigers have suffered plenty of injuries in their secondary, as safety Shawn Robinson is expected out for Friday, as is nickel back Chris Shearin and cornerbacks Ennis Rakestraw and Ish Burdine. Additionally, defensive end Chris Turner and offensive guard Case Cook are out, while cornerback Akayleb Evans is questionable (soft tissue) and offensive tackle Hyrin White (ankle) is probable.

Arkansas junior Treylon Burks practiced in his normal white No. 16 jersey Tuesday, a further indication the star wideout should be ready to play on a short week Friday.

The Razorbacks wore no green jerseys in practice, which wasn’t a surprise considering they are in light “spider” pads all week.

Coach Sam Pittman announced the Razorbacks would wear smaller “spider” pads throughout the short week of practice, which takes some of the heavy hitting off the players after the grind of the season and the physicality of last week’s 42-35 loss at No. 2 Alabama.

“But for Pitt to allow us to go with spiders the whole week … he’s taking into account the players’ thoughts and our bodies and what we need to be successful this upcoming Saturday,” Cunningham said.

Country music performer Garth Brooks is scheduled to play Reynolds Razorback Stadium on April 23, 2022, at 7 p.m. as announced by the UA and Red Strokes Entertainment on Tuesday.

Brooks, the No. 1 selling solo artist in U.S. history with more than 157 million records sold, will perform in the round in his first appearance in Arkansas in more than seven years.

Tickets will go on sale for $94.95 each at 10 a.m. on Dec. 3 with three ways to buy them: Via Ticketmaster.com/garthbrooks; through the Garth Brooks Line at Ticketmaster at 877-654-2784; or the Ticketmaster app on a mobile device.

Sam Pittman and Eli Drinkwitz spent a portion of their opening remarks in their weekly news conferences to tout the strengths of the other programs.

Drinkwitz spread around the compliments.

“Their wide receiver, Treylon Burks, I believe is one of the top two wide receivers in the league,” Drinkwitz said. “That would be a great contest for him and [Alabama’s Jameson] Williams. Treylon is very special. They do a tremendous job of moving him around. He lines up in a lot of different locations. Coach [Kendal] Briles is really doing a really nice job with their offense and getting the ball to their playmakers,

The CBS broadcast of Arkansas’ 42-35 loss at Alabama last Saturday was the most-watched college football game of the weekend with an average of 5.5 million viewers, including a peak of 7.4 million during the fourth quarter.

Arkansas at Alabama out-drew the broadcast of Michigan State at Ohio State, which averaged 5.3 million viewers.

The viewership numbers were the highest for an Arkansas game since the Razorbacks’ 45-23 win over Kansas State in the Liberty Bowl on Jan. 2, 2016, according to SportsMediaWatch.com.

The folks at SEC Shorts had some fun with Alabama this week, suggesting the Crimson Tide have issues on the offensive line and with defensive inconsistency that could cost them a shot in the College Football Playoffs.

As usual, the messages and images were symbolic, with “Alabama” and his date, “Playoff,” arriving on the doorstep at night. A mask-wearing intruder symbolizing those issues throws water balloons at “Alabama,” who blocks and dodges them while trying to explain that nothing is wrong.

When the issue called “Arkansas Being Good At Football,” whizzes a balloon that causes “Alabama” to dodge backward, he says, “OK, that was a close one,” referencing last week’s 42-35 home win over the Razorbacks. “There might be two or three teensy, weensy adjustments we can make here or there.”