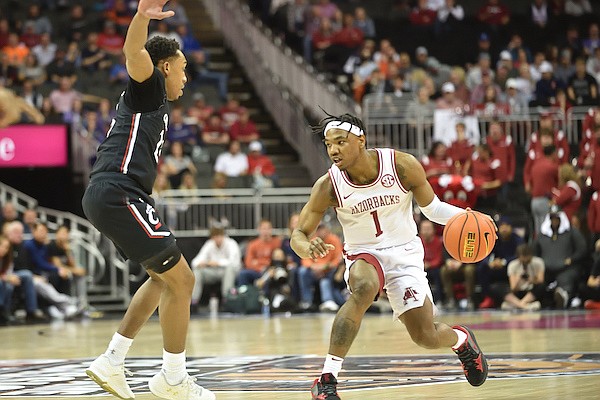 Arkansas guard JD Notae (1) dribbles the ball during a game against Cincinnati on Tuesday, Nov. 23, 2021, in Kansas City, Mo.

Arkansas’ title at the Hall of Fame Classic was impressive given the competition. The Razorbacks defeated a pair of previously unbeaten teams, Kansas State and Cincinnati.

But Arkansas coach Eric Musselman indicated the wins were more impressive because several of his players, including starting guard JD Notae, were under the weather during the trip to Kansas City, Mo.

“JD, in all seriousness, is sick,” Musselman said after the Razorbacks defeated Cincinnati 73-67 at T-Mobile Center on Tuesday. “I mean, he’s been sick for three days. All of us have the cold. I’m sick. It’s going around our team — the common cold. I do think we have some guys dragging, including some of the coaches.”

Notae scored 13 points during the championship game win over Cincinnati. He made 4 of 17 shot attempts, including 2 of 7 attempts from beyond the arc. He was 3 of 4 at the free-throw line.

Notae also made a defensive play that helped Arkansas seal the victory. With the Razorbacks trailing 67-66 and under 1:45 remaining, Notae poked away the ball from Cincinnati guard David DeJulius at the top of the key, then won a sprint for possession in the backcourt. Notae dove for the ball and saved it to Au'Diese Toney, who was fouled and hit the go-ahead free throws.

For the two-game tournament, Notae scored 24 points on 8 of 34 shot attempts and was 4 of 17 from three-point range. He also had 8 rebounds, 6 assists and 5 steals.

After the game, Musselman tweeted a video from earlier in the day that showed ESPN basketball analyst Fran Fraschilla picking Cincinnati to win.

“I think it’s going to be a close game, I do,” Fraschilla said, “but because Arkansas with those transfers is still trying to figure everything out, and what (Cincinnati coach) Wes Miller has done with kids like (Jeremiah) Davenport, Mike Saunders was tremendous last night; he’s an electric player you want to watch him tonight — close game, but if you make me pick, I’m going to with the Big 12 team, OK? Because we’re going to see Cincinnati — I know they’re in the American (Athletic) Conference right now — but eventually they’re going to be in the Big 12, and I can’t wait to see them in the Big 12.”

Within minutes of the game, Musselman tweeted, “Thanks for the pre-game motivation @franfraschilla.”

Arkansas forward Jaylin Williams took four charges and did not commit a foul against Cincinnati.

Williams’ final charge came with eight seconds remaining when Mike Saunders Jr. knocked him over while trying to kick out after a dribble drive. The Bearcats trailed 70-67 at the time.

Williams has drawn 9 charges this season — 1 in the season opener against Mercer, 3 in the second game of the season against Gardner-Webb, 1 on Monday against Kansas State and the 4 against Cincinnati.

Cincinnati junior guard Jeremiah Davenport was held scoreless in 22 minutes against the Razorbacks. Davenport missed all four of his field goal attempts and also missed twice at the free-throw line.

Coming into Tuesday’s game, Davenport was averaging a team-high 13.8 points and had scored in double figures in six consecutive games dating to last season. Davenport scored 19 points during the Bearcats’ win over Illinois on Monday.

There were 14 lead changes and 11 ties during Tuesday’s game, including 10 lead changes over an 11-minute, 17-second span in the final 13 minutes of the second half.

Arkansas took the lead for good on two Toney free throws with 1:36 remaining, the start of a 7-0 run to end the game.

Over the final 1:39, Arkansas out-rebounded Cincinnati 6-0 and forced the Bearcats into two turnovers.

Arkansas improved to 9-6 in games played in Kansas City.

The Razorbacks have won four straight games there dating to the 1994-95 season, when they beat Memphis and Virginia during the NCAA Tournament to advance to the Final Four.

This week’s games were Arkansas’ first played at T-Mobile Center, which opened in 2007.

The Razorbacks do not have any future games scheduled in Kansas City, but could play there again next season when T-Mobile Center will host the NCAA Midwest Regional.

Three-point shooting was a struggle for most of the Hall of Fame Classic, with the four teams combining to shoot 44 of 177 (24.9%) from distance.

Arkansas combined to make 6 of 39 shots from beyond the arc during its two games.

In an odd statistical quirk, three teams — Arkansas, Kansas State and Illinois — were 3 of 22 from three-point range during Monday’s games.

Cincinnati was the best three-point shooting team during the tournament. The Bearcats made 14 of 45 attempts, including 8 of 24 against the Razorbacks.

Each team had a famous former athlete sitting courtside Tuesday.

Former Arkansas All-America pitcher Isaiah Campbell was in attendance for the second night in a row. Campbell, who grew up near Kansas City in Olathe, Kan., was a second-round pick of the Seattle Mariners in 2019 and finished this season with the club’s High-A affiliate in Everett, Wash.

Arkansas won an early-season tournament title for the first time since it beat Southern Illinois, Marist and West Virginia during the 2006-07 Old Spice Classic at Walt Disney World in Orlando, Fla.

The Razorbacks also won titles at the Rainbow Classic in Honolulu in 1994-95 and the 2004-05 Paradise Jam in St. Thomas in the U.S. Virgin Islands.

The Razorbacks and Bearcats are scheduled to be part of an eight-team field at the Maui Invitational next season, along with Arizona, Creighton, Louisville, Ohio State, San Diego State and Texas Tech.

It is unclear whether the invitational will be played on Maui next year for the first time since 2019. The last two Maui Invitationals — including games this week in Las Vegas — have been held on the U.S. mainland due to covid-19 concerns in Hawaii.

Arkansas returns home for a game against Pennsylvania on Sunday at 3 p.m. on SEC Network.

The Quakers are 3-5 this season with wins over Bucknell, Lafayette and Old Dominion, and losses to Florida State, George Mason, Utah State, Davidson and Towson.