Toney 'like a nightmare' in Hall of Fame Classic title game 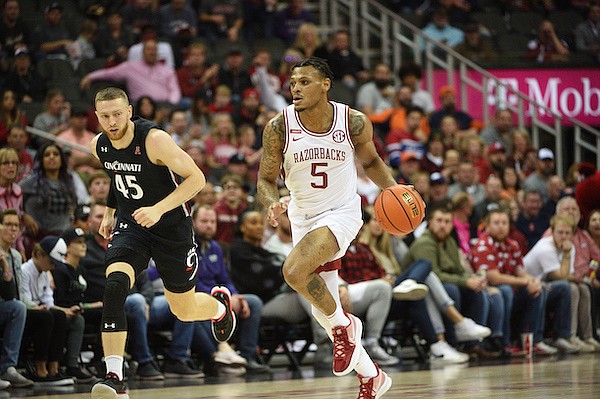 Arkansas' Au'Diese Toney drives the ball during a game against Cincinnati on Tuesday, Nov. 23, 2021, in Kansas City, Mo.

KANSAS CITY, Mo. — In Arkansas coach Eric Musselman’s opinion, the correct player was named most valuable player of the Hall of Fame Classic on Tuesday.

Every fan that filed into T-Mobile Center for the championship game of the two-day event knew, too, that Arkansas wing Au’Diese Toney would be taking top individual honors back to Fayetteville after an impressive stretch against Kansas State and Cincinnati.

In Arkansas’ 73-67 victory over the Bearcats, he stood out above the rest.

Toney finished with a team-high 19 points on 6 of 9 from the floor and 7 of 8 at the free-throw line. He, as well as forward Jaylin Williams, spearheaded a dominant effort from the Razorbacks on the glass.

Toney grabbed nine rebounds, including six on the offensive end.

“(I was) just competing,” Toney said. “That's the main thing I love to do. I love this game. I love this sport. Ever since I was little, I've just had that grit to compete day in and day out. Just staying humble in it every day.

“Play your heart out. You never know when your last day is on Earth, so you always have to play and compete."

Toney was deserving of MVP honors not only for his efficient scoring efforts in both of Arkansas’ wins and relentless pursuit of missed shots, but for his defense in the title game.

Musselman tasked the 6-6 transfer from Pittsburgh with defending hot-scoring guard Jeremiah Davenport, who with 19 points on Monday was one of Cincinnati’s top offensive weapons in the Bearcats’ 71-51 victory over No. 14 Illinois. Davenport had scored at least 11 points in each of the first five games of the season and came in shooting better than 40% from three-point range.

He missed all four of his field goal attempts, did not score and turned the ball over twice in 22 minutes against Arkansas. Largely due to Toney’s stout defensive play, Davenport for the first time since Feb. 23, 2020, did not score while seeing playing time.

“(Toney) literally took their best player completely and utterly out of the game,” Musselman said. “(Davenport) was a minus-15 when he was in and Au’Diese was assigned to him. He stuck to him, he never left him. He defended his three ball, which we thought was really important.

“We felt like after watching their game against Georgia — we watched three full games — he was a big key.”

Tuesday marked the third time in five games that Toney corralled at least five Razorbacks misses. His activity on the glass keyed an 18-offensive-rebound night for Arkansas and a 14-4 edge in second-chance points.

“Au’Diese Toney is a like a nightmare on the offensive boards,” Cincinnati coach Wes Miller said. “You look down and he had six offensive rebounds. He was just extremely impressive.”

Toney made his greatest impact Tuesday after Arkansas went into the halftime locker room down 30-26. He scored 13 of his 19 points and grabbed 8 of his 9 rebounds in the second half.

Shortly after Arkansas accepted the Hall of Fame Classic championship trophy and celebrated as a team near midcourt, Toney reappeared on the floor and was ushered to the Arkansas radio broadcast table by a team official. He was met with an ovation for his grit, toughness and overall play by Razorbacks fans who remained in the arena.

And, of course, there were MVP chants thrown in his direction as well.

“He keeps getting better,” Musselman said. “I think our style of play is much, much different than what he’s used to playing. I think he was a little bit uncomfortable at the beginning with how we play and how free we play.

“I think he’s really, really finding a great groove now in what we want him to do and the freedom that he can play with.”