Arkansas vs. Missouri: How to watch and listen, forecast, betting line, team comparisons 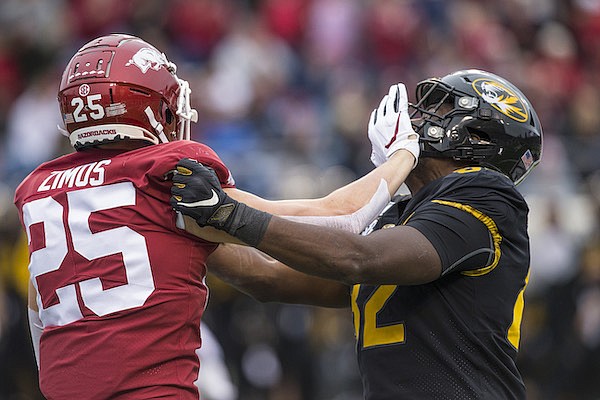 RADIO Razorback Sports Network can be accessed through local FM and AM affiliates, via the Arkansas Razorbacks Gameday app, via the TuneIn app or on ArkansasRazorbacks.com. Blackouts may apply. The Arkansas radio broadcast will be carried on XM Ch. 84.

TELEVISION The game will be televised on CBS and can be streamed through Paramount-Plus (subscription login required).

WEATHER According to the National Weather Service, Friday will be sunny with a high near 53 degrees in Fayetteville.

BETTING LINE Arkansas is a 14 1/2-point favorite, according to Vegas Insider.

NOTABLE Missouri has won five consecutive games in the series against Arkansas. The Tigers are 6-1 against the Razorbacks since joining the SEC....Arkansas is looking to go 3-0 in rivalry trophy games this season. The Razorbacks defeated Texas A&M 20-10 on Sept. 25 and defeated LSU 16-13 in overtime on Nov. 13. Arkansas has not won the Battle Line Trophy since 2015....The Razorbacks blew a 14-point lead during the fourth quarter of last season's loss at Missouri. The Tigers won when Harrison Mevis kicked a 32-yard field goal as time expired....Missouri running back Tyler Badie ranks fourth nationally with an average of 125.9 rushing yards per game. Badie has rushed for 200 yards four times this season. He is also one of the Tigers' leading receivers with 53 catches for 335 yards. Badie has scored 17 touchdowns this season — 13 rushing and 4 receiving....Arkansas coach Sam Pittman was an assistant coach at Missouri in 2000....Arkansas defensive coordinator Barry Odom was Missouri's head coach from 2016-19 and had a 25-25 record. Odom also played for the Tigers....Arkansas linebackers coach Michael Scherer played at Missouri from 2012-16 and was a defensive graduate assistant there in 2019....Arkansas cornerbacks coach Sam Carter was an assistant in various roles at Missouri for four seasons before coming to Arkansas in 2020....Missouri coach Eli Drinkwitz grew up in Alma, about 40 miles south of Fayetteville....Missouri defensive line coach Alfred Davis lettered for the Razorbacks from 2009-12 and was a graduate assistant at Arkansas from 2014-16....Missouri special assistant Rick Jones is a former eight-time state champion coach in Arkansas at Greenwood High School. Jones coached Arkansas linebacker Grant Morgan at Greenwood.