Razorbacks have ties in FCS playoffs 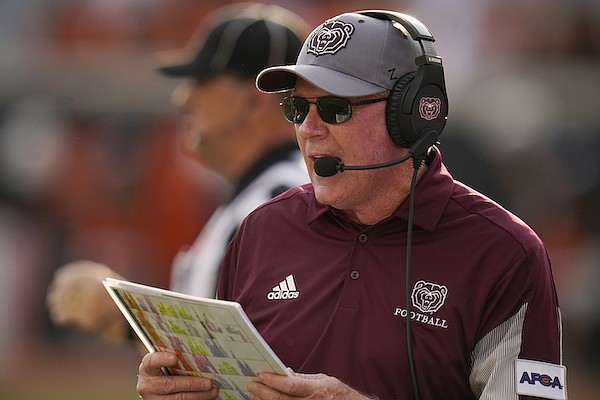 Two games in the NCAA FCS Playoffs this weekend will include Arkansas ties.

Missouri State is coached by former Razorbacks coach Bobby Petrino and will host Tennessee-Martin on Saturday at 3 p.m. The game will be streamed on ESPN-Plus.

The Bears (8-3) have made the playoffs in both of their seasons under Petrino. They won the Missouri Valley Conference during the 2020 season and finished second in the conference to national powerhouse North Dakota State this season.

The Bears are scheduled to play a game against the Razorbacks in Fayetteville on Sept. 17, 2022.

Former Arkansas quarterback Cole Kelley will lead Southeastern Louisiana in a first-round home game against Florida A&M on Saturday at 6 p.m. on ESPN-Plus.

Kelley is the reigning Walter Payton Award winner as the national player of the year in FCS and was named Southland Conference player of the year this season for the Lions (8-3). Kelley has passed for 4,382 yards and 38 touchdowns, and rushed for 442 yards and 16 touchdowns this season, and leads the FCS in passing yards, total offense points responsible for and completion percentage.

Since transferring from Arkansas following the 2018 season, Kelley has accounted for 8,561 yards of total offense and 101 touchdowns.

Jacob Switzer, who went through spring drills at Arkansas this year, is a backup quarterback at Southeastern Louisiana. Switzer is the grandson of College Football Hall of Famer Barry Switzer, a former Razorback player and assistant coach.

CORRECTION An earlier indicated the wrong date for the Missouri State game at Arkansas in 2022. It has been corrected.