College Cup trip on the line for Razorbacks at Rutgers 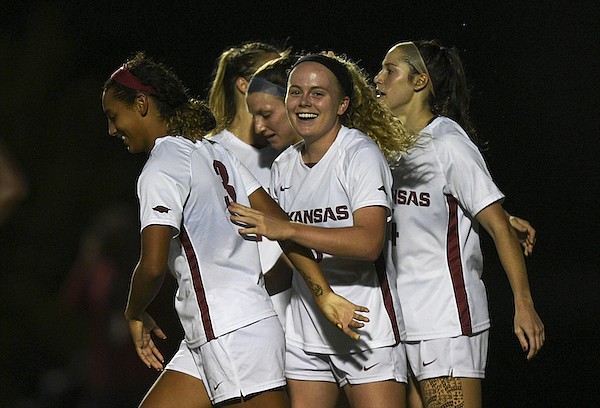 Arkansas' Reagan Swindall (facing) celebrates with teammates during a game against Mississippi State on Sunday, Oct. 24, 2021, in Fayetteville.

University of Arkansas junior Reagan Swindall said there’s nothing like playing in front of a packed stadium.

But she and the rest of the Razorbacks women’s soccer team won’t have the backing of their fans in Fayetteville when it takes the field tonight for an Elite Eight matchup at No. 5 Rutgers.

Instead, there could be close to 5,000 people in the stands for the Razorbacks’ first trip to the Elite Eight in program history at Yurcak Field in Piscataway, N.J. Fans in Arkansas will be able to see the match because it will be streamed by the Big Ten Network for free.

“We’re undefeated in how many trips to (Texas) A&M?” Hale said. “We’re pretty good on the road. It’s the dead environments that get us sometimes. Rutgers is gonna have 5,000 people there. ….that stuff gets us. It’s when we go to BYU in a stadium that seats 5,000 and there’s 23 fans there.

“That’s where sometimes we have to create our own energy. Listen, this is going to be awesome. We’re pumped for that opportunity.”

Arkansas (19-4), a No. 2 seed in the tournament and ranked seventh in the country, defeated Notre Dame 3-2 in the Sweet 16 last Sunday at Razorback Field, buoyed by two goals and an assist from senior Taylor Malham.

Swindall said the team’s experience paid dividends against the Fighting Irish, who fought back after Arkansas scored to take leads of 1-0 and 2-1.

“I think because we had so many older people on the field, I think they knew we were perfectly capable of coming back,” Swindall said. “We’ve done it before and they were not gonna let us lose. I think they wanted to win so bad.

“I think that’s why you saw Taylor Malham finishing that goal because she’s an older player and she knew she was not going to let us lose that game.”

Hale didn’t disagree, but quickly pointed out Swindall, despite being a junior, has plenty of experience, too. And even though she may often defer to a talented group of seniors, she’s a big reason for the Razorbacks’ success.

“How many games have you played Swin?" Hale asked. “Like 50, 60? Talking about older players, she’d be the senior-most player on some teams. Swindall embodies everything we are from a person off the field to a person on the field.”

Even though goal scorers often grab the headlines, Swindall is part of a group of elite defenders who have been a key ingredient in the best season in Arkansas soccer history.

The Razorbacks claimed the Southeastern Conference regular-season title and the 19 wins are already a program record.

“We don’t go to an Elite Eight without Swindall,” Hale said. “There’s no chance. The back line, it’s a bit of a thankless job but they understand that....Coaches get what it really is and how important it is and I think the people who watch us do, too.”

The center-back from Rockwall, Texas, has played in 59 matches in three seasons for the Razorbacks and logged 33 starts in her last 36 matches. She also has 8 goals in her career, including 2 goals and 3 assists this season.

Swindall is especially effective on corner kicks just because of tenacity, Hale said.

“I mean she can’t be 5-foot-4 and she’s maybe the most dominant header on corner kicks in the country,” Hale said. “There’s some athleticism and timing but a lot of that’s just want to.”

The Razorback face a Rutgers team ranked fifth in the country. Rutgers went undefeated in winning the Big Ten regular-season title, but lost 1-0 to Michigan in the finals of the conference tournament. The Scarlet Knights (19-3-1), who are a No. 1 seed in the tournament, got past TCU on penalty kicks 1-1 (5-4) to advance to the Elite Eight.

Hale understands the Razorbacks will be facing another outstanding opponent, but he’s also confident in his group.

“They call it Jersey grit,” Hale said. “We know they’re gonna be tough, undefeated in the Big Ten. They got some really special attacking players....But we’ve played lots of really special players. It won’t be something we’ve never seen before. It’s the advantage of playing the schedule we play.”

Not to mention, Rutgers will have to deal with the ultra-aggressive style of the Razorbacks. And that’s something the Scarlet Knights haven’t seen, Hale said.

“They have not played it. They have not seen it live,” Hale said. “My guess is he’s calling people to ask their take. But then again, it’s gonna be awesome...this is something these players have worked really hard to earn the opportunity for and we’re gonna see it just as that.”

Swindall had an idea her experience in Fayetteville was going to be special early on in her college career.

“I remember my first week here, I called my mom and I was like four years is not gonna be long enough,” Swindall said. “I love this so much.”

The pandemic is a bit of a blessing in disguise, giving her an additional year of eligibility which she said she will take.

But before any of that, Swindall and the Razorbacks are squarely focused on tonight with an opportunity to make more history and advance to the College Cup.