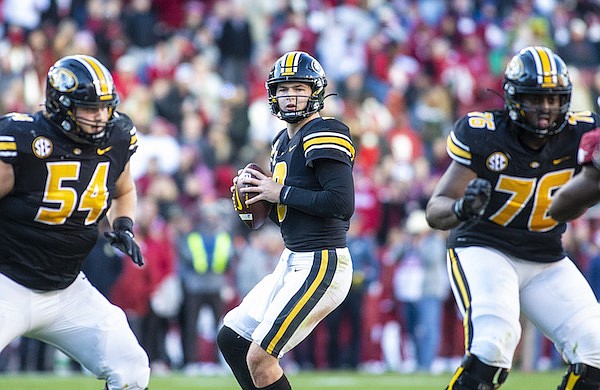 Missouri quarterback Connor Bazelak in the pocket on Friday, Nov. 26 2021, during the first half of play at Reynolds Razorback Stadium, Fayetteville.

In his first Battle Line Rivalry game last season, Missouri coach and Arkansas native Eli Drinkwitz got to celebrate after kicker Harrison Mevis gifted him a 50-48 win over the Razorbacks as time expired.

Razorbacks quarterback KJ Jefferson was 15 of 19 passing for 262 yards, and that included a 52-yard touchdown pass to Treylon Burks (7 catches, 129 yards) in the third quarter as Arkansas rolled to 34-17 win and ended a five-game losing streak to the Tigers.

Drinkwitz was understandably dejected in his postgame Zoom press conference.

He was asked if the game was more about his team’s mistakes, especially some costly penalties.

“Yeah, I think you're 100% right,” Drinkwitz said. “I mean, just self-inflicted wounds. We kept getting in our own way. We'd have big gains and have holding penalties. We got a chop block. We got an illegal cut.

“I mean, even right before half there we have an explosive play get called back on a holding penalty, so, you know, a lot of things that we're going to have to work hard to correct.”

Arkansas led 10-6 at halftime, but scored a pair of third-quarter touchdowns to go up 24-6. The Razorbacks eventually pushed that advantage to 34-9 early in the fourth quarter.

“We're down a few guys just because of injuries and sickness," Drinkwitz said. "We were trying to play a little bit tighter game and once it got to two scores, it kind of got away from us there.”

Despite workhorse tailback Tyler Badie rushing 41 times for 219 yards, the Missouri offense had just 65 yards passing and failed to score a touchdown until 1:25 remaining in the game.

"He's a great competitor," Drinkwitz said of Badie. "He gives us everything he's got and for him to get that record, that's a special thing. I know he'll be disappointed in the result today, but I know he gave us everything he had."

Tigers quarterback Connor Bazelak was just 10 of 25 passing and was long on a deep throw on what should have been a touchdown on Missouri’s first drive of the game.

“I'll have to go back and watch the tape,” Drinkwitz said of Bazelak’s inaccuracy. “I mean, first drive we miss a third-and-short, we miss a wide open, right down the middle (pass)...that we felt like we had pretty good.

"Just kind of after that (we) weren't able to really get into a rhythm and consistently complete footballs down the field. They were playing press man and you know it, just weren't connecting there.”

That was not a problem for Jefferson, who was also his team’s leading rusher with 6 carries for 58 yards, including a 49-yarder that set up the first score of the game.

“I mean, I think KJ did a nice job,” Drinkwitz said. “He was very accurate, you know, created a great explosive play with the deep ball to Burks and then scrambled on a third down.

“He got an explosive play using his feet. He's a big-time quarterback and he did what he needed to do for his football team tonight.”

Missouri linebacker Blaze Alldredge, who led his team with 11 tackles and forced a fumble, echoed those sentiments.

“He did what he does,” Alldredge said. “He's a big quarterback that can run the ball and he's also got a big arm to throw it over the top. You saw him with a couple big runs.

“You know he's going to do that. You've got to try and limit it as much as you can, but like our coaches say, these guys are on scholarship, too, you know," he added. "They're going to make some plays now and then, especially a player of his caliber, so he did a great job doing what he's known for.

“He had some good quarterback runs and when he needed to he was able to take the top off with some strong throws."