Pool made sure Hogs turned up fire in second half 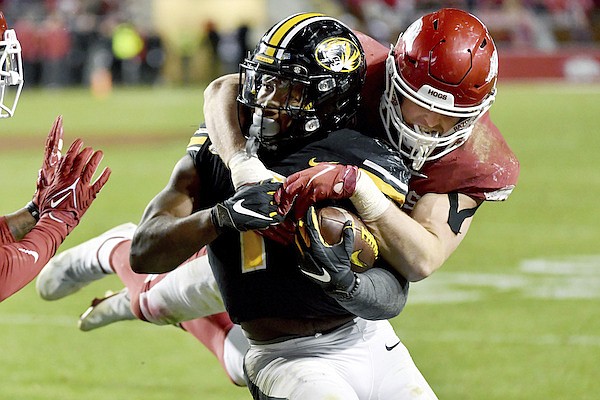 FAYETTEVILLE – Bumper Pool may play a fifth year for Arkansas, but just before the second half began against Missouri the senior linebacker wanted to inspire his teammates to give it everything for his two running buddies.

“There was a lot of fire inside me that I wanted to get out,” Pool said of what he told of the full team gathered around him at the 20-yard line.

“I knew that it was going to be the last time for Grant (Morgan) and Hayden (Henry) to be on this field. We needed to beat Missouri and put an end to (the losing streak).”

With KJ Jefferson solving Missouri’s pressure defense with big plays of 55, 52, 49, 39 and 32 yards in the 34-17 victory, the Arkansas defense – and those three wonderful linebackers – did not allow a touchdown until just 1:25 remained.

The No. 25 Razorbacks snapped a five-game losing streak to the Tigers to win their third rivalry game trophy of the season. It gave them an improbable 8-4 regular season in Sam Pittman’s second season as coach in a fun 5-1 run at Reynolds Razorback Stadium that also included a romp of Texas.

Pool hails from Texas, but most of his family went to Arkansas. A 4-star recruited by many Power 5 schools, Pool was probably destined to be a Razorback.

Although not a starter except for the season opener when Henry was suspended for the first half (for targeting against Alabama in the 2020 finale), Pool led the Hogs in tackles against Missouri (13) and for the regular season (with 120).

Those three kept slamming Missouri running back Tyler Badie, the SEC’s best, on play after play, most of them sweeps to avoid the three-man front occupying a good offensive line.

Badie made 219 yards on 42 runs, but his long play of the game was for 17 yards. It was not enough with the way the linebackers chased Missouri quarterback Connor Bazelak with blitzes in passing situations. Badie’s 5-yard touchdown run in the final two minutes was the lone whimper for the Tigers.

Missouri shut down the Arkansas running game with a series of weakside blitzes, the area offensive coordinator Kendal Briles generally attacks. Jefferson did solve it at times. His 49-yard dash set up a Cam Little field goal of 36 yards in the first quarter.

It was a Jefferson pass to Treylon Burks for 43 yards that set up a 1-yard scoring run by Raheim “Rocket” Sanders to give the Hogs the lead for good at 5:53 of the second quarter.

The Hogs led by just 10-6 at halftime. They responded to a Pittman locker room talk during the break and Pool’s message on the field.

“I was mad,” Pittman said. “I didn’t like we the way we played (in the first half). We didn’t play with a lot of energy.”

Of Pool’s talk, Pittman said, “He’s fiery. All three of those linebackers are like that. Bumper knows he’s a leader. Absolutely, he has (done that before).”

There was talk after the game of Pool playing another year, the covid-19 rule that keeps on giving. Morgan and Henry were granted an extra year this season. Pool can get a fifth year for 2022. Pittman said he’s already working on Pool.

Pool wouldn’t confirm he’ll come back in 2022, but he said Morgan and Henry gave a lot to the team by returning this season. He left the door open.

“Absolutely,” Pool said when asked if it’s under consideration. “It will all take care of itself. Hayden and Grant came back.”

Pool and Henry were the two defensive players brought to the interview room. Both lauded the work of defensive coordinator Barry Odom, the former Missouri head coach and player.

“We are happy for Coach Odom,” Henry said. “He’s a stone cold killer. He is the tip of our spear. He’s a legend.”

Pool said, “He prepares us harder than anyone. He wanted this one. What he means to the University of Arkansas can never be taken for granted. He turned this defense around.”

Odom's plan took advantage of a Missouri offense void of top end talent at wide receiver and average passing. The Tigers made only 65 yards through the air. On passing downs, he lined all 11 defenders near the line of scrimmage with the middle of the field void of safeties. There was never anything dangerous from the MU quarterback.

The Hogs punished the blitz package after halftime and they did show off some talented wide receivers. One of them was true freshman Ketron Jackson.

Burks probably played his last game at home. The true junior from Warren caught seven passes for 129 yards. He scored one touchdown and also executed a perfectly timed option pitch to Sanders for a 7-yard touchdown run for a 34-9 lead at 9:52 of the fourth quarter.

Jefferson was just as remarkable. Briles should get lots of credit for the way he’s tutored UA quarterbacks in his two years in Fayetteville. Jefferson completed 15 of 19 for 262 yards. That gives him 2,578 yards on the season with 21 scores against just 3 interceptions.

Ah, yes, a bowl game. The Hogs have played their way into a possible trip to a Florida bowl, although the only bowl reps in attendance Friday were from the Liberty Bowl.

Jefferson shook off back spasms that hit early in the second half. After a brief stint in the injury tent, the redshirt sophomore torched the Missouri scheme that had stuffed the run in the first half.

Burks did with deft touch on deep passes, sometimes moving to his left in awkward escapes of pressure.

“If you look at that scheme, you have to break them of it or you are going to get those first-half results,” Pittman said. “In the first half, he got sacked on hot protections.”

Pittman said the halftime message, “You have to go attack that. We are a running team, but if someone is going to take that away, you have to make them pay. We were chasing spots and when we cut the ball up, we couldn’t block the (weakside) linebacker.”

But the Hogs figured it out, as they have most of the time this season. Pittman beamed when questioned about the 8-4 record, along with 4-4 in SEC play. They’ve won seven SEC games in his two seasons.

“I’m not sure the world knows we are 8-4, but 8-4 is different at Arkansas,” Pittman said. “We have not been relevant in awhile.”

It’s not like the surge Houston Nutt led in 1998 in his first year as head coach, a 9-3 season and a share of the SEC West crown. The Hogs had shared the West three years previous.

No, this came after back-to-back 2-10 seasons under Chad Morris just before Pittman arrived from Georgia.

“We won eight against this schedule (rated as the nation’s most difficult), and beat our rivals in three trophy games,” he said. “Our kids bought in and our coaching staff did a great job.

And, it left everyone in a mood to celebrate, starting with Odom’s birthday on Friday and then Pittman’s on Sunday. They’ll have to wait another week to find out where they are going for a bowl celebration.

It will be well deserved no matter the destination.