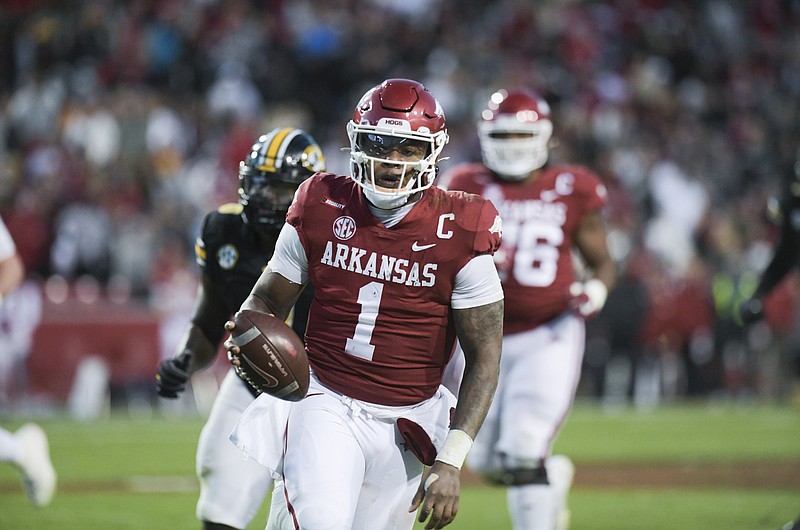 Arkansas quarterback KJ Jefferson carries the ball during a game against Missouri on Friday, Nov. 26, 2021, in Fayetteville.

FAYETTEVILLE — After a so-so first half for the Arkansas Razorbacks’ offense, quarterback KJ Jefferson came out firing in the third quarter against Missouri on Friday.

Jefferson passed for 148 yards in the third quarter alone to break open a close game and help the No. 25 Razorbacks beat the Tigers 34-17 to close the regular season.

The University of Arkansas led 10-6 at halftime and extended that to 27-9 with 11:44 left in the fourth quarter primarily on the strength of its passing game.

With Missouri’s defense loading the box to slow down an Arkansas offense that came into the game averaging 222.3 rushing yards to rank second in the SEC and 14th nationally, the Razorbacks altered their game plan in the second half.

“I think when you’re looking at a defensive scheme like that, you’ve got to break it,” Arkansas Coach Sam Pittman said. “If you don’t, you’re going to have more first-half results.”

The Razorbacks had a three-and-out on their first series of the third quarter, then Jefferson and his receivers went to work.

On Arkansas’ second series of the quarter, Jefferson hit De’Vion Warren on a tunnel screen for a 55-yard gain to set up Trelon Smith’s touchdown run.

On the next series, Jefferson and Treylon Burks connected on a 52-yard touchdown pass.

Then, Jefferson had a 39-yard pass to Ketron Jackson that led to a Cam Little field goal.

“The first half, we didn’t get the start we wanted to,” Jefferson said. “We hit a couple big plays, but we didn’t finish in the end zone.

“Then coming out the second half, we knew what they were giving us, so we just wanted to be aggressive in the passing game.”

Jefferson, a redshirt sophomore in his first season as the full-time starter, completed 15 of 19 passes for 262 yards. He also led the Razorbacks in rushing with six carries for 58 yards despite being sacked three times for 15 yards in losses. His 49-yard run on Arkansas’ first series of the game set up a field goal by Little.

“He did what he does,” Missouri linebacker Blaze Alldredge said of Jefferson. “He’s a big quarterback that can run the ball, and he’s also got a big arm to throw it over the top.

“In terms of their big plays, I think they do a really good job of putting the defense in hard spots.”

Burks had 7 receptions for 129 yards, including 2 for 53 in the third quarter.

“I felt like we adjusted, and we came out and played fast, like we’re supposed to do,” Burks said. “We made big plays down the field and made big plays for [Jefferson] and the team and got a big win.”

Jefferson went into the injury tent on the Arkansas sideline during the first half, and when the offense wasn’t on the field, he rode a stationary bike to keep loose.

“I think he’s tough,” Pittman said. “I think he didn’t want to let his team down if he could at all get back out there and play.

“And he certainly did. Leaders usually do that kind of stuff. They do a little bit more than others.”

Jefferson said after he took a hit, his back tightened up on him. He also has played through knee injuries, notably in Arkansas’ 20-10 victory over Texas A&M.

“He’s tough as nails,” Arkansas linebacker Hayden Henry said. “When he runs the way that he does, he’s going to get beat up.

“He likes to run people over, and I love that about him actually. it gets me fired up. He’s an ultra competitor, loves to win.”

Jefferson said Burks challenged him to play through the pain he was feeling in his back.

“He came up to me saying, ‘We need you.This is where you need to show your leadership here. Put the team on your back and carry us to victory,’ ” Jefferson said. “For him to be in my ear like that, I just knew I had to go out here and make the state proud.”