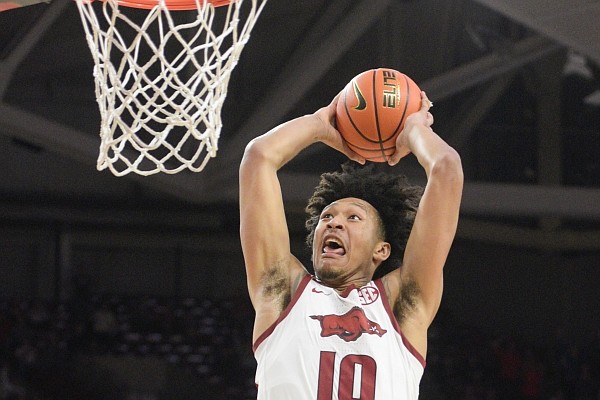 Jaylin Williams dunks the ball after JD Notae forced a turnover on Wednesday, Nov. 17, 2021, during the second half of a 93-80 win over Northern Iowa inside Bud Walton Arena in Fayetteville.

FAYETTEVILLE — Call it fitting an added blue collar to a white-collar player.

Or fitting an added white collar to a blue-collar player.

Whatever you call it, it seems Fort Smith Northside Coach Eric Burnett recently collared the market for best double pre-fitting Razorbacks before their basketball arrival to the University of Arkansas campus in Fayetteville.

Defensively the white-collar shooter wore the bluest of blue collars. He did the down and dirty work, especially sacrificing his body taking more charges than American Express.

Joe donned collars so well he stayed a Razorback but two years. He’s into his second NBA season with the Philadelphia 76ers.

He wears a white collar, too. For a rookie big man, Williams last season proved a credible ball-handling/passer 21 assists vs. 24 turnovers in 400 minutes of 26 games.

For these 5-0 Hogs, Williams four times led or seconded in assists.

He leads Arkansas in assists, rebounding and shot-blocking, and is second in steals becoming as valuable a 5.8 scorer as you’ll find.

A modest five is what he scored against Cincinnati in the championship game of the Hall of Fame Classic in Kansas City but led three categories and tied for steals.

A winner, the Hogs couldn’t have won without asserts Arkansas forward Au’Diese Toney even as Toney was the well deserved Hall of Fame Classic MVP.

“J-Will has the heart of a lion,” Toney said. “He doesn’t think about himself. He thinks about what he has to do for the team and what the team needs at the moment. He does everything. The little things that people don’t notice. J-Will is a big piece of the group.”