Razorbacks fall to Rutgers on PKs in Elite Eight 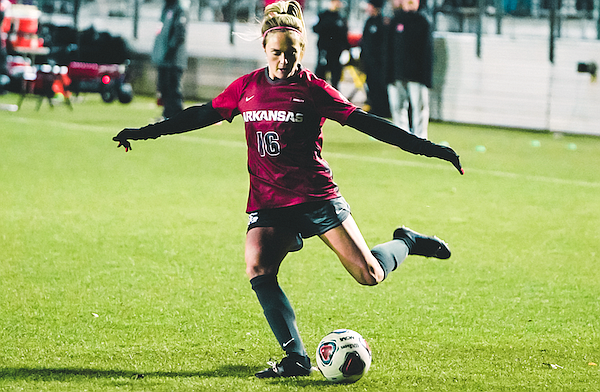 Arkansas' Anna Podojil kicks the ball during an NCAA Tournament game against Rutgers on Friday, Nov. 26, 2021, in Piscataway, N.J.

The best season in University of Arkansas women’s soccer history came to an end on penalty kicks on a chilly Friday evening in Piscataway, N.J.

Riley Tiernan beat Arkansas keeper Hannah Warner to her right that triggered the Scarlet Knights’ celebration as they advanced 2-2 (4-2 PKs) to the NCAA Tournament semifinals.

The Razorbacks (19-5) struggled in penalty kicks as Rutgers keeper Meagan McClelland stopped Anna Podojil’s shot and Haley VanFossen hit the post. Kaelee Van Gundy, who didn’t play during the match, got Arkansas on the board in PKs, but McClelland gave the Scarlet Knights (20-3-1) a 3-1 advantage with her kick.

Parker Goins then beat McClelland to get Arkansas back within 3-2, but Tiernan, who scored Rutgers’ first goal two minutes into the match, sealed the deal.

That closes the book on a Razorbacks’ season that included a single-season record for wins and a Southeastern Conference regular-season title. It was also Arkansas’ first Elite Eight appearance in school history, after two previous losses in the Sweet 16.

It was the Razorbacks’ first time to get to penalty kicks since losing to LSU in the SEC Tournament finals in 2018. By contrast, Rutgers advanced in PKs in its Sweet 16 matchup against TCU last week. It will be the second ever College Cup appearance for the Scarlet Knights. The Big Ten regular-season champions will take on top-ranked Florida State on Friday in the College Cup in Santa Clara, Calif.

Goins had Arkansas’ best scoring chance in overtime, but her shot was just wide a minute into the first extra period. Warner came up with a huge save of a Tiernan shot late in the first overtime and then stopped another Rutgers shot in the 107th minute to force it to PKs.

Rutgers outshot Arkansas 30-26 and enjoyed an 11-9 advantage on frame. Warner finished with a match-high nine saves.

There was no scoring in the second half and the two overtime periods, after an action-packed first 45 minutes that included 23 shots between the two teams.

Rutgers ended up outshooting Arkansas 12-11 in a first half that ended up tied 2-2. The Scarlet Knights opened the scoring just two minutes in, going far post just off Warner’s hands.

But the Razorbacks fired back as Podojil tied it in the eighth minute, chipping the ball high at an angle over the Rutgers keeper.

Arkansas grabbed the lead in the 15th minute off a corner kick as Reagan Swindall connected with the header for the 2-1 lead. Goins added to her total as the school’s all-time assist leader on the play.

But the Scarlet Knights tied it as Amirah Ali took a feed from Tiernan and fired a shot past Warner in the 43rd minute. Ali had hit the cross bar with a shot just a couple minutes earlier. But neither team would score again in regulation.