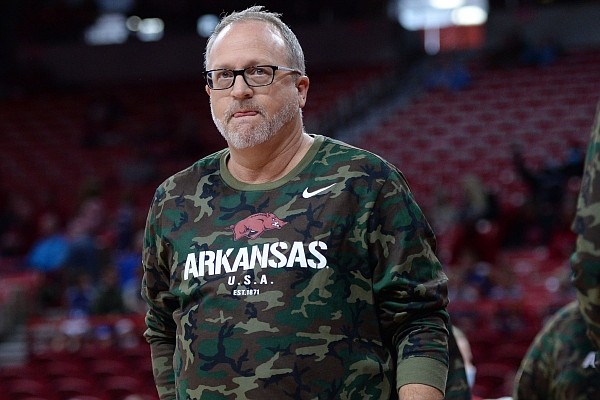 Razorbacks coach Mike Neighbors is shown prior to Arkansas' game against UAPB on Friday, Nov. 12, 2021, in Bud Walton Arena in Fayetteville.

The Razorbacks have focused this week on more live game-like situations in practice in preparation for games on back-to-back days this weekend beginning with Sam Houston State this afternoon in Walton Arena.

Tip-off for is set for 2 p.m.The Razorbacks (4-1) will follow that up by facing Belmont at 7 p.m. Sunday evening. Both games will be available on SEC Network-Plus.

Arkansas is shooting just 28.5% from beyond the three-point arc for the season and made only 4-of-20 (20%) in the 65-58 win over SMU earlier this week. Neighbors’ offensive philosophy focuses on layups, three-point shots and free throws and the Razorbacks had problems in all three areas the last few games.

“We’re continuing to miss shots that I think we can make,” Neighbors said. “… We haven’t been going live as much in practice the last few weeks against pressure to make a shot. You’re doing it without defense because I was more concerned with our conditioning and things like that. And we got a little bit too far away from some of the competition.

“We’re not shooting over 30% from the three-point line and that just does not equate with me right now. We’ve got too much slippage from practice to game. So we either need to start taking better shots or we need to change the distribution a little bit because we’re not gonna survive in the league shooting under 30%.”

The other issue was a putrid 11-of-27 performance from the free-throw line, but he took a different approach on that.

“I went the other way on that,” Neighbors said. “I think the more you emphasize it, the worse it gets. We took the pressure off. … They’re all good shooters. It was painful for all of us.”

He acknowledged the missed free throws against SMU helped the Mustangs stay close late. But he doesn’t want his players to become less aggressive thinking about the struggles at the foul line.

“Sometimes when you’re struggling from the foul line, you know what they’ll do? They’ll stop trying to get fouled,” Neighbors said. “I definitely don’t want that to be the result of this. So we tried to de-emphasize it a little bit.”

Neighbors also said there will likely be less fluctuation in the starting lineup going forward. He’s used slightly different lineups in each game thus far. But the quartet of Makayla Daniels, Amber Ramirez, Erynn Barnum and Sasha Goforth have all been constants.

“Starting this weekend, I think you’ll see some things shake out and settle it,” Neighbors said.

Neighbors has talked about the team’s overall depth being a strength and it’s played out thus far.