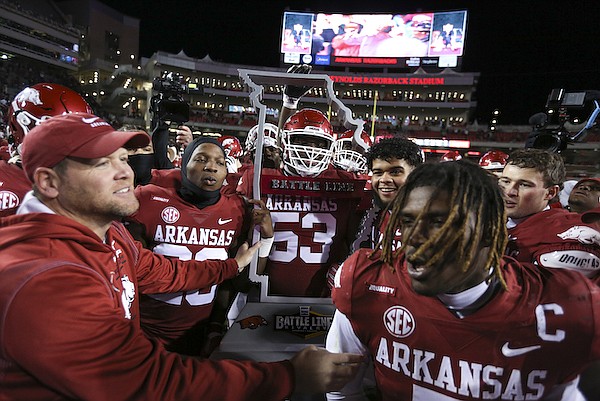 FAYETTEVILLE — The renaissance of University of Arkansas football reached a historic level on Friday as the Razorbacks got some long-awaited payback in the Battle Line Rivalry while celebrating defensive coordinator Barry Odom’s birthday.

Arkansas used a series of razzle-dazzle big plays in the third quarter to pull away from Missouri for a 34-17 win before a crowd of 67,320 at Reynolds Razorback Stadium.

After Trelon Smith’s 14-yard carry ran out the clock, the Razorbacks raced into the northeast corner of the stadium to seize the trophy with the cardinal red “Battle Line” slotted into the middle.

Arkansas (8-4, 4-4 SEC) snapped a five-game losing streak in the series and made history by winning all three of its trophy games against Texas A&M, LSU and Missouri for the first time since Missouri became an annual rival in 2014.

“Getting all three trophies was a huge goal for us,” said Arkansas linebacker Bumper Pool.

“We don’t have a guy on our team that had any of them,” said Arkansas Coach Sam Pittman, who will celebrate his birthday on Sunday. “Ever. Not one. Not one that earned any of them. To have those three trophies in there … is big.”

The Razorbacks claimed their first eight-win season since 2011. Arkansas will learn its bowl fate next Sunday after the SEC Championship Game, but there is chatter the Razorbacks could earn a bid to the Gator Bowl.

KJ Jefferson passed for 262 yards, including a 52-yard touchdown strike to ace receiver Treylon Burks, who surpassed 1,000 yards on the season and broke an Arkansas record with his sixth 100-yard game of the year with 7 catches for 129 yards. Jefferson also led the Razorbacks with 58 rushing yards on six carries.

“It was just a motivational thing coming into this whole week, knowing that game meant a lot to Coach Odom, and also it’s his birthday,” said Jefferson, who played through tightness in his lower back. “And we were chasing history. Nobody here had won the three trophies, so knowing we’ve got them now is a memorable thing. We’ll just cherish that for life.”

Arkansas allowed 219 rushing yards to ace tailback Tyler Badie, but that accounted for 69% of the Tigers’ total offense as the Razorbacks won that stat 426-316. Defensive captains Grant Morgan and Joe Foucha combined to give the game ball to Odom, the former Missouri coach who was 4-0 against the Razorbacks.

“I said in media this week that’s [Odom’s] a stone-cold killer and he’s the spear of our team, the tip of the spear,” Arkansas linebacker Hayden Henry said. “The guy is just a legend and he brings it every day.”

Burks, a junior who is projected as a first-round NFL Draft pick, was in on two touchdowns.

The Warren native took a handoff from Jefferson and ran the option with Raheim Sanders, pitching to the freshman for a 7-yard touchdown around right end to cap the Razorbacks 24-3 blitz to open the second half. Sanders’ second touchdown of the game, following his 1-yard dive play in a sluggish first half, gave Arkansas a 34-9 lead with 9:52 left in the game.

Burks said the option-play touchdown was “no doubt” more enjoyable for him than the 52-yard touchdown catch midway through the third quarter.

“I had to show my boy [Jefferson] how to really do it, how to score a touchdown,” Burks said during his postgame session with Jefferson. “It felt good to go out there and run that play. We’ve worked it throughout the week really hard and to have it work it means a lot.”

On defense, Pool had 13 tackles, Henry added 10 and Montaric Brown picked off a fade route from Connor Bazelak for his fifth interception of the season.

Pittman shared a brief and not very warm handshake with Missouri Coach Eli Drinkwitz after the game.

“We weren’t able to sustain drives and it got away from us late,” Drinkwitz said. “We were down a few guys just because of injuries and sickness, so we were trying to play a little bit tighter game. Once it got to two scores it kind of got away from us.”

Missouri ran defenders at the line to slow Arkansas’ vaunted run game and the Razorbacks had trouble making the Tigers pay for it in the first half.

The second half was a different story, as the Razorbacks racked up three of their five plays of 30-plus yards to begin pulling away.

“They had a nice game plan, but at some point you’ve got to go attack that,” Pittman said. “In other words, we’re a running team, we want to have success running, but if someone is going to take that away from you, you have to say ‘OK, we’re going to burn you deep. We’re going to make you pay. We’re going to run screens.’ I thought Coach [Kendal] Briles did a nice job of opening up the game plan.”

Jefferson had a 49-yard burst up the middle to set up Cam Little’s 36-yard field goal on the Hogs’ opening possession. Late in the first half, Burks broke open deep and caught a 43-yard pass to the 7. Sanders scored three plays later for a 10-3 Arkansas lead.

Super senior De’Vion Warren had his best game of the season with 32 rushing yards and 63 receiving yards. The wideout raced 55 yards with a tunnel screen early in the second half to set up Smith’s 4-yard touchdown for a 17-6 Arkansas lead.

Warren took an end around for 32 yards on the first play after Brown’s interception, and Arkansas made the Tigers pay on Burks’ pitch-play touchdown to Sanders.

Jefferson completed 15 of 19 passes and had a 212.1 efficiency rating.

“He’s a big-time quarterback and he did what he needed to do for his football team today,” Drinkwitz said.

“He did a great job doing what he’s known for,” Missouri linebacker Blaze Alldredge said. “He had some good quarterback runs and when he needed to he was able to take the top off with some strong throws.”

Missouri dominated time of possession through the middle section of the first half by relying on Badie and the run game. Through one stretch the Tigers ran 25 plays to seven for the Razorbacks thanks to a pair of three and outs and a lost fumble by Smith at the Arkansas 39.

The Tigers capitalized on that field position with Harrison Mevis’ 46-yard field goal to forge a 3-3 tie.

Arkansas finally broke out of its offensive funk on a series that opened with Jefferson’s 13-yard keeper over the right side.

After starting 0 for 3 on third-down conversions, Arkansas finally moved the sticks when Burks caught a pass in the left flats and turned it into a 7-yard gain and third and 4. On the next snap, the Tigers lost Burks, who sprinted untouched into the secondary. Jefferson’s pass was a little long but Burks was able to make the catch while starting to lose his footing. Burks stayed on his feet long enough for a 43-yard gain to the 7.

Three plays later, Sanders took a snap at fullback over right guard and muscled his way in after being stopped short for a moment to give the Razorbacks a 10-3 lead.