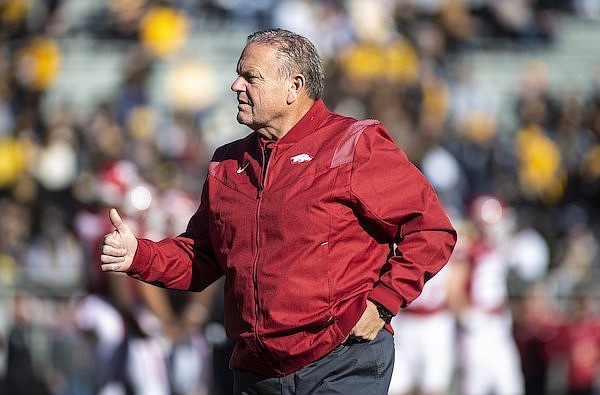 Arkansas coach Sam Pittman is shown prior to a game against Missouri on Friday, Nov. 26, 2021, in Fayetteville.

FAYETTEVILLE — Several betting websites set the win total for the University of Arkansas at 5.5 heading into the season.

That meant, in the eyes of oddsmakers, the Razorbacks had to slightly overachieve to reach the six wins needed for bowl eligibility.

It seemed like a reasonable projection given Arkansas’ schedule was universally rated the nation’s toughest with the annual gauntlet that is the SEC West along with playing Georgia from the East and a non-conference matchup with Texas.

But as has been the case in Coach Sam Pittman’s two seasons, the Razorbacks beat the projections — by a lot.

The Razorbacks finished the regular season 8-4 with a 34-17 victory over Missouri that wasn’t as close as the final score indicated.

Arkansas led 34-9 before the Tigers scored their first touchdown, plus a two-point conversion, with 1:25 left. Up to that point, the Razorbacks had a 24-3 edge in the second half.

The eight wins are the most by Arkansas in a regular season since 2011, when the Razorbacks were 10-2 and then beat Kansas State in the Cotton Bowl in what turned out to be Bobby Petrino’s final game before his off-the-field issues sent the program into a tailspin.

Pittman is the Razorbacks’ fourth coach since 2012, and the best his three predecessors did was 8-5 in 2015 under Bret Bielema when Arkansas beat Kansas State in the Liberty Bowl.

As Arkansas’ offensive line coach from 2013-15, Pittman helped the Razorbacks recover from a 3-9 record to go to back-to-back bowl games before he left to take the same position at Georgia.

Pittman helped the Bulldogs win the SEC championship and reach the College Football Playoff title game after the 2017 season and win the SEC East in 2019.

“We haven’t been relevant for a while. And for us to do that for those kids in that locker room, that’s a big, big deal. So I’m proud of them.”

Pittman is now 11-11 at Arkansas with 18 of those games against SEC teams. He’s 7-11 in SEC games and this season Arkansas broke losing streaks of nine to Texas A&M and five each to LSU and Missouri. The Razorbacks also beat Mississippi State at home for the first time since 2011.

Senior linebacker Hayden Henry was among the players who endured those winless SEC seasons.

“It’s just a lot of time and effort that’s accumulated to where we are now, 8-4,” Henry said. “It’s crazy to think back in the seasons I’ve had here.

“We’ve had a lot of struggles, and to come back in my fifth year and get a chance to go 8-4 and win all three trophy games, it’s a great way to go out.”

All SEC teams played a 10-game, all-conference schedule in 2020 due to the coronavirus pandemic.

Before the schedule adjustment, several oddsmakers posted Arkansas’ over/under for victories at 3.5. That’s when the Razorbacks were scheduled to play Notre Dame, Nevada, Charleston Southern and Louisiana-Monroe along with the SEC West teams and Tennessee and Missouri from the East.

When the SEC added Georgia and Florida to Arkansas’ 10-game schedule, oddsmakers reduced the Razorbacks’ over/under to 1.5 wins.

Arkansas wasn’t favored in any of its games in 2020, but finished 3-7 by beating Mississippi State, Ole Miss and Tennessee.

The Razorbacks’ record should have been 4-6 given that the SEC office admitted an officiating error that cost Arkansas a victory at Auburn.

Arkansas also lost at Missouri on a last-play field goal and had a late field goal blocked in a three-point loss to LSU.

With bowl eligibility rules not applying last season, the Razorbacks were invited to the Texas Bowl to play TCU.

But the Texas Bowl was canceled because of a covid-19 outbreak among the Horned Frogs.

Cancellations haven’t been an issue in college football this season.

Arkansas qualified for its first bowl game since 2016 with a 31-28 victory over Mississippi State three weeks ago.

Beating LSU and Missouri since then has enhanced Arkansas’ bowl resume, and possible options could include coveted Florida destinations for the Gator Bowl in Jacksonville and Outback Bowl in Tampa.

Bowl matchups won’t be announced until next Sunday after the conference championship games are played and selections for the four College Football Playoff spots are finalized.

Arkansas has played eight teams that were ranked at some point this season and the Razorbacks went 4-4 in those games.

The Razorbacks figure to rise from their current No. 25 spot in the College Football Playoff poll after a decisive victory over Missouri.

Three of Arkansas’ losses were on the road to teams in the CFP poll — No. 1 Georgia, No. 3 Alabama and No. 9 Ole Miss — as well as to Auburn at home.

Those four teams finished the regular season with a combined 39-9 record.

“Winning eight, that means we have kids that bought in and a really good assistant coaching staff,” Pittman said. “They’re all very loyal to me and they make me look good and I really appreciate all of them.”