Briles more than a play caller 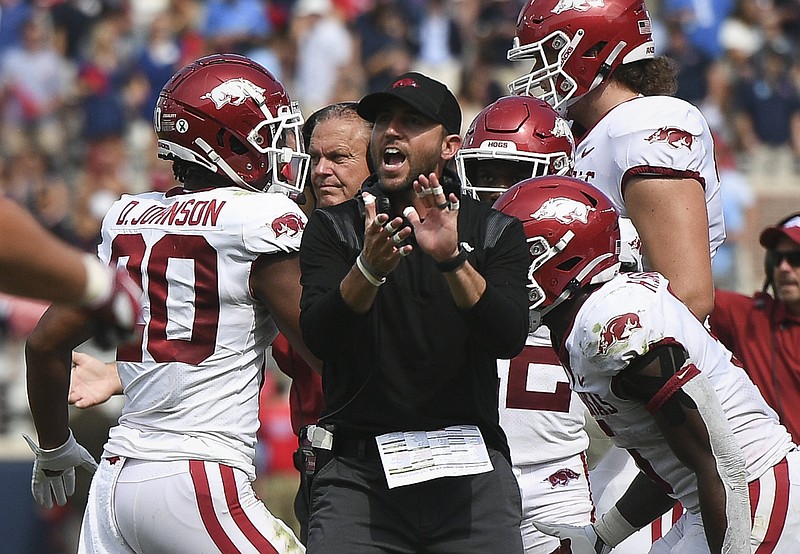 Arkansas’ quarterbacks coach does some coaching, too.

Consider Feleipe Franks. The 2020 graduate transfer via Florida arrived in Arkansas as a good SEC quarterback.

He left Arkansas a better one, good enough to be six games NFL used this season as the backup to Atlanta Falcons quarterback Matt Ryan.

However he never quite dominated at Florida like his 2020 Arkansas season tutored by Briles under then first-year Coach Sam Pittman.

Now consider what sophomore quarterback KJ Jefferson, the starter in Franks’ one-game injury absence in 2020, has done coached by Briles starting every game for these 2021 bowl-bound Razorbacks (8-4, 4-4 SEC).

As team leaders and offensive captains, Franks in 2020 and Jefferson in 2021 took command unquestioned.

They excelled much on their own but they did have help. Treylon Burks’ help. And Briles’ help, too,

Pittman recalls from last season Franks' long bombs to Burks, and this season Jefferson to Burks 66 times for 1,104 yards and 11 touchdowns.

From calling the plays designed for Jefferson and Burks, to monitoring daily Jefferson’s fundamentals, Briles contributes to their success.

“The thing is Coach Briles teaches how to throw that long ball,” Pittman said. “Because obviously Feleipe was good at throwing that long ball and KJ is just tremendous at throwing it. He’s just maturing every week.”

Arkansas, with Jefferson struggling to complete passes, trailed underdog Rice 17-7 with 10:28 left in the third quarter. Though the Razorbacks scored 31 unanswered and won, Arkansas social media bristled fretting the quarterback that can’t pass while clamoring for the backup quarterback to play.

Since then, other than blanked at No. 1 Georgia, they’ve either won or scored between 23 and 51 points.

Nobody clamors for anybody but KJ anymore.