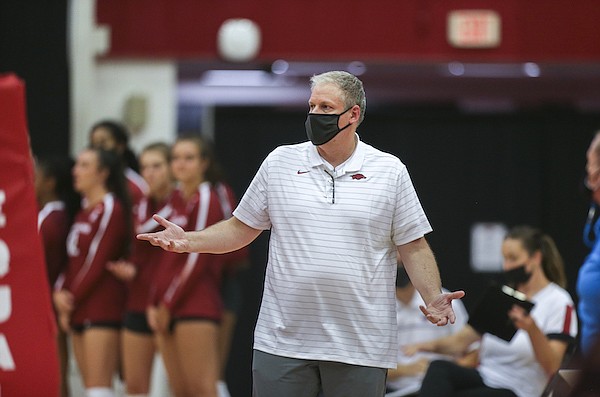 FAYETTEVILLE — The NCAA bubble may have burst for the University of Arkansas volleyball team for the second consecutive season, but the Razorbacks will continue to play in the postseason.

Arkansas has a first-round bye in the National Invitational Volleyball Championship, which was announced Sunday evening after the NCAA selections.

The Razorbacks will take on the winner of the Stephen F. Austin-Jackson State matchup in Nacogdoches, Texas, at 6:30 p.m. on Saturday. Arkansas is the only team in the field with a bye.

The tournament consists of 31 teams, and the first and second rounds will take place at regional sites Dec. 2-5. Round three will be Dec. 6-8, the semifinals are Dec. 8-11 and the championship is Dec. 12-14.

The NIVC was revived in 2017 after a 22-year hiatus to provide an additional postseason opportunity for Division I teams.

The Razorbacks (19-10) were not selected for the NCAA Tournament despite finishing fifth (10-8) in the SEC and 46th in the RPI. Arkansas defeated Ole Miss and South Carolina, which made the tournament.

The Gamecocks (14-14) made the field despite a 3-0 loss to the Razorbacks last weekend and a 6-12 SEC record, but they own three top-25 wins. It was the second consecutive season Arkansas missed out on a bid.

The Razorbacks were the first team out, according to tournament officials, this year and one of the first four out last season.

It was the first time the Arkansas finished over .500 in the SEC in back-to-back seasons since 2004-05. The program has not made the NCAA Tournament since 2013.

The Razorbacks had a pair of near misses that probably would have put them over the top and into the field. They had match point on the road at defending national champion Kentucky, but fell 16-14 in the fifth set.

The NCAA decided to slice the number of teams from 64 teams to 48 and shift the championship to the spring because of the coronavirus pandemic a year ago.

Junior outside hitter Jill Gillen was selected as the SEC Scholar-Athlete of the Year and to the All-SEC Team for the second consecutive year. Libero Courtney Jackson was also named to the All-Freshman Team.