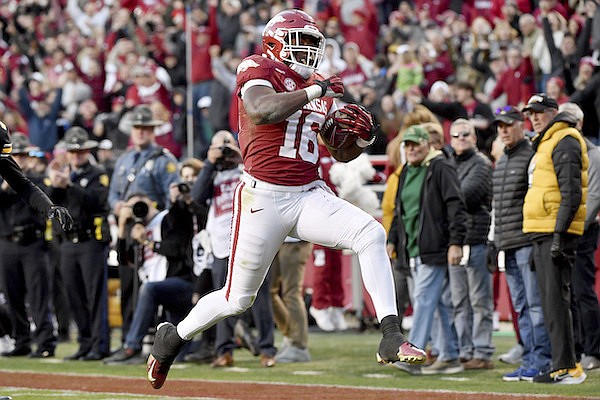 Arkansas receiver Treylon Burks (16) runs for a touchdown after a big catch against Missouri during the second half of an NCAA college football game Friday, Nov. 26, 2021, in Fayetteville, Ark. (AP Photo/Michael Woods)

FAYETTEVILLE — Standout wide receiver Treylon Burks isn’t letting on whether he’ll declare for the NFL Draft, where some analysts consider him a first-round selection, or return for his senior year as an Arkansas Razorback.

“You know, I just really want to finish the season out, and then I’ll let God decide on the other,” Burks said after Friday’s 34-17 win over Missouri when asked if he had thought about what lies ahead for him.

The Warren native has put together one of the greatest seasons and careers in University of Arkansas history.

Burks’ 1,104 receiving yards this season rank third on the single-season list behind Cobi Hamilton’s school record 1,335 set in 2012 and Jarius Wright’s 1,117 in 2011. Burks would need 14 receiving yards in the Razorbacks’ bowl game to reach second place.

He has 2,399 career receiving yards to rank sixth on Arkansas’ list, just 11 yards shy of Joe Adams in fifth place with 2,410 yards.

Pool hasn’t committed yet but he sounds open to the idea.

“Absolutely,” Pool said. “I think that we’re … focused on winning this bowl game. And then that will all take care of itself when it needs to.”

A Lovejoy, Texas, native whose family has deep ties to the Razorbacks, Pool has 120 tackles this season to take his career total to 344 to rank ninth in school history after surpassing Rickey Williams (343 in 1984-87), the father of teammate Zach Williams, on Friday.

Pool called the seasons enjoyed by position mates Hayden Henry and Grant Morgan a “perfect example” as they were involved in a winning season for the first time as collegians.

“It’s been such a privilege to play next to them and what they’ve done for the university,” Pool said. “You know, I don’t think that people realize the impact that two players coming back can make, and I’m just so proud that I can call them friends and got to play next to them.”

Quarterback KJ Jefferson had another efficient outing in the Razorbacks’ win over Missouri to jump up to sixth in NCAA pass efficiency.

The NCAA’s passer rating is a formula that takes into account yards per pass and touchdown-to-interception ratio along with passing yardage and completion percentage.

Jefferson’s 66.9% completions ranks 24th in the FBS and second all time at Arkansas behind Feleipe Franks’ one-year-old record of 68.5%.

Jefferson has also thrown 170 passes without an interception, dating back to his heave into the end zone to end the first half at Ole Miss on Oct. 9.

UA officials posted a picture of Sam Pittman sitting on a throne with a Happy Birthday greeting to the second-year coach on the large video board following Friday’s 34-17 win over Missouri.

“Actually, Sunday is my birthday and I’ll be celebrating going into people’s homes [recruiting],” Pittman said. “I feel good. I guess I should be thanking the good Lord I made it to 60.”

Arkansas broke three long losing streaks against conference opponents this season, including a five-game skid against Missouri, with Friday’s 34-17 win in the Battle Line Rivalry.

The Razorbacks also broke a nine-game losing streak against Texas A&M in the Southwest Classic and a five-game streak against LSU in the battle for the Golden Boot.

Former Razorback football players Matt Jones, Barry Foster, Brad Taylor and Tommy Brasher were among the six ex-Arkansas athletes who were selected for induction into the Arkansas Sports Hall of Fame Class of 2022. The others, announced on Sunday, were basketball standout Corey Beck and track and field star Tyson Gay.

The class will be formally inducted on April 8 at the Statehouse Convention Center in Little Rock.

Little is the first Razorback to hit the 100-point mark in a season since Alex Collins scored 120 points on 20 touchdowns in 2015, tying Bill Burnett’s school record set in 1969.

The Razorbacks have two players over 500 yards in total offense in quarterback KJ Jefferson (3,132 yards) and tailback Trelon Smith (592). However, two other players are on the brink of the 500-yard mark in total offense, which does not include receiving yardage.

Freshman Raheim Sanders has 499 total yards on 101 plays, and sophomore Dominique Johnson is at 498 yards on 86 plays.

The Razorbacks have managed to keep the “redshirt” status for a pair of freshmen in linebacker Christopher Paul and receiver-returner Bryce Stephens.

The pair have played in three games, which makes them eligible to play in the bowl game without losing their redshirt status.

Paul has one tackle after playing in late relief against Georgia Southern, Arkansas-Pine Bluff and Missouri.

Stephens played against Georgia Southern, UAPB and LSU with his greatest contribution coming in Baton Rouge. Stephens had a 26-yard punt return that led to a Cam Little field goal to open the scoring and also had a successful fair catch at the Arkansas 14 in the waning seconds of regulation.

Jefferson accounted for 320 yards and 1 touchdown against Missouri. The Sardis, Miss., native completed 15 of 19 passes for 262 yards and a touchdown and rushed for a team-high 58 yards.

Henry racked up 10 tackles, including a team-high 7 solo stops. The Pulaski Academy product also had 1 tackle for a 3-yard loss, a pass breakup and 2 quarterback hurries.