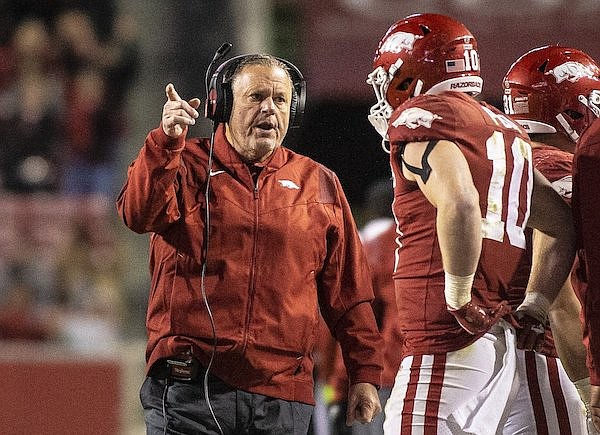 Arkansas coach Sam Pittman (left) speaks with linebacker Bumper Pool during a game against Missouri on Friday, Nov. 26, 2021, in Fayetteville.

FAYETTEVILLE — The nation’s highest-ranked four-loss college football team will have a relatively chill week with a bit of weight lifting for the University of Arkansas players and recruiting by the coaching staff as the program awaits its first actual bowl game in five years.

The Arkansas Razorbacks (8-4, 4-4 SEC) moved up two spots to No. 23 in this week’s Associated Press poll and re-entered the USA Today coaches poll at No. 25.

The next set of College Football Playoff rankings, where the Razorbacks were slotted at No. 25 last week, come out tonight.

For the first time since 2011, the Razorbacks have won eight regular-season games and also enter the postseason as a ranked team.

“Well, 8-4, depending on what your schedule is, sometimes is pretty good. But to have the hardest schedule in football and be 8-4? We really kind of got embarrassed against Georgia and after that we were in every game.”

Georgia is the current No. 1 team in every poll, while Alabama is No. 3 and Ole Miss No. 9 in the latest College Football Playoff rankings.

The Razorbacks are tied for the third-best record in the SEC West with Texas A&M and Mississippi State but have head-to-head wins over both of those schools, which might factor into bowl selections.

UA officials sounded hopeful last weekend the Razorbacks will receive a bid to a Florida-based bowl for the first time since the 2006 SEC West title team fell 17-14 to Wisconsin in what was then the Capital One Bowl and is now the Citrus Bowl in Orlando, Fla.

A source with knowledge of the process said Arkansas will join Kentucky (9-3) and Texas A&M as the top SEC teams in consideration for the SEC’s spot in the Citrus Bowl, which will be played at noon on Jan. 1, 2022, at Camping World Stadium. The SEC team will face an opponent from the Big Ten in that game.

The Razorbacks are also in the running for a spot in the Outback Bowl in Tampa, Fla., which will pit a Big Ten team against an SEC team at 11 a.m. on Jan. 1 at Raymond James Stadium.

The Gator Bowl in Jacksonville, Fla., is also a possibility for the Razorbacks. It will feature an SEC team against an Atlantic Coast Conference opponent, and it will take place on Dec. 31 at 10 a.m.

The SEC’s group of six bowls — in addition to the Outback and Gator bowls — are the Duke’s Mayo Bowl in Charlotte, N.C., the Texas Bowl in Houston, the Liberty Bowl in Memphis and the Music City Bowl in Nashville. Arkansas accepted a bid to the Texas Bowl with a 3-7 record last year when normal bowl eligibility requirements were waived, but a covid-19 issue within the TCU program scuttled the game.

Pittman celebrated his 60th birthday Sunday while on the recruiting trail.

“That’s just how it is,” said Pittman, who spent Saturday enjoying time with his wife, Jamie, and other family members and friends.

The Razorbacks players rejoiced in having down time at the end of a grind against what was ranked the nation’s toughest schedule.

Pittman said he felt sure the entire team would take part in voluntary “lifts” that were taking place this week, as well as the mandatory study table.

The Razorbacks are scheduled to meet again Sunday to discuss the team’s bowl destination and the practice itinerary that will follow. That meeting will be followed by finals week and the start of bowl practices somewhere around Dec. 9 or 10, Pittman said.

“We’ll get a couple of [practices] or three that weekend and it will run into recruiting as well, a recruiting weekend,” he said. “Then we’ve got different plans for whoever chooses us. But we’re going to be off for a few days.”

Pittman’s next media appearance is likely to be Sunday after bowl bids come out following Saturday’s SEC Championship Game between Alabama and Georgia.