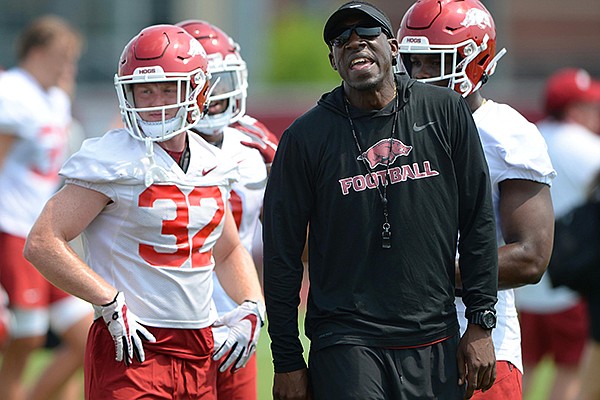 When University of Arkansas Coach Sam Pittman hired running backs coach Jimmy Smith, the hire was praised because Smith was a respected high school coach in Georgia before joining the Georgia State staff in 2019.

Sophomore defensive lineman T.A. Cunningham, 6-6, 265 pounds, of Johns Creek, Ga., has 30 scholarship offers despite growing up playing basketball and only playing football for the first time as a freshman. Arkansas, Georgia, Southern Cal, Florida, LSU, Michigan, Penn State, Ole Miss and Florida State are just some of his offers.

He and his father Terrance Cunningham hold Smith in high regard and a visit to Fayetteville is on the agenda.

“One of the things told me was that it’s my decision and I don’t owe a school anything,” Cunningham said. “Instead of talking about ‘Oh, Arkansas has this. Arkansas has that.’ He started out with a different recruiting approach and kind of told me I’m the one in control of this decision. I was just getting recruited. I wasn’t as recruited as I am now. So it was kind of like some of the best advice I’ve gotten.”

Cunningham, who played his freshman season at Providence Christian Academy in Lilburn, Ga., is 247 Sports’ No. 1 defensive lineman and No. 7 overall prospect in the nation for the 2024 class.

He enjoys his talks with Smith.

“It’s more than just a ‘hey,’ it’s usually me asking for advice or it’s me talking to him about a game or something that may of happened from the weekend,” Cunningham said. “Whenever I talk to him it’s usually quality conversations rather than just a little coach checkup or something like that.”

Prior to his job at Georgia State, Smith turned Cedar Grove High School into a powerhouse as its head coach by winning Class AAA state championships in 2016 and 2018 while compiling a 67-14-1 record in six seasons before joining the Panthers’ staff in March 2019.

An A and B student, Cunningham is considering studying sports marketing in college. Smith being from Georgia is a plus.

“It’s kind of cool to be able to talk to him about a school I’m about to play and him actually understand the school’s history, or if I’m saying I’m playing this person or that person so that’s kind of cool in it’s own way,” Cunningham said.

The elder Cunningham appreciates Smith being up front and trustworthy.

“He established from the forefront that he was just real, no agendas, he’s going to tell like it is and one thing I’ve always been able to appreciate the way I was raised is a man that’s candid,” said Cunningham, who’s in private business and is also a Pentecostal preacher. “A man that can just tell it like it is no matter if it fits his agenda or not. Whether it benefits him or not. That’s the way he approached it and the impression he left and that was very impressive to me and I think I can speak for T.A. as well.”

Cunningham, 6-9 played basketball at Texas Southern while his wife Alexandria. 6-2 played at Appalachian State. He said while some coaches can be disingenuous, he doesn’t get that from Smith.

“His pitch so to speak didn’t sound like he was like a used car salesman,” Terrance Cunningham said. “Just trying to sale you the world, so it left an impression. This guy is real, this guy is sincere. I know if Coach [Sam] Pittman has people like that on his staff then I said that must be a heck of a situation they got going on there at Arkansas.”

The elder Cunningham’s mother is from Lake Village and now lives in New Mexico. He has several other family members living in southern and central Arkansas.

Smith is willing to help the Cunninghams regardless where he T.A. attends college.

“He also left an impression that if you don’t come to Arkansas, I’m still someone you can rely on as a confidant source that’s willing to help you through this process,” Terrance Cunningham said. “That was big. That’s tremendously big.

“He’s a trusted source that we can call.”