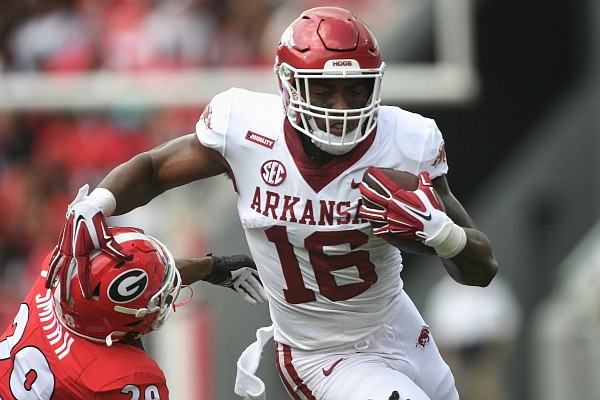 FAYETTEVILLE — For college football fans who enjoy quality wide receiver play, Saturday’s matchup between Arkansas and Ole Miss should be a treat.

The game will feature two of the Southeastern Conference’s premier pass catchers in Razorbacks star Treylon Burks and the Rebels' Dontario Drummond, who have 46 catches, 765 yards and 6 touchdowns between them in 2021.

And beyond those two talents, there are a number of more-than-capable playmakers. Arkansas coach Sam Pittman said Wednesday that Ole Miss’ group of receivers remind him a bit of those on his side.

“They can go catch contested balls, run really good routes,” Pittman said. “I think (Ole Miss quarterback Matt) Corral — and I’m not speaking for him — knows exactly where they’re going to be. They catch the ball exceptionally well, and certainly can do something with it when they do.

“I think they’re really talented. You can’t throw the ball — obviously you have to protect it — if you don’t have great wideouts, and they certainly do.”

Drummond already has a pair of 100-plus yard receiving games this season — 177 yards and 1 touchdown on 9 receptions against Louisville, and 107 yards and 2 touchdowns on 6 catches against Austin Peay.

He also possesses big-play potential. He has long passes of 34 and 49 yards this season.

Braylon Sanders is Corral’s No. 3 target and a good one, entering the weekend with 165 receiving yards and a pair of touchdowns. He brought in receptions of 28 and 45 yards in Weeks 1 and 3, respectively.

Ole Miss this weekend will likely be without Jonathan Mingo, its second-leading receiver, due to a foot injury sustained ahead of the Rebels’ game at No. 1 Alabama last Saturday. He finished with 136 yards against Tulane and added 99 yards and 1 touchdown against Austin Peay as well.

“That play-action (passing) that they do, as well as we do, it freezes you and you can throw it right over the top of a linebacker’s head because of their run game, too,” Pittman said. “They run really great routes and are really, really explosive there at the receiver spot.

Arkansas receivers Tyson Morris and Warren Thompson have complemented Burks for stretches and shown flashes in previous games, forcing defenses to account for them, too. Morris has multiple 30-plus yard receptions this season and Thompson reeled in a 60-yard touchdown from quarterback KJ Jefferson against Georgia Southern.

Speedy receiver De’Vion Warren has a long of 44 yards on the season.

But the main attractions on the perimeter are Burks and Drummond, who are having similar statistical seasons. Burks leads Arkansas with 22 catches for 383 yards and 2 touchdowns, and Drummond comes in with 24 grabs for 382 yards and a team-high 4 touchdowns.

Burks, a Warren native, holds a 71.7 cumulative receiving grade, according to Pro Football Focus, which leads the Razorbacks. His run-after-catch ability and presence is not lost on Kiffin.

“Treylon is very explosive, obviously,” Kiffin said. “He has two touchdowns of 85 yards or more. That says a lot.”

Burks’ play in Saturday’s game will be critical, Jefferson said Tuesday. In the teams’ meeting last season in Fayetteville, he had a career day with 11 catches for 137 yards and a highlight reel one-handed touchdown catch.

Though he was an offensive difference maker in the game and made the play of the day, Burks downplayed the grab.

"Really, I just treat it as I caught the ball and made a touchdown for the Razorbacks,” he said this week. “It really didn't mean a lot to me (unless) we got the win."

Drummond has a PFF receiving grade of 87.6 through Ole Miss’ first four games.

“I really like Drummond,” said Pittman, who added, "I think he has a whole lot of talent.”

Arkansas cornerback Montaric Brown said Drummond is a high-caliber player in the SEC. If he and Drummond are paired together, it could be one of the key matchups in the game.