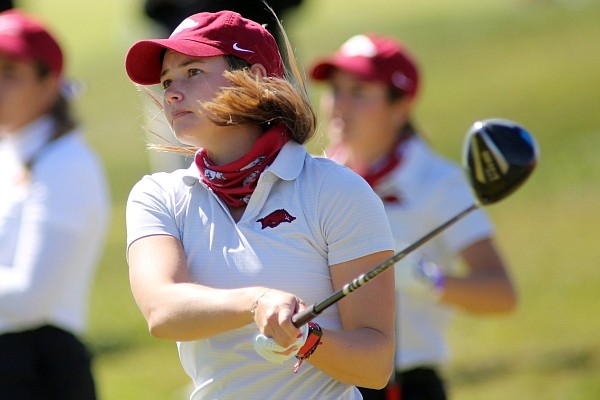 Razorback golfer Brooke Matthews watches her drive on the first tee Monday, October 5, 2020, during the inaugural Blessings Collegiate Invitational at the Blessings Golf Club in Johnson.

JOHNSON — Coming into Tuesday’s second round of The Blessings Collegiate Invitational, Brooke Matthews and the University of Arkansas women’s golf team trailed UCLA by six strokes.

The mantra from Razorback Coach Shauna Taylor to regroup her team was simple.

“My message was, ‘Let’s just do Arkansas,’” she said. “We know this golf course, and we know the plan that we need to execute to play well. We knew if we could just do that, we would be in a good position for the last round.”

Arkansas shot a 14-under 274 to set an event single-round record Tuesday for a two-day total of 569. The performance allowed the Razorbacks to leap frog the Bruins and claim an 11-stroke cushion heading into today’s final round of competition.

Arkansas was helped in large part by Matthews, who shot a 6-under 66 to take the women’s individual lead. The Rogers High School product connected for seven birdies and avoided major mistakes to finish with a two-day total of 138, three strokes ahead of second-place Alessia Nobilio of UCLA.

“My mindset was just to stay aggressive,” Matthews said. “My ball striking was a little off yesterday, so I came here early, got a good warmup in and was hitting it a lot better. I think I missed one green and struggled a little with the putter. But aside from that, I was able to get enough to fall for a really solid day.”

Not only was Matthews on a tear, but her teammates as well. Miriam Ayora posted a 4-under 68, Cory Lopez a 3-under 69 and Kajal Mistry a 1-under 71. All four Razorbacks are among the top 11 on the individual leaderboard.

“I think it was definitely contagious,” Taylor said of her team’s success. “Everybody was in the round, which makes it so much nicer for converting birdie opportunities. It’s really momentum-driven playing in this format, so having everybody in a good place definitely keeps the girls energized and focused.”

Taylor stressed the importance of being patient on The Blessings course, something that will be critical during today’s final 18 holes.

“It’s a challenge every single hole,” Taylor said. “You have to stay focused and stay present. I think our team did a fantastic job with that.”

Matthews said the team will need to play smart to secure a win today.

“We have to go out there and do the same thing we did today,” she said. “It’s not a golf course you can force it on, so we have to stick to our plan and play our game.

On the men’s side, the Hogs maintained the lead they built in first round. As a team, Arkansas shot a 1-under 287 and holds a one-stroke lead over Illinois.

Luke Long protected his individual first-place spot by shooting a 5-under 67 for the second straight day.

The Razorbacks entered the final hole trailing the Illini by two strokes, but Long, John Daly II, and Julian Perico all birdied to reclaim the advantage.

Daly II shot 4-under 68, Perico 2-over 74 and Mateo Fernandez De Oliveira a 1-under 71 to round out the Arkansas scoring. The Hogs enter today’s final round at 11-under 565 overall.

The top three men’s teams are separated by two strokes, with Illinois and Ole Miss on the Razorbacks’ heels.

Tee times and live stats can be accessed at golfstat.com. The tournament is broadcast live on the Golf Channel and is available via the NBC Sports app.