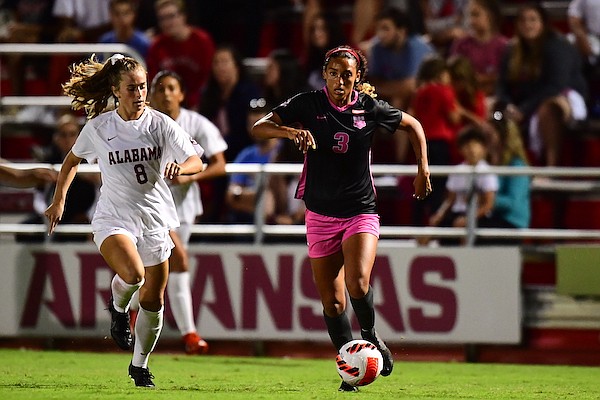 Arkansas' Kiley Dulaney (3) pushes the ball upfield during a game against Alabama on Thursday, Oct. 7, 2021, in Fayetteville.

FAYETTEVILLE — The No. 7 Arkansas women’s soccer extended its program-record winning streak to 10 games with a 3-1 victory over Alabama on Thursday night at Razorback Field.

The last Razorback loss came on Aug. 22 22 when they fell 1-0 in overtime at then-No. 3 North Carolina. Despite the unprecedented run of success, Arkansas coach Colby Hale said the win streak means nothing.

“We don’t care,” Hale said. “It’s about how do we win the next game. We’ve got a big game against Vanderbilt (on Sunday) that we have to be ready for.”

Arkansas (10-2, 5-0 SEC) had the ball in the net in the eighth minute of the match but Parker Goins’ header was ruled offside and kept the game level. After being called offside three times inside the first 15 minutes, sophomore forward Ava Tankersley timed her run to perfection and scored her fourth goal of the season with a one-time side-foot finish off a cross from sophomore Kiley Dulaney.

Against the flow of the game, the Crimson Tide (7-7, 2-3) capitalized on a set piece to tie the game just five minutes before halftime. Junior forward Macy Clem needed every bit of her 5-foot-8 frame as she leaped above the Razorback defense to head home the equalizer.

The teams were tied 1-1 at halftime.

Coming out of the intermission, the Razorbacks changed their formation to add an extra attacker. The tactical change may have caught an Alabama defense by surprise as it conceded two goals in the first three minutes of the second half.

“We just needed an extra forward up front,” Hale said. “We thought we could get a couple of goals and we did.”

Senior defender Bryana Hunter — pushed forward for an attacking free-kick — put the Razorbacks back on top in the 46th minute with a glancing header. Just one minute later, Dulaney unleashed a left-footed strike from the top of the box into the top right corner for the first goal of her career.

“Oh my gosh, I almost started crying, and when everybody else came over to celebrate it made it even better,” Dulaney said.

The Razorback defense buckled down and negated any potential drama by shutting out the Alabama front line in the second half. Hale said he thought his team was going to claim a fourth goal in the 85th minute through freshman Sophia Aragon’s coast-to-coast run. She picked up the ball inside her the defensive half and showed some spectacular ball control as she dribbled past the entire Tide defense to get a clean breakaway on goal, but her shot was straight into the arms of the Alabama goalkeeper.

“She’s going to be legit,” Hale said of Aragon.

With Thursday’s win, Arkansas has defeated Alabama in six of the last seven meetings.

Throughout the 10-game win streak, the Razorbacks have outscored their opponents 37-5. Arkansas has outscored its five SEC opponents by a combined 15-4.