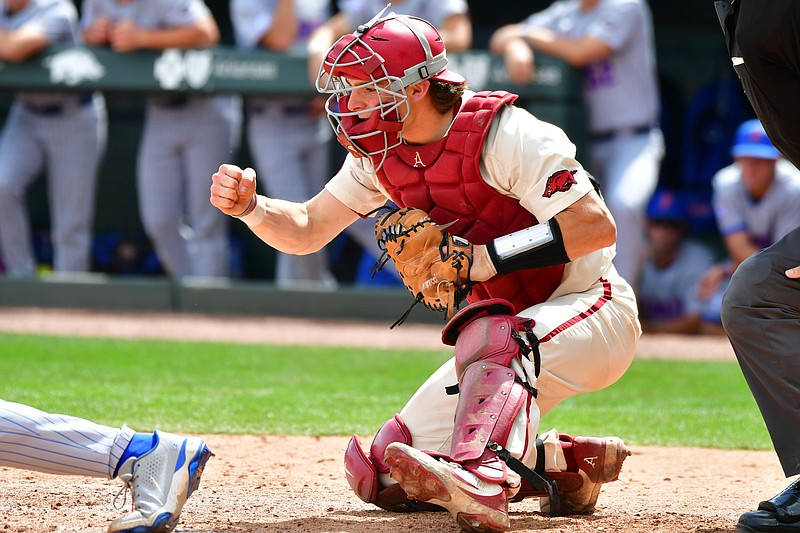 FAYETTEVILLE — Their freshman seasons at Arkansas didn’t end with a trip to Omaha, but catcher Dylan Leach and right-handed pitcher Gabe Starks wound up playing together in a World Series in 2021.

They concluded their summer baseball season by winning the NBC World Series. The NBC — short for National Baseball Congress — is an organization of 17 amateur leagues in North America, including popular college summer leagues in California, Alaska and Kansas.

Leach and Starks played for the Santa Barbara Foresters of the California Collegiate League. Arkansas infielder/outfielder Ethan Bates also played for the Foresters this summer, but left the team before the NBC World Series, which was played in Wichita, Kan., for the 87th time in August.

Leach and Starks each contributed to the Foresters’ championship-clinching 14-2 victory over Lonestar Baseball of Austin, Texas. Leach went 3 for 5 with a 2-run home run from the right side, and Starks pitched 1 inning of scoreless relief.

“I haven’t hit a ball that felt like that in a long time,” Leach said.

The Carthage, Texas, native who reclassified to enroll at Arkansas a year early, returned to switch hitting this summer. He tried hitting only from the right side late in his first season with the Razorbacks.

“I did that half the summer and I wasn’t hitting too well, wasn’t seeing the ball good enough,” Leach said. “I flipped back to switch hitting and then I started seeing the ball better, started hitting.”

Leach had a memorable experience on his way to Wichita. The 21-hour trip from California to Kansas included a stop at the Grand Canyon.

While there, Leach and pitcher Justin Eckhardt of Texas decided to throw a bullpen.

“I was like, ‘Guys, this is a once-in-a-lifetime opportunity. We’re never going to get to see the Grand Canyon. Let’s stop by and and see it,’” Leach said. “Well, he was scheduled to throw a bullpen that day, too. We threw in the parking lot a little bit, then we had the great idea, ‘Hey, let’s just throw on the edge of the Grand Canyon.’ We threw a 45-pitch bullpen right on the edge.”

This fall, Leach has competed with transfers Michael Turner of Kent State and freshman Max Soliz to replace departed three-year starting catcher Casey Opitz. Leach is the only player in the program with experience playing at Arkansas.

“Dylan is a known commodity for us since he was here last year,” Arkansas pitching coach Matt Hobbs said on the WholeHog Baseball Podcast. “He worked with Opitz for a year. Blocking, throwing, kind of handling those parts of the game, he’s very good at.”

He caught all but one of Starks’ appearances as a freshman. Starks said he saw growth in Leach’s communication over the summer.

“He’d have mound visits and talk to me, and just stepped up to be a leader, as he should,” Starks said. “He helps me out and calms me down.”

Starks was good for most of the summer and pitched predominantly as a reliever. He finished the summer with 9 earned runs allowed, struck out 32 and walked 11 in 22 2/3 innings. He was selected to play in the California Collegiate League’s all-star game in July.

His stats would have been better if not for his final outing before the all-star game, when Starks allowed a three-run home run to end a game against the Arroyo Seco Saints.

“He went home and re-evaluated himself,” Leach said. “I talked to him and he said, ‘Man, I’ve got to get better,’ and he did.”

After the break, Starks allowed 5 earned runs, struck out 15 and walked 7 in 12 innings over 5 appearances, part of a 21-game win streak for the Foresters.

Starks started twice after the break, accounting for all of the runs he allowed in the second half of the summer. In his final three outings, Starks pitched 4 2/3 innings of scoreless relief.

“I felt like I got better in my secondary pitches and holding runners and stuff,” said Starks, who throws a curveball and is working on developing a changeup and cutter. “Just getting better knowledge and a feel for the game, that’s what I felt like I got better at. I think I can take that to the Hill and try to implement that toward next season.”

Starks, who grew up in Pine Bluff, showed some signs of dominance as a freshman, but he was inconsistent. He finished the year with 4 runs allowed, 6 strikeouts and 3 walks in 4 innings — the majority of the trouble coming against his hometown team, UAPB, that included some former teammates from Watson Chapel High School.

“He’s improved a lot,” Leach said. “He’s added a new pitch (the cutter) to the mix and it’s working well. His command has gotten better. He’s hitting 93-96 and can run it up there 97 once in a while."

Hobbs said he thinks Starks will compete to be the team’s closer, along with senior Elijah Trest and freshman Nick Moten.

“He’s got kind of a really low heartbeat and just goes out there and pitches,” Hobbs said of Starks’ closer qualities.

“Gabe Starks is going to be a cool story, I think — a kid from right here in Arkansas, in Pine Bluff. Last year he got a little bit of a taste of it and was exciting with his stuff. Now that stuff has harnessed itself into two breaking balls for a strike and a fastball that’s up to 97.”