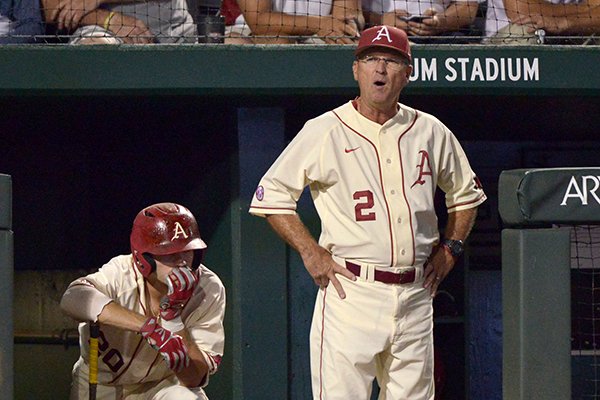 The 20th-year Arkansas baseball coach has turned to batting warmups, hoodies and jackets, shunning the tradition of baseball coaches being in full uniform like the players. The Arkansas Democrat-Gazette’s last photo of Van Horn in a jersey top was from the 2017 regional final against Missouri State.

If Van Horn decides to wear a jersey top in 2022, it will be in a jersey number, 21, he has never worn during all his years at Arkansas. He is in his 25th season with the program, counting his days as a player and graduate assistant in the 1980s.

The No. 2 jersey he has worn throughout his time in Fayetteville will go to shortstop Jalen Battles in 2022, the fulfillment of a promise Van Horn made last year.

It began as banter, with Van Horn telling Battles last fall he could wear No. 2 if he returned for a second year at Arkansas. Battles transferred from McLennan (Texas) Community College in the summer of 2020 and was considered a strong draft prospect.

“Spring hit and he started talking about it a little bit,” Van Horn said. “Halfway through the season we’re out there doing some ground-ball work and he says, ‘Coach, if I come back next year are you going to give me No. 2?’ I said, ‘Jalen, you’re not going to come back next year; you’re going to sign.”

Similar exchanges continued leading up to the MLB Draft. Battles told Van Horn it would take a lot of money for him to go pro, but Van Horn said he still didn’t believe Battles would return to Arkansas for another season.

“Then I talked to his dad the night before the draft and I started thinking, ‘He might come back,’” Van Horn said. “Then he happened to forward me another text about his uniform and I say, ‘It’s all yours if you come back.’

“Sure enough he’s wearing No. 2 and I’ll be wearing whatever number is available.”

Battles’ father, Fred, said this summer that third- and fourth-round offers weren’t near their asking price for a signing bonus.

“The draft process was very stressful,” Jalen Battles said in August. “Me and my dad, we came up with a number that we were going to stick to, and when the second day came, the number wasn’t there. I couldn’t sell myself short.

“Either you get your (signing bonus price) or you go back to Arkansas for another year, so it was really a win-win situation for me.”

Battles, who is not practicing this fall due to shoulder surgery, said getting the jersey number from Van Horn was special.

“I feel like with the right jersey number, people feel comfortable,” Battles said. “You can really feel the number. You feel uncomfortable if you don’t have the right number.”

Battles said any single-digit number is fine, but he prefers to wear No. 2 because his favorite player, Derek Jeter, wore it during a Hall of Fame career with the New York Yankees. Battles' younger brother is named Jeter.

Van Horn said No. 2 has been a popular request from players in recent years.

“I bet there are five guys a year who wanted No. 2 because that’s what they wore in high school,” Van Horn said.