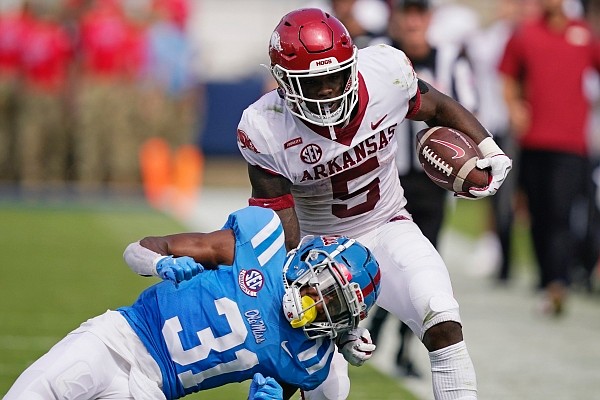 Arkansas running back Raheim Sanders (5) is knocked out of bounds by Mississippi defensive back Jaylon Jones (31) during the second half of an NCAA college football game, Saturday, Oct. 9, 2021, in Oxford, Miss. Mississippi won 52-51. (AP Photo/Rogelio V. Solis)

The manner in which the ESPN broadcast crew was raving about Ole Miss quarterback Matt Corral might lead some casual college football fans to believe he is an all-world player, while Arkansas’ KJ Jefferson is a complete afterthought.

Corral played well against the Razorbacks in the Rebels’ thrilling 52-51 win, finishing with 287 passing yards and 2 touchdowns, and 94 rushing yards and 2 more touchdowns. He made huge throws down the stretch — the 68-yarder to Braylon Sanders for a touchdown as well as on fourth down — and key plays with his feet. Without a doubt he was a thorn in Arkansas’ side

The case can be made that Jefferson outperformed Corral.

Jefferson totaled 326 yards through the air and 3 scores against 1 interception (on a Hail Mary), and 85 yards rushing to go with 3 touchdowns, including 2 that were unbelievable effort plays. Part of it may have something to do with the Ole Miss defense and its limitations, but Jefferson was as in control of the game Saturday as he’s been in his career.

The Razorbacks’ offense could essentially do as it pleased when Jefferson was in charge, which is why it racked up 676 total yards and 7.3 yards per play. In the game’s final moments when Arkansas was down a touchdown, Jefferson was calm and collected. He radiated confidence.

He’d have been the hero if Arkansas’ two-point conversion play with no time left had been executed at a higher level.

Earlier this week, Pro Football Focus ranked Jefferson the No. 84 quarterback out of the 130 starters across the Football Bowl Subdivision. It seemed silly then and looks even sillier now. He certainly needs more work in certain areas and polish in the passing game, but he’s no bottom-tier quarterback.

Something else to think about: in two of Jefferson’s last seven starts dating to the Missouri game last year, he has lost games in which he’s led Arkansas to 48 and 51 points. Instead of a 4-3 mark in that span, he could easily be 6-1.

I think he’d be viewed in a different light across the SEC if Arkansas’ defense had come up with a single key stop in those shootout losses.

Raheim Sanders is going to be a special player

We’d seen glimpses and moments from Raheim "Rocket" Sanders throughout the first five games on the Razorbacks’ schedule. Whether it was his first career carry, which went for 10-plus yards and a first down after seeking out a Rice defensive back, or the 26-yard touchdown run against Texas, you could just tell there’s something different about the freshman.

If you weren’t sold after the plays mentioned above, maybe the 20-plus yard gain in the passing game against Georgia in Week 5 did it for you. On Saturday at Ole Miss, he had his first complete game.

Sanders finished with a career-high 139 yards on 17 carries. That was an average of 8.2 yards per carry in his second SEC game.

Sanders totaled seven runs of seven-plus yards. In the second quarter, he reeled off a run of 21 yards. In the third, Sanders went for 42 yards to the Ole Miss 23, and in the fourth went for 13 yards as he helped the Razorbacks tie the game 45-45.

The increase in carries for Sanders was nice to see. It’s obvious he is incredibly gifted as a runner, and his burst is phenomenal. It's no secret why he earned his nickname.

The 17 carries he got at Ole Miss were five more than he received against Texas A&M and Georgia combined. I think he touched the football more Saturday because he’s getting better at getting upfield quickly. And he’s tough, both physically and mentally.

He lost the first fumble of his career early in the game, but he rallied and played his tail off the rest of the way.

“I thought he was really tough,” Arkansas coach Sam Pittman said. “He's getting better. He's a guy everybody in the room can count on. He averaged (eight) yards, or a little over (eight) yards, per carry. Just a tough, young kid that's going to be a really good player for us.

Production from the Razorbacks’ tight ends has been pretty nonexistent in recent weeks in terms of statistics. It has also been fairly clear Arkansas’ staff is searching for answers to add another dimension to the offense.

Entering the weekend, Blake Kern was the only player at the position with a catch. He has 5 for 61 yards for the season, but just 1 for 18 yards in the previous two weeks.

Trey Knox, the former big-time receiver prospect who moved to tight end a couple of weeks into the season, gave coaches and fans a reason to be excited about the position again. He brought in 5 passes — 2 fewer than he had in all of 2020 — for 37 yards and a 3-yard touchdown in the third quarter.

It was his first touchdown since the program’s 2019 season finale against Missouri in Little Rock. That seems like ages ago.

Knox had been performing fairly well in games prior to this week, particularly as a run blocker and player who could serve as a decoy in certain sets and formations. Pittman said earlier this week that Knox is great with his hands in run blocking.

On Saturday he finally got to use those hands to catch throws from Jefferson and show he can be a real asset in the passing game moving forward. This performance is potentially a big development in the Razorbacks’ tight ends room.

Knox can be a real mismatch issue for opposing defenses. We’ll have to see if his role will grow after this effort or if this is a one-time thing. I’m thinking it will be the former.

Opponents — Ole Miss in particular — have been able to burn Arkansas with the big play in recent weeks.

In the first several games of the season it did not seem like a huge deal that Georgia Southern and Texas A&M both scored on long plays because those long plays were the only times those teams found the end zone against the Razorbacks. Explosive plays allowed are now a concern.

The Rebels’ offense, which can be as quick-strike as any in the country, hit Arkansas for big-play scores four different times Saturday, two through the air and two on the ground. Corral found his top targets Dontario Drummond and Braylon Sanders for scores of 67 and 68 yards.

Rebels tailback Snoop Conner added the chunk-yardage scores on the ground, finding the end zone from 51 and 34 yards in the second half.

Including a 76-yard run by Georgia Southern’s Justin Tomlin and 67-yarder by Texas A&M’s Isaiah Spiller, the Razorbacks have now given up 4 touchdowns of 67-plus yards in the last four games. That does not sit well with Pittman or linebacker Hayden Henry, who had 11 tackles and 2 tackles for loss.

Henry said Ole Miss simply executed its plan better than Arkansas did its own. Pittman noted the Razorbacks just got beat over the top because the Rebels were also having a good bit of success with their run game.

One other thing with Arkansas’ defense: it has only one traditional takeaway in the last four games. The Razorbacks have to create a little more havoc and luck for themselves in the coming weeks.

Arkansas got Pittman’s point about penalties

In the Razorbacks’ loss to No. 2 Georgia, their penalty troubles were troubling. Arkansas was hit with 19 penalties. Thirteen of them were accepted for 101 yards.

In essentially every media availability Pittman had throughout the week leading up to the Ole Miss game, he was asked about the flags his team was accruing each week and how they would be fixed. Were they a concern of his? Of course.

Well, whatever he and his staff did, it worked. Officials flagged the Razorbacks only four times Saturday for 25 yards. Two of them came on the team’s first offensive series of the game.

And there was just one miscue on special teams, a holding call on Jacorrei Turner in the fourth quarter that brought an AJ Green kickoff return from the Arkansas 24 to the Arkansas 14.

These teams entered the weekend two of the most penalized in America. Ole Miss lived up to that billing — eight for 75 yards — while the Razorbacks took an encouraging step forward.

The lack of offensive penalties for Arkansas helped it end the day with a remarkable amount of yards both on the ground and in the passing game. Pittman has to be proud of the progress in this area.